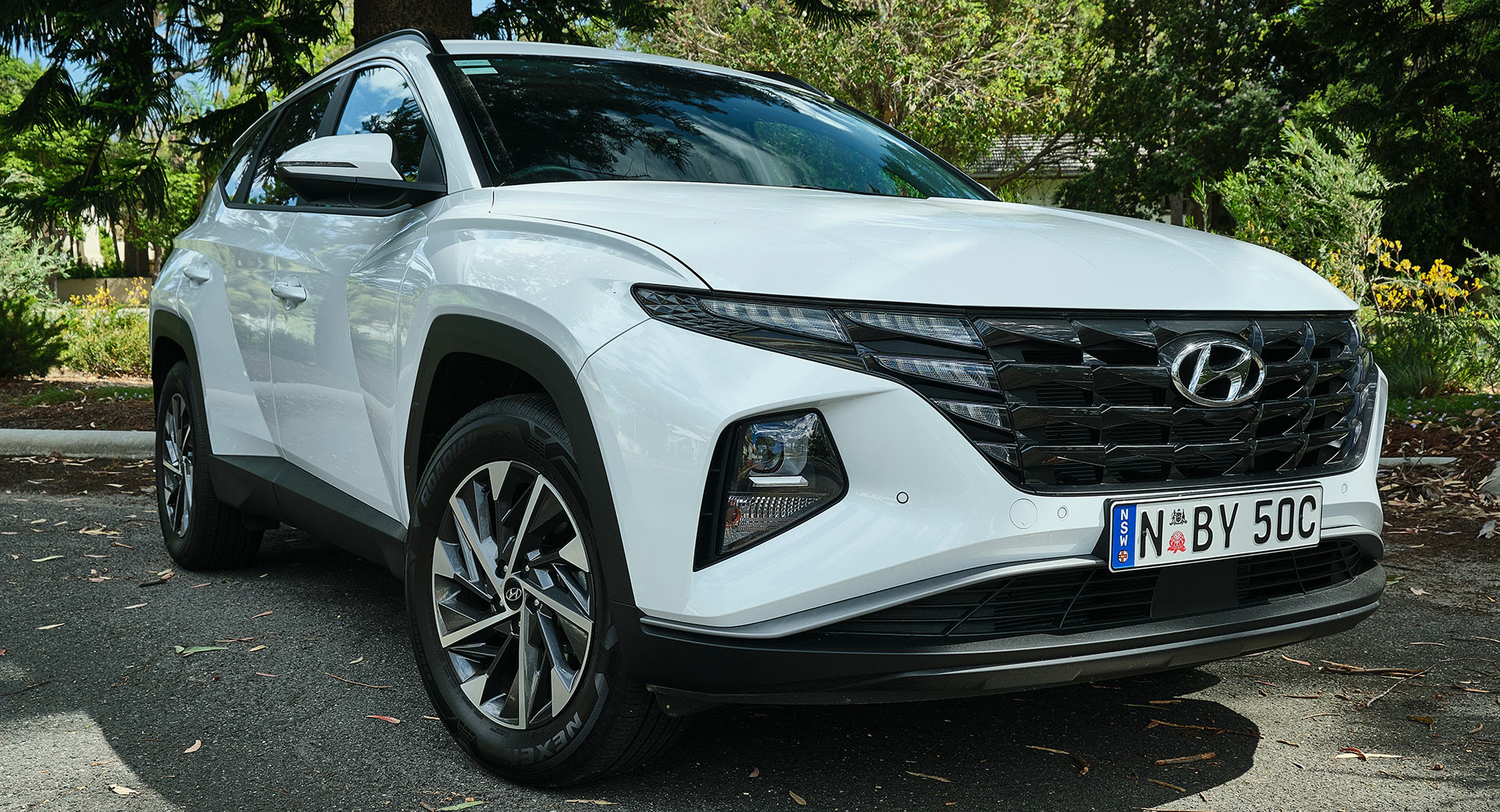 One could have excused Hyundai for playing it safe with the fourth-generation Tucson. After all, it is one of the brand’s most popular models and, usually, one does not mess with a successful recipe. Despite this, Hyundai did very much the opposite with the new Tucson, making it stand out on the road with striking exterior and interior looks.

The South Korean car manufacturer introduced its new ‘jewel-like’ grille with the 2021 Tucson, a feature that has since been adopted with the Santa Cruz pickup truck and could be used by the facelifted Palisade. This is much more than a typical grille, however, and cleverly hides the LED daytime running lights into the grille itself, resulting in a truly radical design. 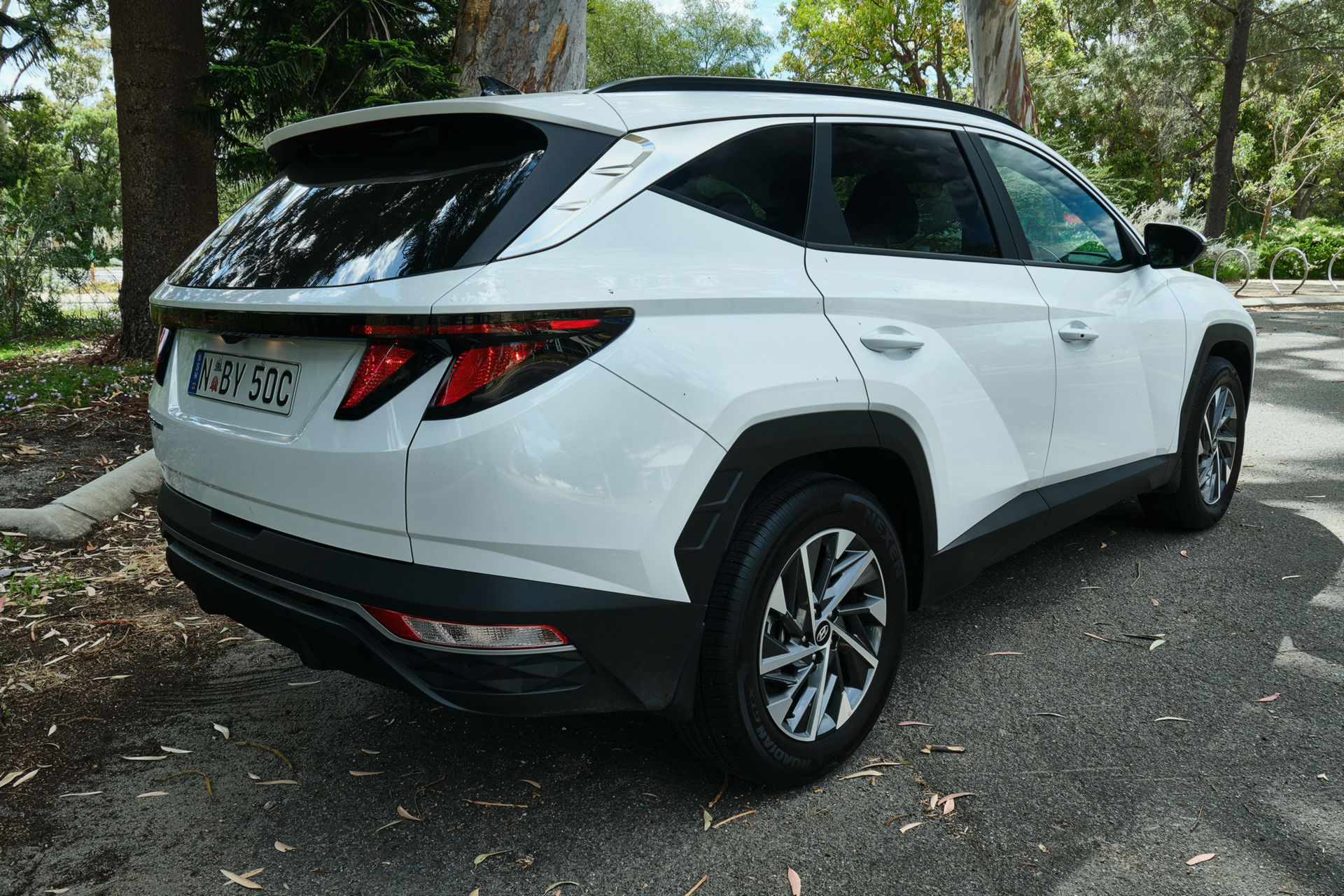 Like some other Hyundai models, the new Tucson sports a split headlight design and the bold looks stretch down the sides. Whereas some car manufacturers are introducing new vehicles with very few body lines and creases, the fourth-generation Tucson goes in the opposite direction and has sharp creases and angles across the doors, wheel arches, and rocker panels. One could argue that the sides of the Tucson have been over-styled but when finished in a light shade such as white, these lines do become less prominent. The bold looks continue at the rear with silver trimmings on the D-pillars, a rooftop spoiler, pointed LED taillights and a full-width light bar.

There’s no denying that the new Tucson stands out, so much so that we were taken aback when we first laid eyes on our tester. Hyundai is boring no more.

Read Also: A Hyundai Tucson Doesn’t Need A Widebody Kit But It Could Look Pretty Awesome With One 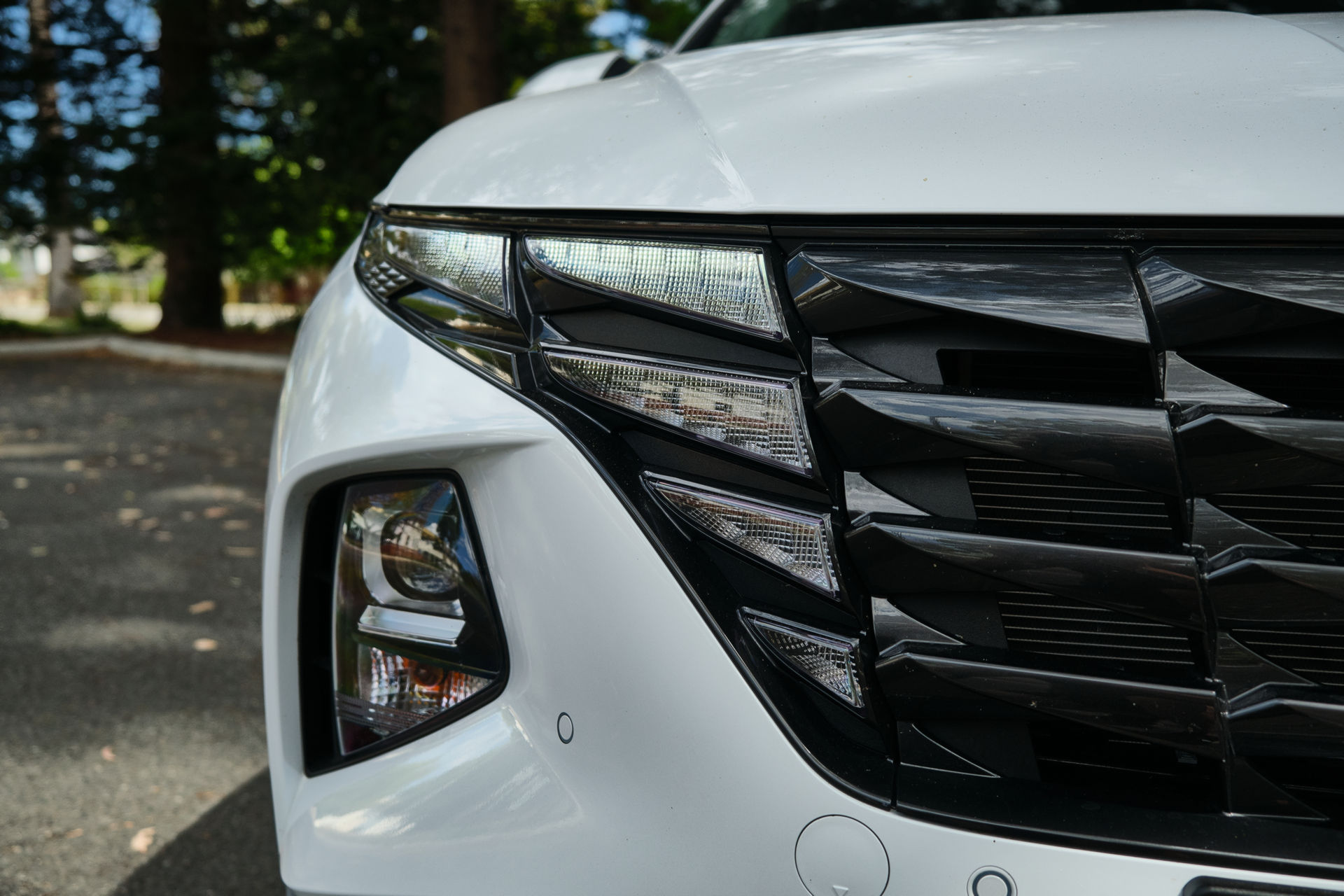 Underpinning the new Tucson, tested here in 2022 Elite specification, is the same N3 platform used by the likes of the Santa Fe, Staria and Santa Cruz, and vehicles from Kia including the Carnival, Sorento, and Sportage. Most markets around the world are offered the new Tucson exclusively in ‘long-wheelbase’ guise, while Europe and Mexico get a special, ‘short wheelbase’ variant.

Loads of powertrains and trim levels on offer 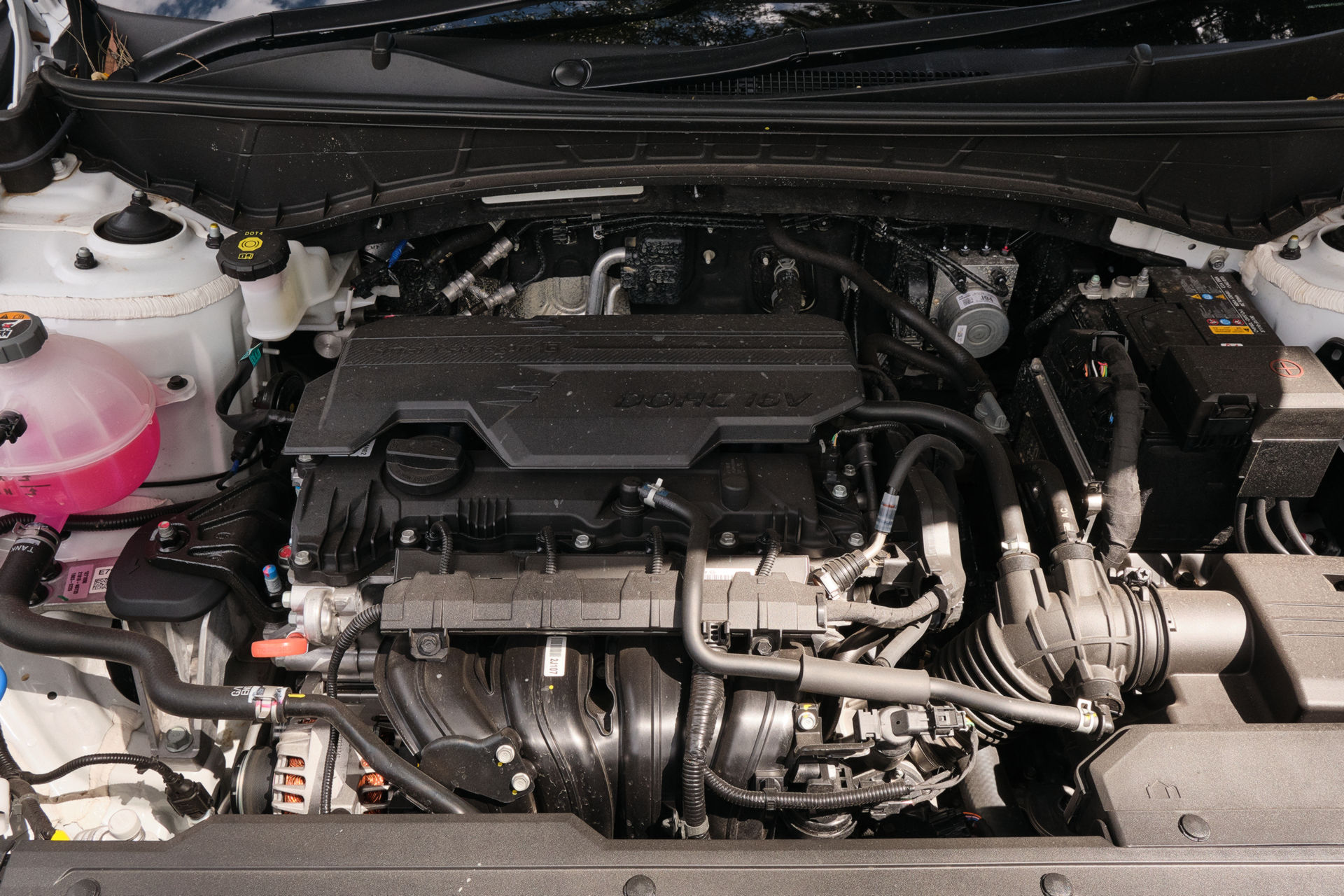 The 2.0-liter petrol engine is sold exclusively with front-wheel drive, while the others get all-wheel drive as standard. 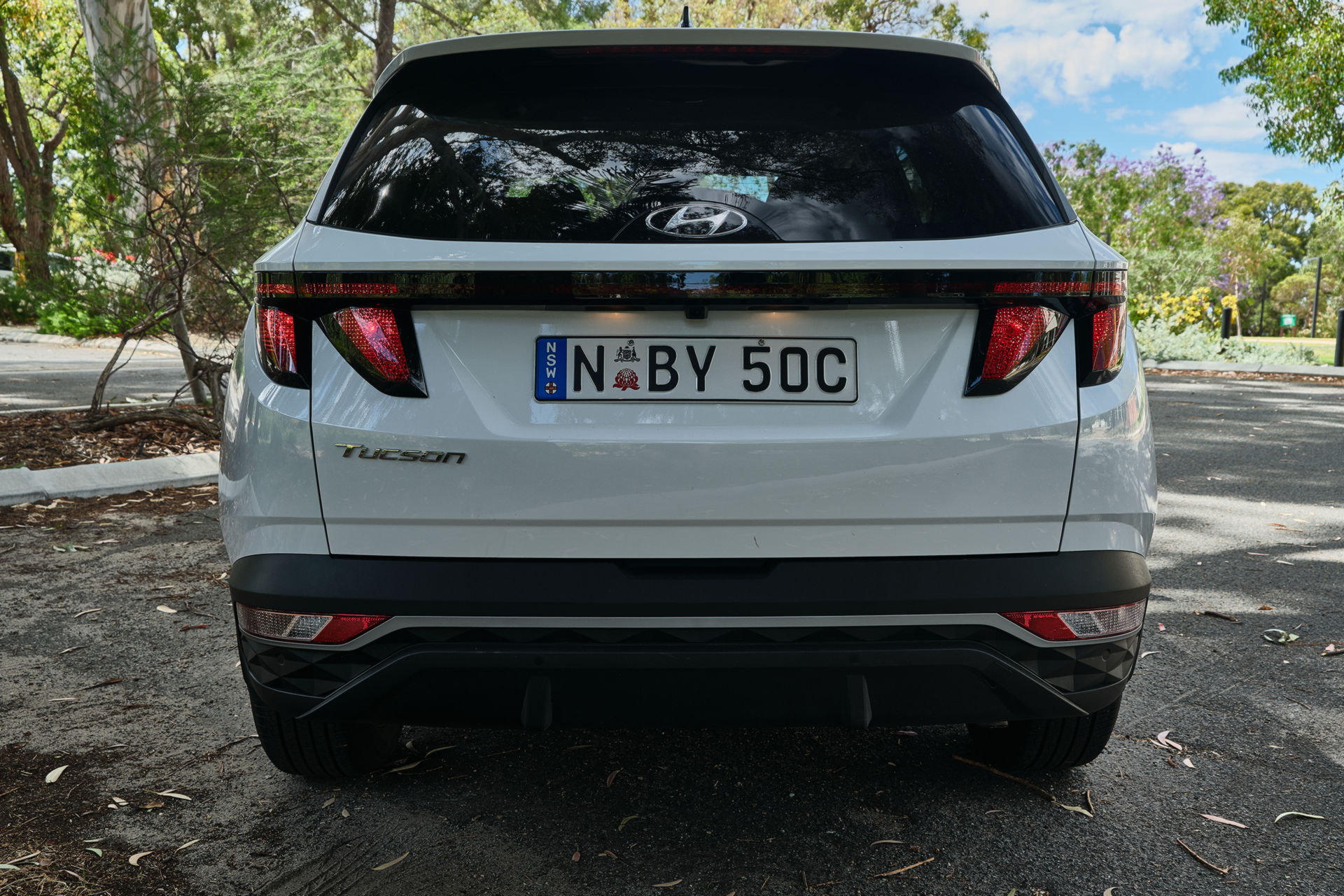 The cabin of the 2022 Tucson is quite impressive and very different from other Hyundai models on the market. However, it will not be to everyone’s taste.

Like so many other vehicles currently on sale, the fourth-generation Tucson eschews traditional buttons, switches, and knobs across the dashboard in favor of touch-sensitive buttons. This philosophy, of course, extends across the 10.25-inch infotainment screen that comes standard with the Elite but is also evident across the rest of the dash. For example, all the media controls below the infotainment display are touch buttons, as are all the settings for the climate control. Making matters worse is the fact that all of these touch buttons are finished in piano black. 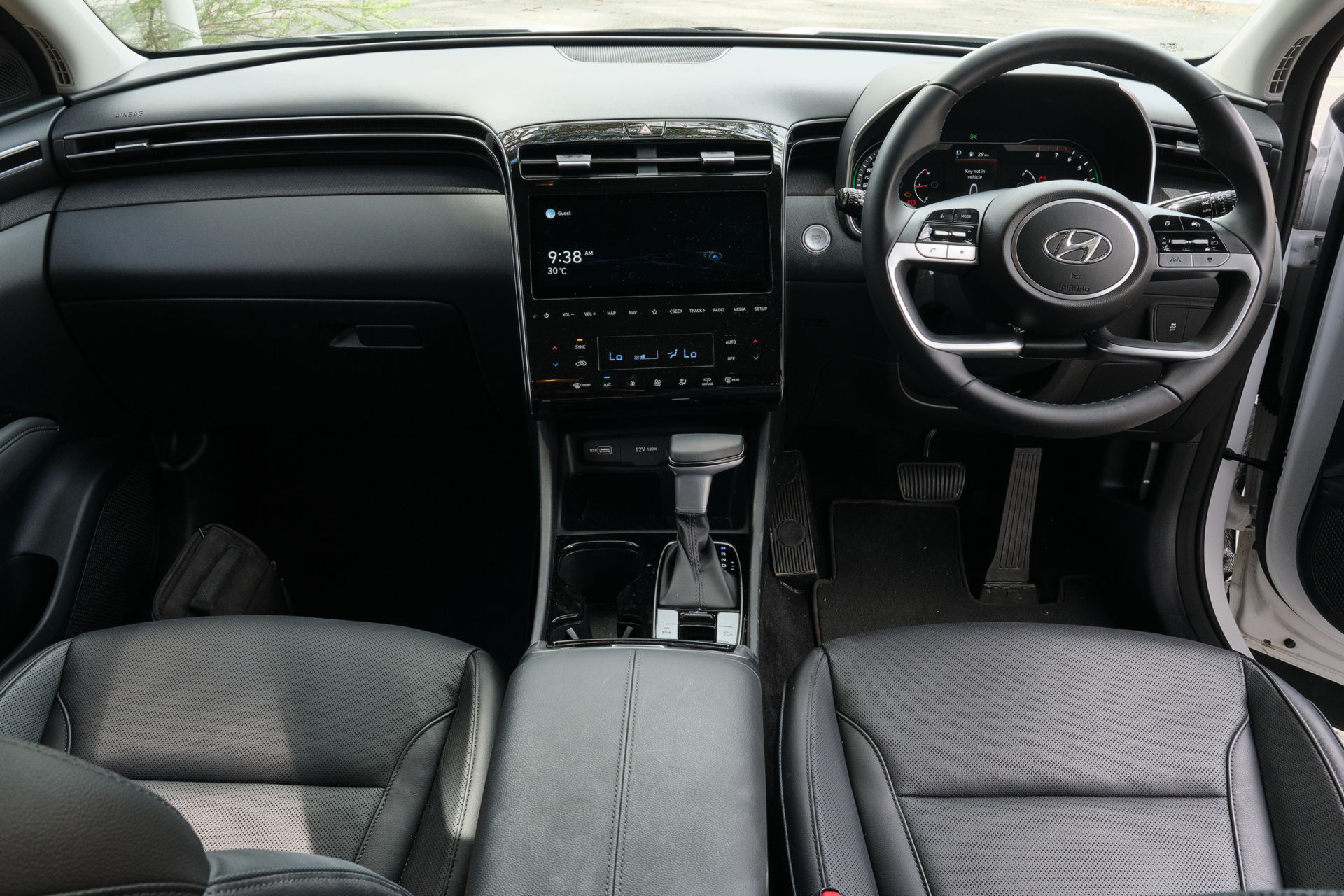 The Ioniq 5, arguably the automaker’s most advanced tech-focused model, has more physical buttons on its dashboard than the Tucson.

With the exception of these touch controls, the rest of the cabin is nice. The dashboard looks particularly sleek and hides the air vents into its design. The four-spoke steering wheel looks a little odd at first but is comfortable to use with your hands in the 9 and 3 positions. Found elsewhere throughout the cabin are a number of soft-touch surfaces finished in plush black leather. There are also plenty of USB-A outlets, cup holders, and a second row that offers up 1,050 mm (41.3-inches) of legroom for passengers. At 6’2”, I had plenty of room in the rear and didn’t feel cramped at all. There is also plenty of cargo space with 539 liters (19 cubic-feet) of space in the trunk and 1,860 liters (65.6 cubic-feet) with the rear seats folded down. 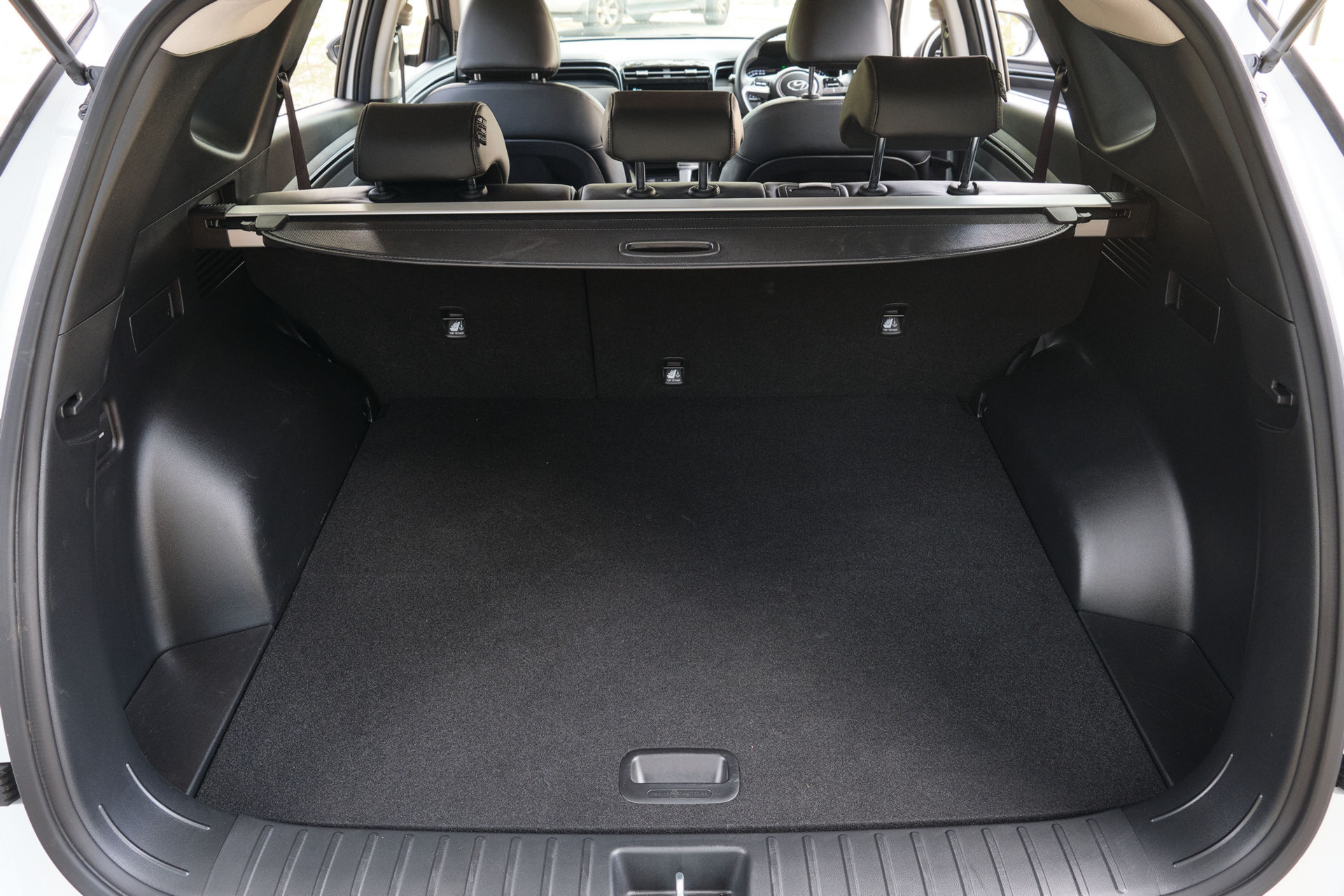 How does it drive?

Out on the open road, the 2022 Tucson Elite proved itself to be a very capable SUV but it is not without fault.

First, there’s the engine. The entry-level 2.0-liter four-cylinder is more than adequate for simple, everyday driving duties and works well alongside the six-speed automatic transmission. While it would be nice if this powertrain package could be coupled with an all-wheel drive system to broaden its appeal and versatility, the front-wheel drive system does the job. 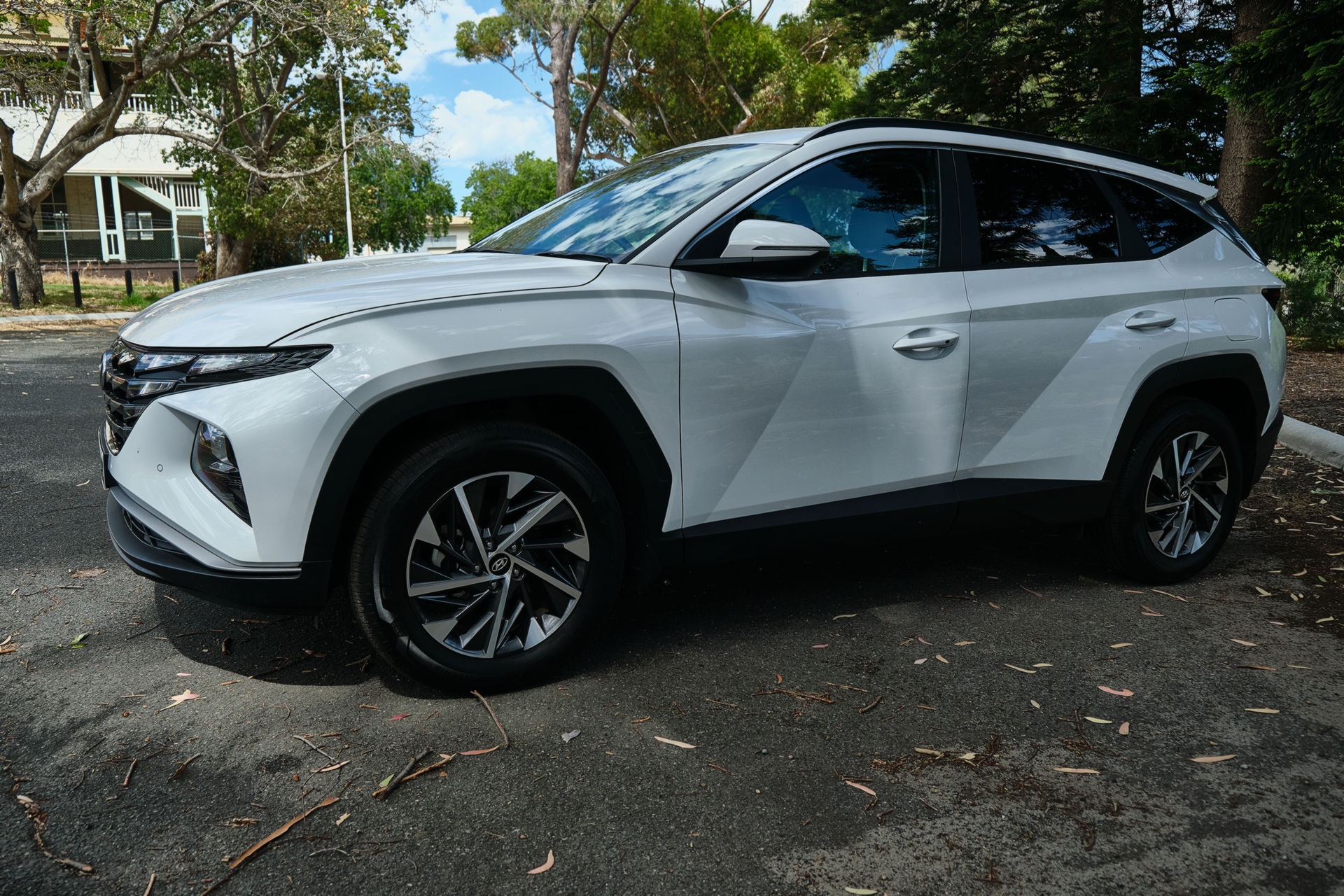 As the figures of the 2.0-liter engine suggests, it isn’t what anyone would consider quick nor is it particularly characterful – not that this will be a concern for most shoppers.

One surprising aspect of the 2022 Tucson was its ride and handling credentials. New Hyundai models sold in Australia often receive a unique suspension tune to make them better suited to local conditions and road surfaces. However, the latest Tucson has not received such a tune and has the same suspension setup as in other markets. We’re not sure how it rides in other corners of the globe but Down Under, the ride is firmer than we were expecting. It isn’t firm per se but it’s probably slightly stiffer than some consumers would expect. With this being said, it is still very comfortable and the solid ride does have a positive effect on the handling.

While no one will be fooled into thinking this is a product from Hyundai’s N division, the Tucson Elite feels very responsive through corners. The steering offers a good level of weight and encourages you to tip the SUV slightly harder into corners than you may expect. 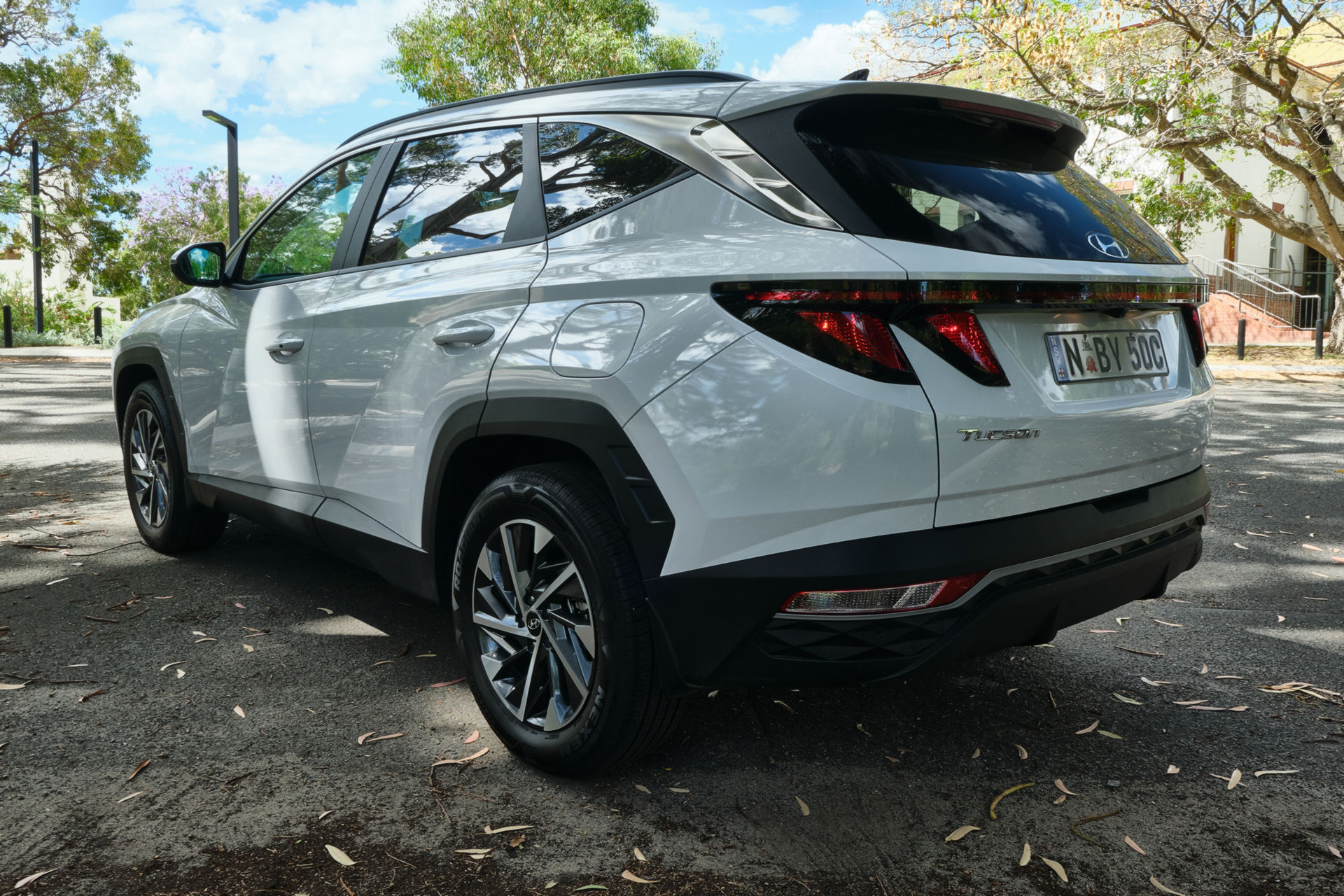 So, what’s the verdict? All in all, the fourth-generation Hyundai Tucson is a very competitive vehicle in its class and improves on its predecessor in all areas. It’s just a shame that it has become quite pricey. 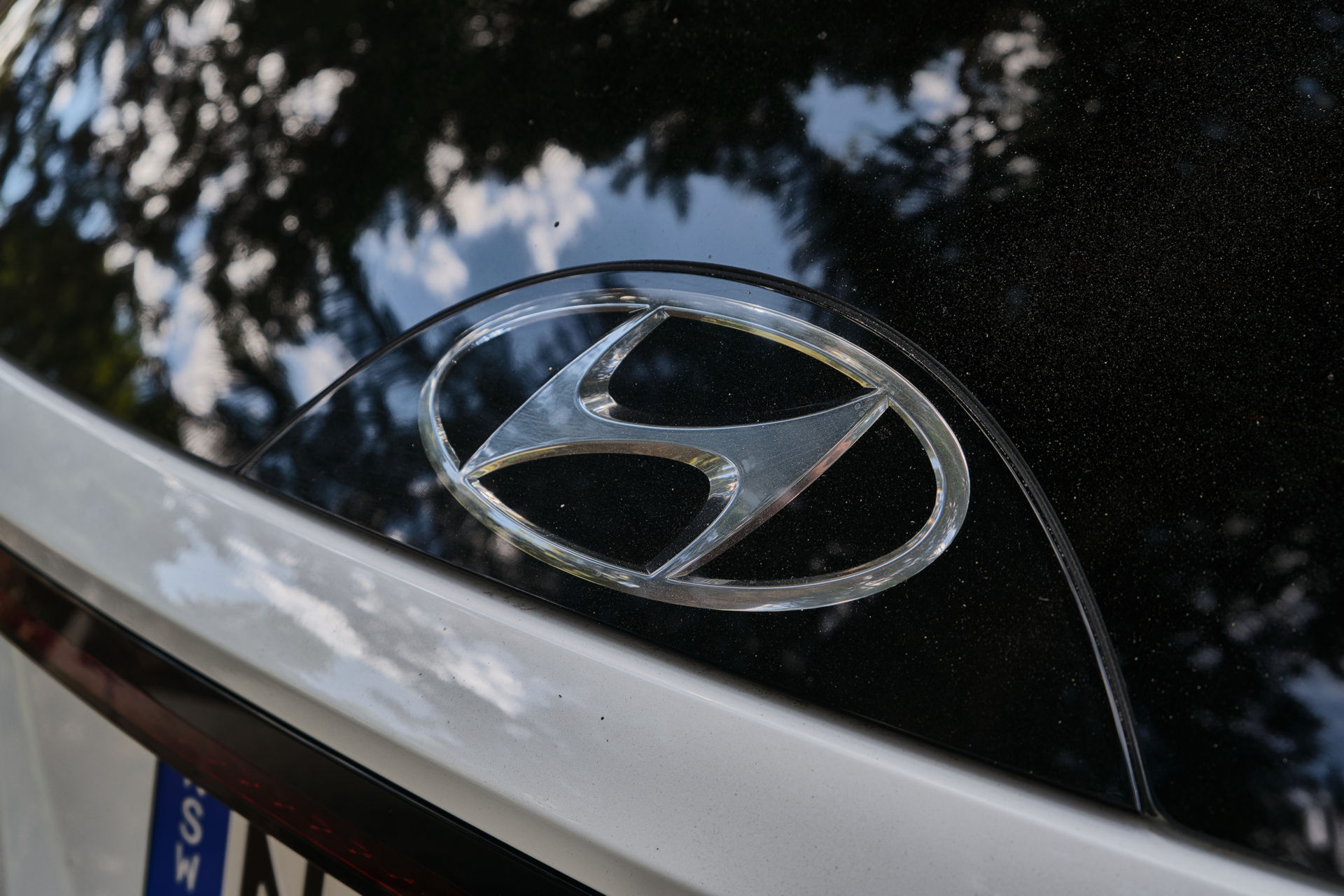