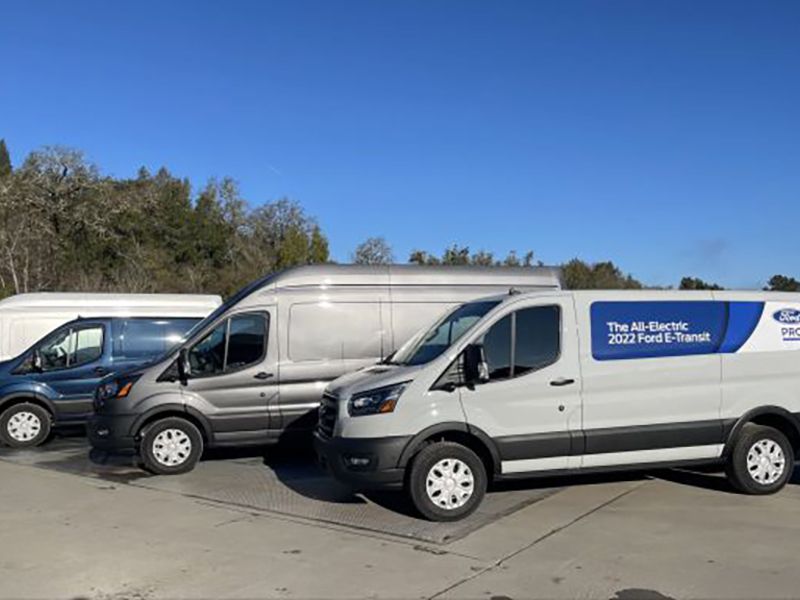 SEBASTOPOL, Calif. — Ford Motor Co. has booked 10,000 orders for the 2022 E-Transit electric van from about 300 commercial and government customers, including retail giant Walmart.

Ford will soon begin customer deliveries of the electric vehicle, which starts at $44,900 including shipping and comes in eight configurations. The automaker until now had not disclosed order numbers for the vehicle, which is to be a key part of a new Ford Pro commercial business subsidiary.

In addition to the orders, Ford on Wednesday said it would launch a pilot program with three California farms to test new commercial EVs for a year. The three businesses will each be given an E-Transit and F-150 Lightning to use, along with Ford Pro charging stations and telematics services.

Ford is attempting to transition its high-margin commercial business to electrification and add a suite of software services to build on its leading commercial truck and van market share. Cannis said Ford has roughly 125,000 fleet customers in the U.S. serviced by 650 commercial vehicle centers.

“We’re in a totally unique position to dominate the light-duty commercial vehicle business,” Ford CEO Jim Farley said in a media presentation here Tuesday. “Commercial customers have very different needs, but most automakers sell to them watered-down versions of their retail offerings, and that is a strategic mistake.”

The automaker hopes the Ford Pro business can be a one-stop shop for customers by selling them not only vehicles but a suite of subscription services to better manage their businesses, all built off a proprietary software platform called Ford Pro Intelligence. Those services include charging, telematics, security systems and digital field service tools.

“Our vehicles will still be really important, but I think loyalty to the brand is going to be driven by the software experience,” Farley said. Business owners “are looking for 100 percent uptime. These are productive tools for them.”