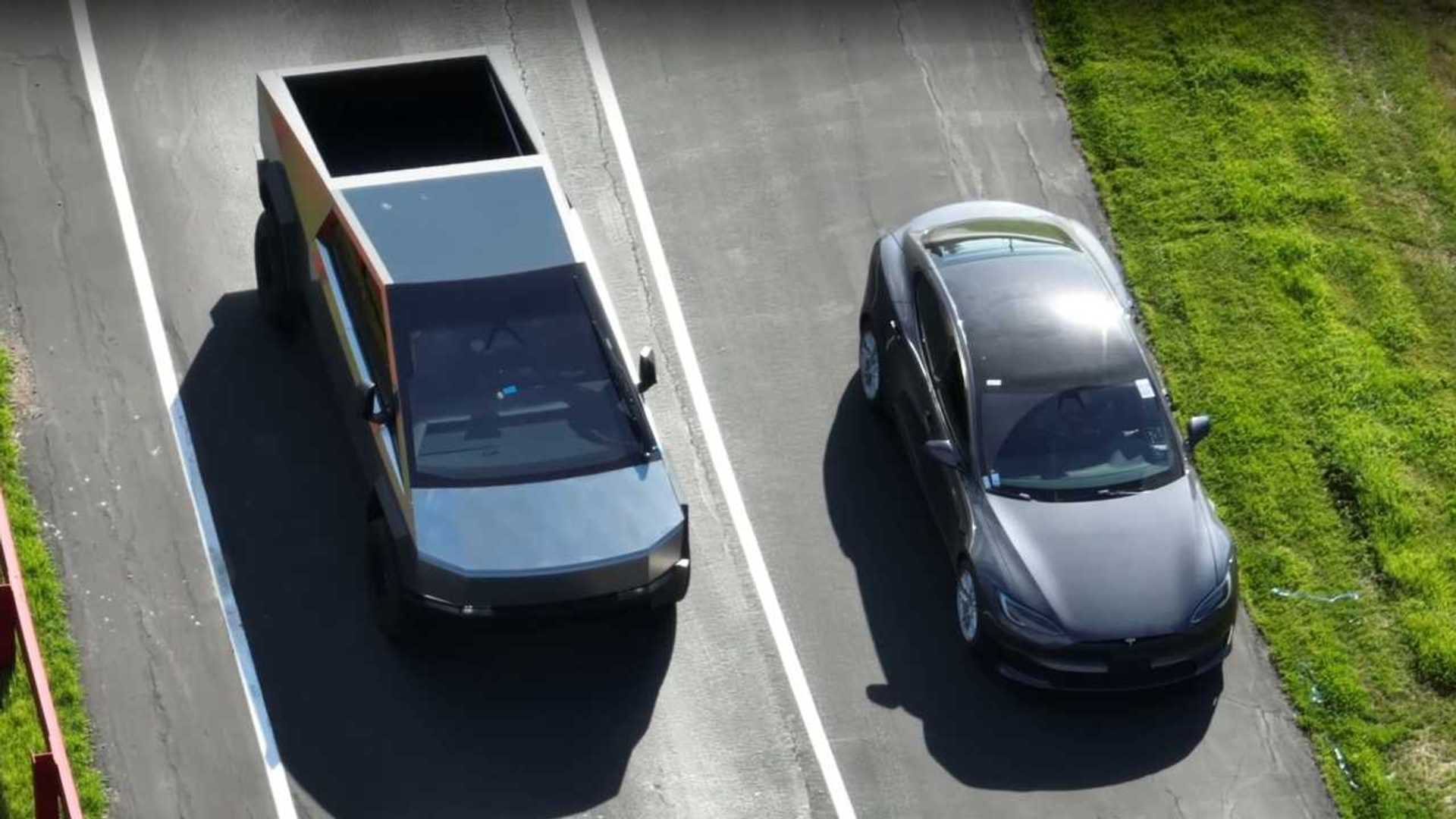 Where’s Cybertruck? According to The Verge, “reference to a 2022 production schedule was scrubbed” from Tesla’s website. Now it appears it may be delayed once again, until 2023. Nevertheless, Elon Musk promised to share a “product roadmap update” on Tesla’s next earnings call (scheduled for January 26th). Hmmm, mysterious. So what’s going on here?

Above: a look at Tesla’s Cybertruck (Source: Tesla)

Well, Tesla has been somewhat guarded about the Cybertruck. That said, an iteration of Tesla’s much-anticipated pickup was recently spotted at the Fremont factory test track. Hence, some clues were revealed. A few updated features were spied during a drone flyover of the location (video footage below).

Besides a few design tweaks, this particular Cybertruck prototype was seen with some tape that likely includes hidden sensors. This hints (perhaps) at Tesla doing some calibration testing of the Cybertruck.

The most visible change evidenced while viewing this latest version of the Cybertruck prototype was the large single windshield wiper installed on the driver’s side. This is the first time that a Cybertruck has been spotted with a windshield wiper since its unveiling back in 2019.

However, Musk noted that this windshield wiper would not be seen on the production version. He commented, “That is not the production wiper… The wiper is what troubles me most. No easy solution. Deployable wiper that stows in front trunk would be ideal, but complex.”

Looking at the dashboard through the windshield, it looks like the marble design of the dash is not going to make it to production either. And, unlike the original Cybertruck prototype, this one has proper side mirrors.

Another significant change looks to be the addition of daytime running lamps (DRLs) on the front fascia. Previously, there was a horizontal light bar installed on the roof. The roof light bar doesn’t appear to be making it to production anymore.

Above: A deep dive into the latest updates, leaks, and news related to Cybertruck (YouTube: The Tesla Space)

The bed of the Cybertruck seems to have shrunk a little in length as well. Some Cybertruck critics are concerned that the vehicle would be too large for a garage. Tesla might have cut a couple of inches from the bed but it’s not officially confirmed yet.

The door handles were not visible on this latest prototype either. Cybertruck had flush but visible door handles from the start. However, Tesla may have gotten rid of them all together now. Earlier this year, Elon Musk had confirmed that the production Cybertrucks will not have door handles — it will simply open the doors as the owner walks up to the vehicle.

Are there any other color options likely? “Cybertruck can have any color you want, so long as it’s nothing,” Elon Musk noted about the stainless steel Cybertruck. However, the Cybertruck can be vinyl wrapped in any color.

So will the Cybertruck have color options from the factory? “Not at first, but there are many third-party options for wrapping,” Elon Musk replied in a tweet. Talking about a cool Cybertruck wrap option, “Imbued gold/bronze color would be sick,” Musk noted in another tweet.

It looks like Tesla already has a large backlog of more than 1.2 million Cybertruck pre-orders worth above $81 billion. Giga Texas will be the first and the only Tesla factory for a while where the Cybertruck will be built. And, Elon Musk gave out some hints about a new Quad Motor variant.

In any event, since Tesla decided to start Model Y production at Giga Texas first, Cybertruck production is definitely delayed. Until Tesla’s upcoming earnings call, we’ll have to wait for more.

Written by: Iqtidar Ali. An earlier version of this article was originally published by Tesla Oracle. Revised update edited by EVANNEX.