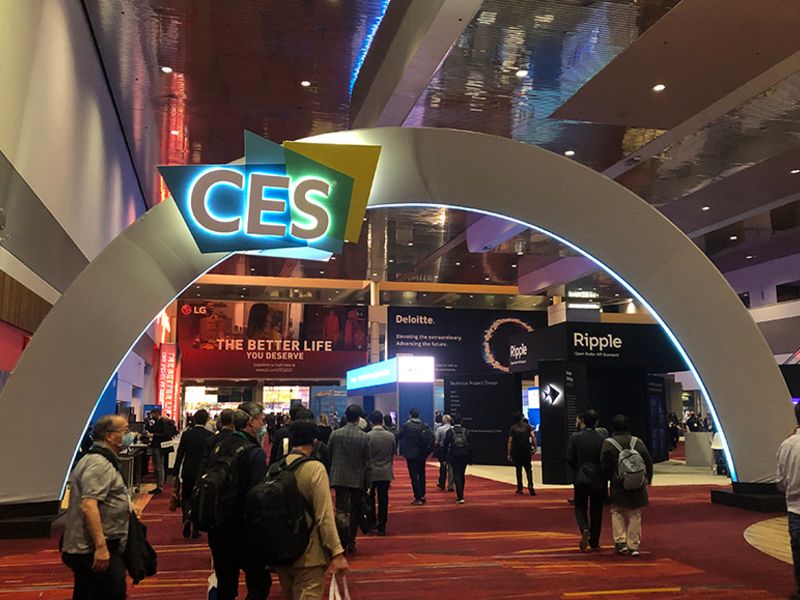 CES, the annual technology showcase in Las Vegas, made a partial in-person return this year. Several companies switched to online reveals and briefings due to the rise of the omicron variant of the virus that causes COVID-19.

Here’s a rundown of the automotive and mobility technology news from the show, both live and virtual:

Cadillac’s vision for the future is a reputation based on the experience of the journey rather than the vehicle itself. GM’s luxury brand showcased the latest addition to its Cadillac Halo Concept Portfolio during CES this week with the InnerSpace, a two-passenger autonomous, electric luxury concept vehicle that features nearly full views through a panoramic glass roof and part of the body sides and a massive LED display for augmented reality engagement, entertainment or wellness recovery. it also also teased the OpenSpace, a vehicle that gives passengers a place to stay while traveling.

Watch a replay from our LinkedIn Live chat on the most significant developments at CES 2022.

Major automakers such as General Motors, Ford Motor Co. and Volvo Cars deepened ties with key technology partners this week to gird for the upcoming fights against Tesla and Apple. Three chip firms — Intel Corp.’s Mobileye, Qualcomm Inc. and Nvidia Corp. — emerged from a raft of announcements at the CES in Las Vegas in locking down the brains of self-driving cars for the next decade.

The U.S. Department of Transportation has set six guiding principles for balancing the federal government’s role with ongoing innovation in the transportation sector.

Automotive tech company Aptiv showcased at CES how it is positioned for the wider adoption of software-based vehicle technologies. Aptiv’s virtual and on-site presentation at the Las Vegas event included a demonstration of several use cases for the company’s software applications in vehicle architecture, such as using artificial intelligence and machine learning to enhance Aptiv’s radar system.

Mercedes-Benz could bring an electric vehicle with more than 620 miles of range to the market by mid-decade. The automaker said it has developed a beefy battery that can power a vehicle from New York to Cincinnati on a single charge.

Vietnamese automaker VinFast is offering a sizable bonus to U.S. buyers willing to make a small deposit while they wait for their electric crossovers to arrive, presumably by the end of the year.

Volvo Cars will make what it calls “unsupervised autonomous driving” available first to customers in California before rolling it out in other markets.

General Motors plans to launch three Chevrolet EVs next year, priced from $30,000 to more than $100,000. The automaker also says it plans to expand BrightDrop, its EV delivery brand.

The Chevrolet Silverado EV will have more than 400 miles of driving range and Super Cruise driver-assist technology and be able to tow up to 10,000 pounds. General Motors said the truck can gain 100 miles of range in 10 minutes through a DC fast charger.

Stellantis said it is linking with Amazon to help spearhead its vehicle software push and get the electric Ram ProMaster van on the road next year to make deliveries in a series multi-year agreements.

Diversified auto supplier Magna International Inc. said it will set up a new EV center at its U.S. headquarters as it gears up for the launch of its electric powertrain system for trucks in 2025.

Sony Group plans to launch a company this spring to examine entering the electric vehicle market, looking to harness its strengths in entertainment and sensors to play a bigger role in next-generation mobility.

The product-starved Stellantis brand is providing a glimpse of its EV future, showing the Airflow, an electric crossover concept, at CES.

BMW will introduce a more powerful version of its iX electric crossover. The 2023 BMW iX M60 arrives at U.S. dealerships in June. BMW said the starting price is $105,100 plus $995 destination and handling.

Hyundai Motor Co. is leveraging its robotics expertise to develop scalable mobility platforms that can employ a single module to move a video screen across the room or multiple units to create a personal transportation pod for short distances.

Electric commercial truckmaker Volta Trucks has partnered with Here Technologies on a navigation system it says will make its deliveries more efficient and precise.

Mobileye, Intel’s autonomous driving unit, is partnering with a number of automakers on driver assist and autonomous vehicle technologies expected on production vehicles in the coming years.

ZF plans to supply an advanced driver-assist system to the Vietnamese electric vehicle startup VinFast that can be upgraded to automated driving capabilities.

German auto supplier Robert Bosch sees artificial intelligence and connected products working in tandem to boost the revenue it generates from services in the future, the company’s chief digital officer said at CES.

Mercedes-Benz has revealed its 620-mile-plus Vision EQXX EV concept that the luxury automaker claims is its “most efficient and aerodynamic vehicle.”

For highly automated cars, seeing what’s ahead of and around the vehicle is critical. But seeing unoccupied space can provide a more complete picture — by literally filling in the blanks. Arbe Robotics Ltd., a leader in 4D imaging radar systems for advanced driver-assist systems and autonomous driving, plans to highlight its free-space mapping, a critical refinement to its perception programming and sensors, this week at CES.

Delivery remains a prime focus for autonomous-vehicle operators. One company continuing its push in that area is Udelv, a Bay Area startup that showed its vehicle Monday at CES.

While competitors are building vehicles intended to serve one or two customers per trip, Udelv’s “Transporter” is shaped like a small bus and built to make as many as 80 stops per cycle and travel at highway speeds.

The vehicle can carry 2,000 pounds of goods and cover between 160 and 300 miles per run, depending on the battery pack chosen by operators.

Udelv says it has 1,000 reservations for the Transporter, which counts Intel subsidiary Mobileye as its provider of self-driving systems. It’s the third generation of the vehicle from Udelv, which was founded in 2016. Early customers for the vehicle include Ziegler Group and the U.S. Air Force.

While Udelv has said it aims to start production in 2023 and have 50,000 Transporters operating on public roads by 2028, the company has not yet detailed manufacturing partners or plans.

Electric vehicle company Indigo Technologies says it will unveil two new vehicle designs at CES. The company, which was founded in 2010, said in a press release that its robotic wheels will allow the new cars to have the lowest cost-per-mile of any other vehicle in their class.

The new designs, called the Indigo Flow and Flow Plus, will provide more than 250 miles of range on a 40-kilowatt-hour battery. The company says the patented robotic wheels will also allow for a smoother ride and more spacious car when compared with other vehicles of a similar size.

Indigo will target the ride-share and delivery markets and has been in “heavy discussion” with major companies in the space, Indigo Technologies CEO Will Graylin said. The company also announced that former Audi head of innovation product management Volker Kaese has joined Indigo Technologies as chief technology officer.

There’s no shortage of transportation-related headliners for CES. Here’s a look at five intriguing startups worth keeping an eye on during CES and beyond.