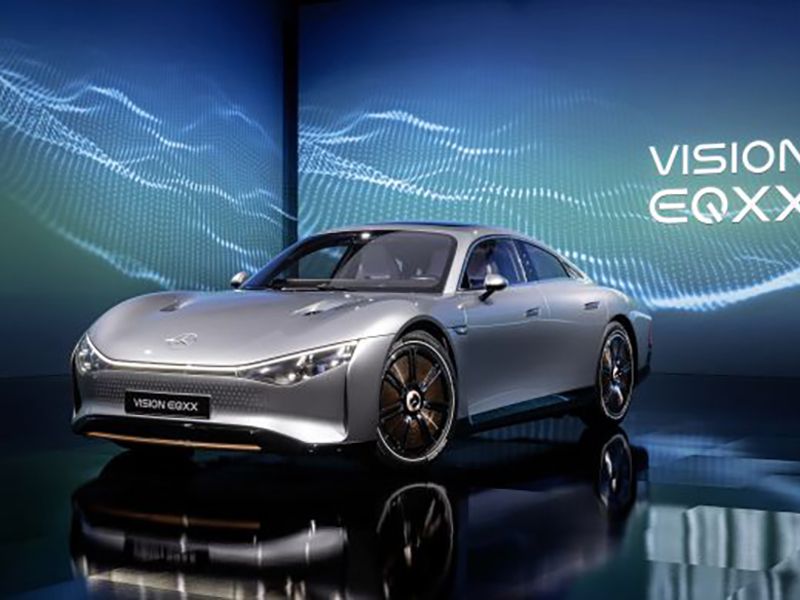 Mercedes-Benz said its battery-powered Vision EQXX prototype, which it says is capable of being driven more than 1,000 km (621 miles) on a single charge, is the “most efficient and aerodynamic vehicle” it has built to date.

The Vision EQXX’s battery and weight-saving technologies are designed to combat the challenge from Tesla.

“This isn’t a show car but a protagonist for technology development,” said Markus Schaefer, Daimler’s head of development. “Mercedes has worked hard in the last few years — it’s our ambition to not only keep up but to be at the top of the game.”

The battery pack holds nearly 100 kilowatt-hours of energy and it has a new chemistry developed with the help of Formula 1 experts from the Mercedes-AMG High Performance Powertrains division in the UK.

The pack has 50 percent less volume and is 30 percent lighter than that of the EQS, the brand’s current flagship electric vehicle. It is small enough to fit into compact vehicles.

It will have energy consumption of less than 10 kilowatt hours (kWh) per 100 km (efficiency of more than 6 miles per kWh), Mercedes said. Tesla’s Model S 60 currently consumes 18.1 kWh over the same distance, data on its website shows.

To achieve increased efficiency without increasing the battery’s footprint, engineers increased the silicon content in the battery anodes. The battery pack was also redesigned to fit more cells while reducing overall weight.

Engineers used a new one-part casting method to form a major aluminum component as the rear of the car, reminiscent of Elon Musk’s much-touted Giga press.

“This project was about breaking down barriers for our designers and engineers to work as a team across different areas and a range of disciplines to share the best ideas,” Schaefer said.

The Vision EQXX has a thermal-management system that helps limit energy loss. A combination of aero shutters, coolant valves and water pumps ensures the electric drivetrain maintains an ideal temperature.

A cooling plate installed in the vehicle floor takes advantage of the air flowing along the underside and helps the Vision EQXX squeeze an additional 19 km (12 miles) of range.

Efficiency improvements are not limited to the drivetrain. “Ultra-thin” solar roof panels help deliver up to 25 km (16 miles) of additional range.

The concept was revealed Monday at an online event and was to be the centerpiece of the brand’s stand at CES in Las Vegas. Mercedes pulled out of the show last week, citing the global spread of the omicron variant of the coronavirus.

The automaker will test-drive the prototype before the middle of the year on various types of terrain, Schaefer said.

Some components of the prototype would be available in Mercedes vehicles within two to three years, he said. However, Schaefer declined to specify when the 1,000 km-range battery would be market-ready.

“We will likely be the first to show a 1,000 km-range car in real life, with such a small battery,” Schaefer said.

When such a vehicle would go on sale is a “market decision” to be determined once the carmaker had established how much range customers expected and what they would be willing to pay, he said.

The Vision EQXX interior is a study in advanced software and sustainable materials.

The cockpit is anchored by a sweeping 47.5-inch high-resolution display that spans the vehicle’s A-pillars.

To reduce energy consumption — important in an electric vehicle — engineers tweaked the speaker layout, positioning them close to the occupants and reducing the distance the sound travels. Two speakers in each headrest, paired with a bass exciter in the seats, not only transmit sound from the music system but haptic feedback and auditory warnings, too.

The floor carpets are made from bamboo fiber, while the door pulls use a high-strength, vegan silk-like fabric.

Mercedes has a goal of only selling fully electric cars by 2030 where possible and has vowed to defend its position as the world’s biggest luxury carmaker with an accelerated 40 billion euro ($45 billion) spending plan.

The company this year unveiled the EQS, the S-Class’s electric sibling, which it says an industry-leading driving range of up to 770 km (478 miles) under Europe’s WLTP testing regime.