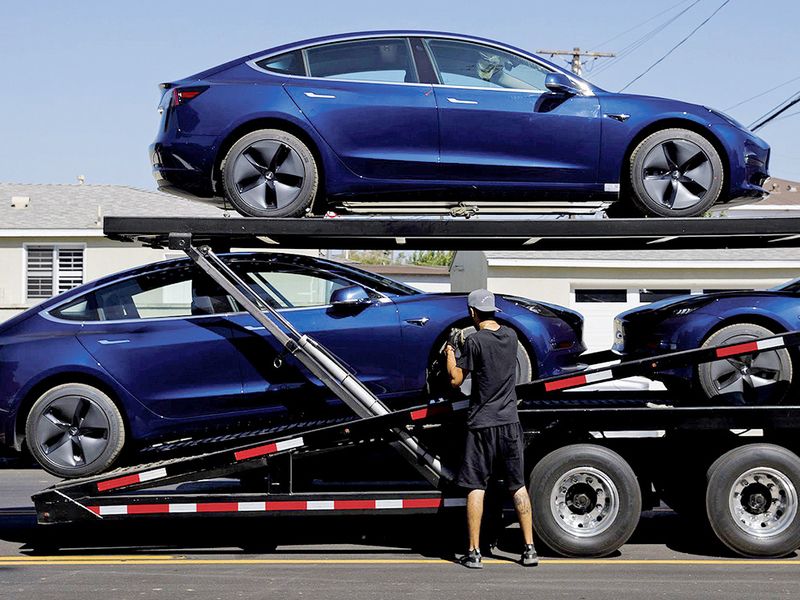 Tesla Inc. delivered 308,600 vehicles worldwide in the fourth quarter, smashing the previous record for the EV maker and setting a capstone on a year in which the company joined the exclusive $1 trillion market valuation club.

The better-than-expected results posted Sunday pushed Tesla’s total sales for the year to more than 936,000, up about 87% over 2020’s deliveries of just under half a million vehicles. Thirteen analysts surveyed by Bloomberg on average had expected about 263,000 vehicles for the quarter, though some had revised their numbers upward in the final days of December.

“This is a trophy-case quarter for Tesla as the company blew away even bull-case expectations,” Daniel Ives, an analyst at Wedbush Securities, said in an e-mailed statement. He called it a “jaw-dropper performance for Musk & Co. in the December quarter with massive tailwinds into 2022.”

Quarterly deliveries are one of the most closely watched indicators for Tesla. They underpin its financial results and are widely seen as a barometer of consumer demand for EVs as a whole because the company has led the charge for battery-powered cars.

The EV market leader’s shares have soared on the back of expectations for continued growth, with the stock up almost 50 percent in 2021 and a market valuation exceeding $1 trillion — one of only five publicly listed U.S.-based companies to achieve that status. The stock fell 1.3 percent on Dec. 31 to close at $1,056.78.

Tesla has said repeatedly it expects 50 percent annual increases in deliveries over a multi-year period. The seventh consecutive quarterly gain comes amid a global semiconductor slump that has crimped production at most other automakers and kept sales in check despite rising demand.

CEO Elon Musk, who became the world’s richest person last year, has described 2021 as a “supply chain nightmare” even as his company continued to grow deliveries each quarter. It has fared better than other automakers due in part to efforts by its engineers to rewrite software to adapt to whatever chips they could find for other purposes.

Tesla has said its delivery counts should be viewed as slightly conservative, and final numbers could vary by 0.5 percent or more.

Deliveries and actual production don’t necessarily match up one-for-one during any given quarter. Production was 305,840 for the fourth quarter and 930,422 for the year.

In 2022, Tesla will be adding production capacity with two new factories coming online in Austin, Texas, and Berlin.

Musk has promised to provide an update on Tesla’s new product plans on the company’s next earnings call.