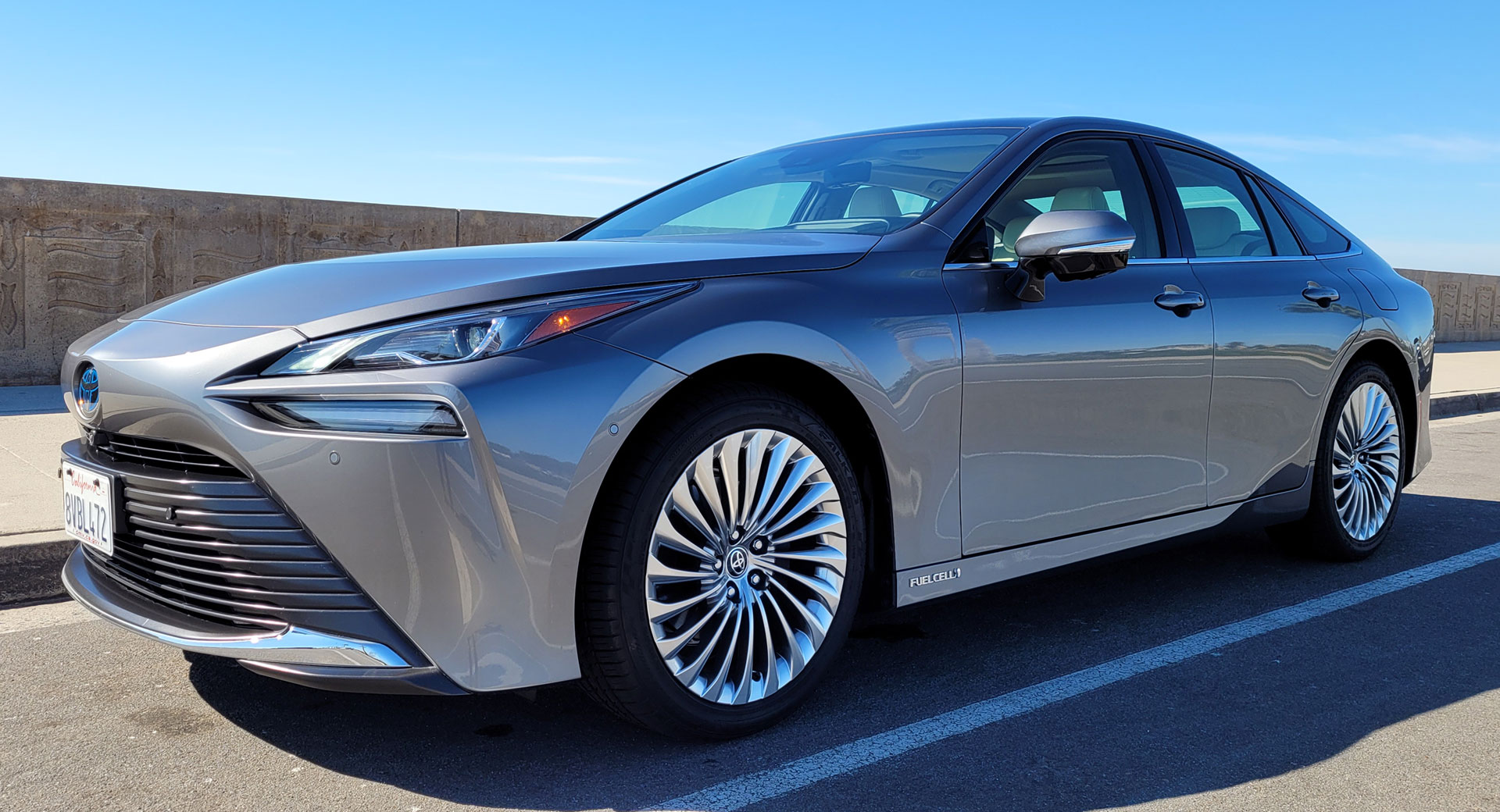 What if I told you there’s an electric vehicle that offers 402 miles (647 km) of range and can be fully ‘recharged’ in approximately five minutes?

You’d probably ask when it’s coming out, but it’s already here as we’re talking about the Toyota Mirai. Meaning “future” in Japanese, the Mirai is a remarkable flagship sedan that mixes luxury and comfort with a fuel cell powertrain.

That’s notable by itself, but Toyota pulled out all the stops when it came to making the second-generation Mirai. As a result, it’s an impressive sedan that hints at what a fuel cell future could look like.

A Toyota That Turns Heads 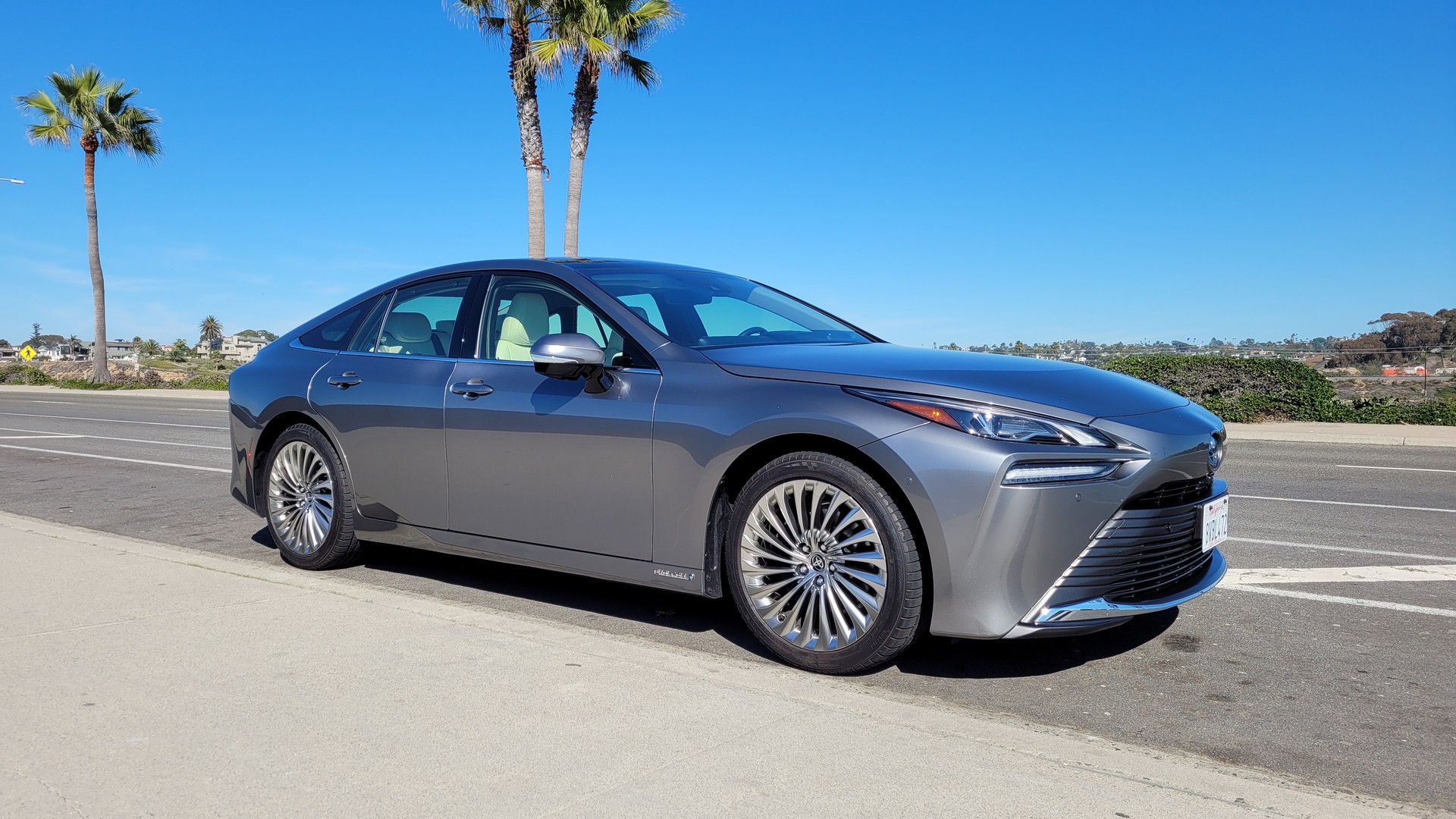 The first-generation Mirai was a lot of things, but beautiful certainly wasn’t one of them. Instead, it was an angular oddity that followed in the footsteps of the Prius and tried too hard to be different.

The second-generation sedan charts a different course as it adopts a striking design that stands out from the crowd, while also looking good doing it. The angular lines have been jettisoned and replaced by soft curves as well as flowing surfaces.

The front end features a shark-like design with a protruding nose and a wide mouth. The latter is flanked by slender LED lighting units and the car’s sleek styling allows for a drag coefficient of 0.29. 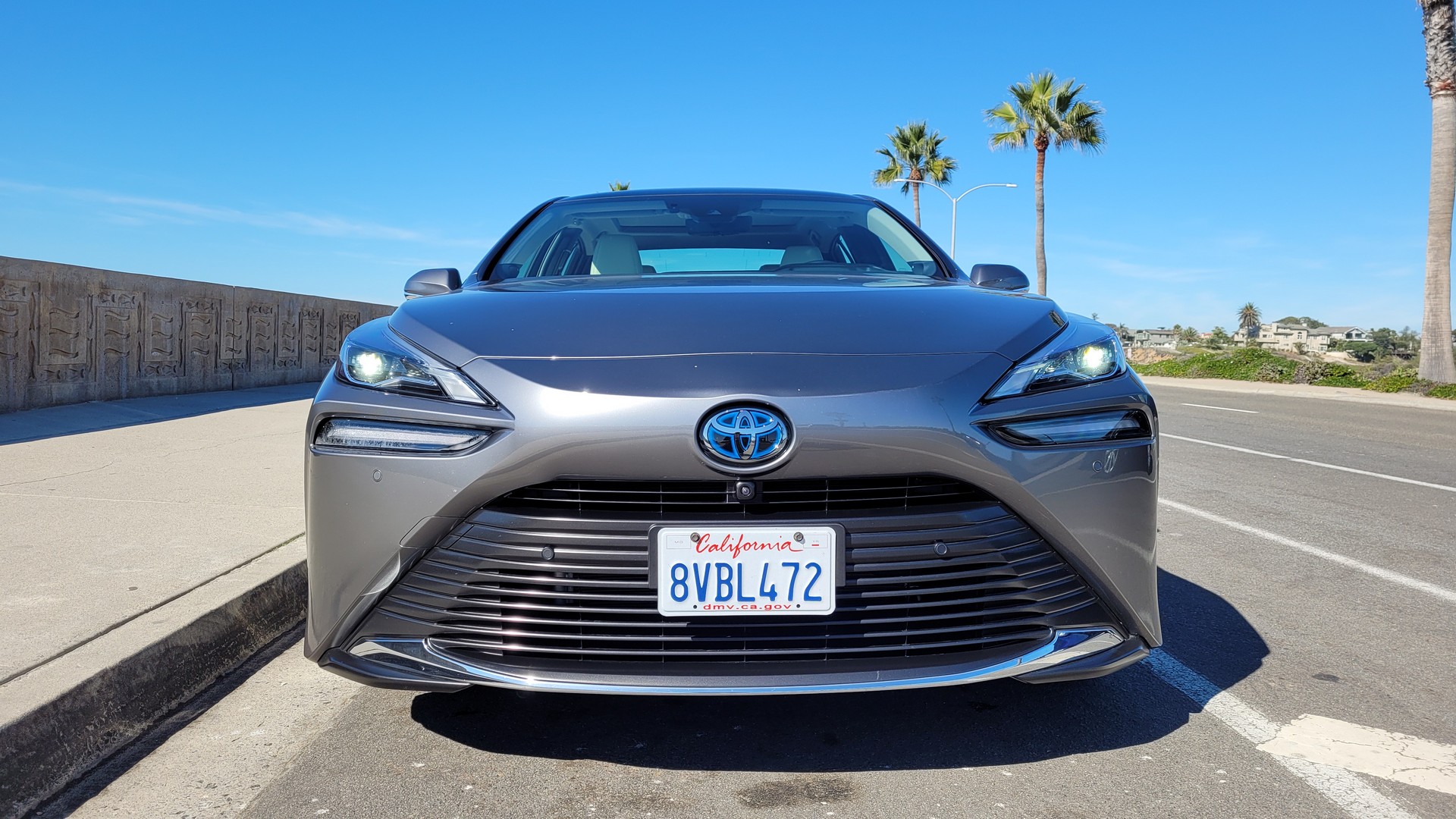 Moving further back, there’s a long hood and a rakish windscreen that flows into a sloping roof. The model also rides on aerodynamically optimized 19-inch alloy wheels, but 20-inchers are available on the range-topping Limited. Other highlights include full-width brake lights and a stylish trunk with an integrated spoiler.

A Relatively Classy And Comfortable Cabin 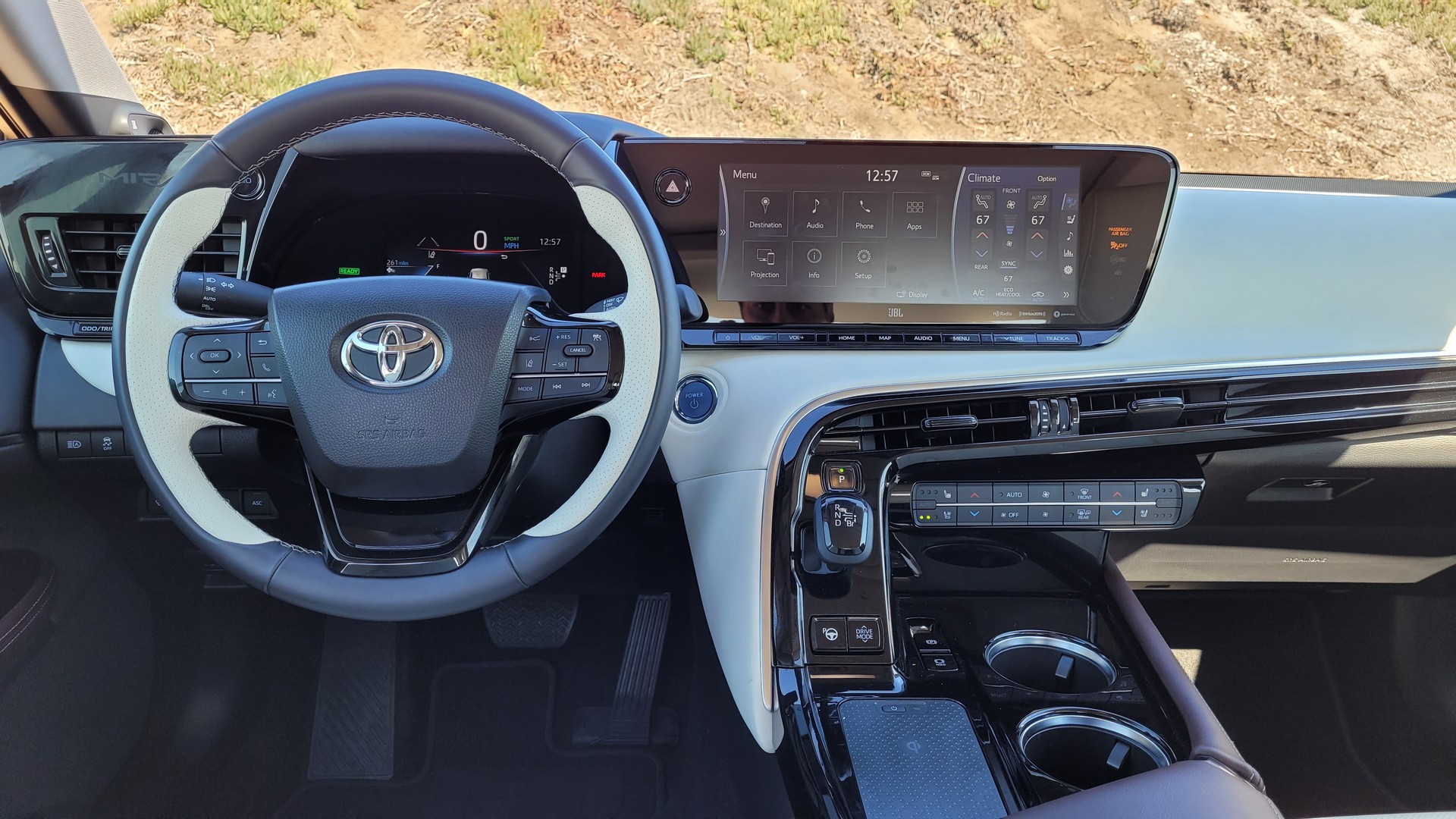 Given the Mirai starts at $49,500, it comes as little surprise the sedan is nicely equipped as even the entry-level XLE features power SofTex front seats with heating. They’re joined by a relatively basic 8-inch digital instrument cluster and a 12.3-inch infotainment system with GPS navigation as well as Android Auto, Apple CarPlay, and Amazon Alexa. Despite the Mirai’s flagship status, the car hasn’t been upgraded to the all-new Audio Multimedia system that recently debuted in the Tundra. As a result, the infotainment system is a little slow and dated.

Putting that aside, the Mirai comes equipped with a passive entry system, a dual-zone automatic climate control system, and a 14 speaker JBL audio system with a subwoofer. Other highlights include a power tilt/telescoping steering wheel, an auto-dimming rearview mirror, and a wireless smartphone charger. Sadly, the latter is a bit infuriating as its slippery surface causes your phone to slide around while driving. 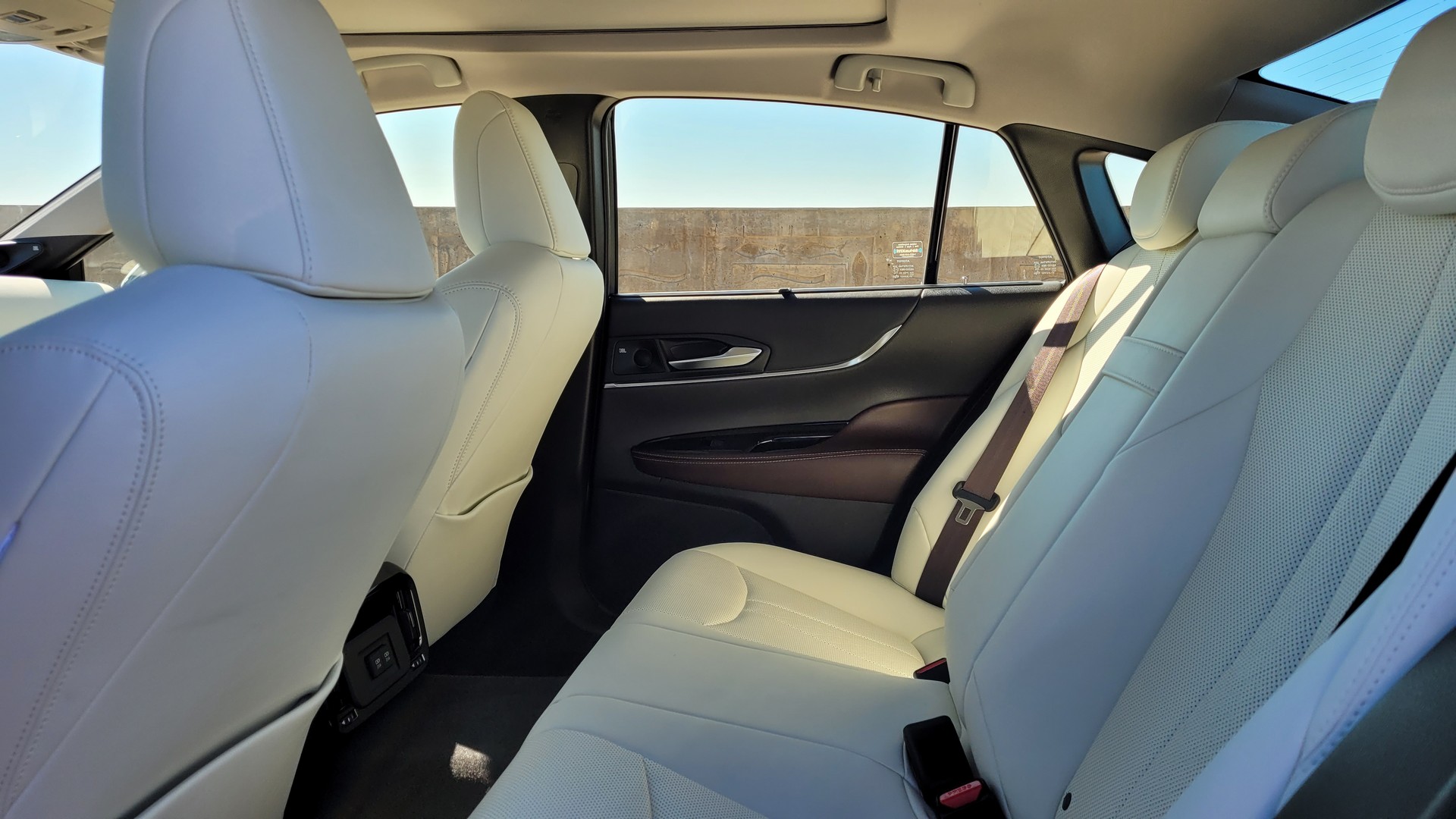 While the entry-level model is impressive, the $66,000 Mirai Limited features perforated SofTex upholstery that is available in a stylish two-tone design. Buyers will also find an eight color ambient lighting system, a digital rearview mirror, and heated/ventilated seats in both rows.

The rear seat accommodations don’t end there as the Limited has a tri-zone climate control system, which can be adjusted using a touch panel on the rear armrest. The panel also allows passengers to control the audio system as well as the sunshade for the panoramic glass roof.

Needless to say, the interior feels worthy of a Toyota flagship and the aforementioned features are joined by padded surfaces and metallic accents. However, the cabin falls short of being truly luxurious as there are a handful of cheap looking components and too much gloss black plastic.

Those aren’t the only issues as the interior is surprisingly cramped. While there’s plenty of space up front, entry and egress from the rear seat is tricky and legroom isn’t as generous as you’d expect. The numbers tell the story as the rear seat offers a mere 33.1 inches (841 mm) of legroom and that’s less than you’ll find in the Camry, Corolla, and Prius. Making matters worse is the sizable rear tunnel, which means anyone unfortunate enough to sit in the middle seat will have to share footwells with their fellow passengers.

A Betamax Powertrain In A VHS World 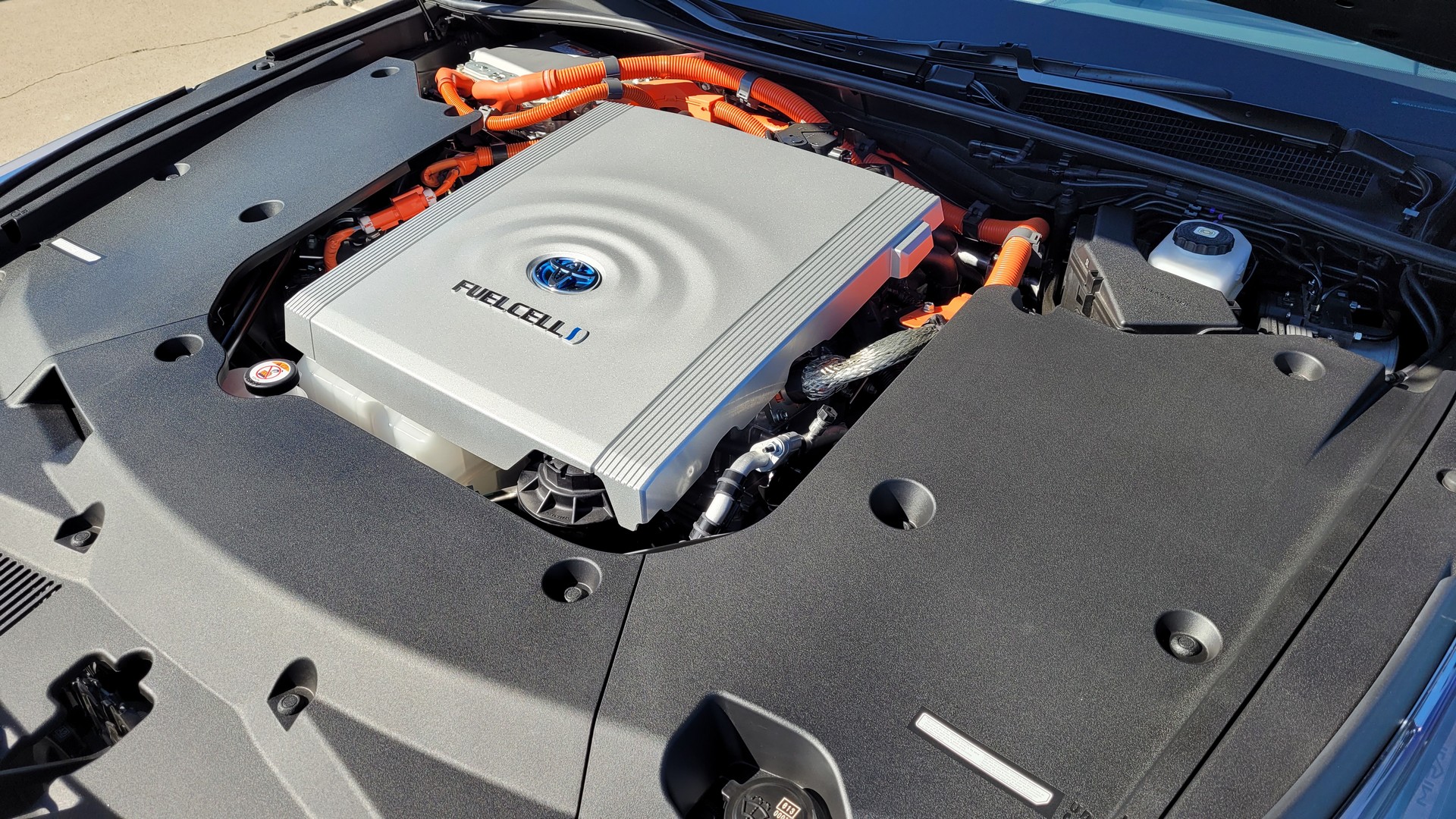 While the end of the internal combustion era is now within sight, the auto industry has been planning for this possibility for decades. However, many companies assumed fuel cells would win out over battery electric vehicles.

It’s not hard to understand why as FCVs offer a number of benefits over BEVs. Besides having a quick refueling process similar to models equipped with internal combustion engines, FCVs don’t have to haul around heavy and expensive battery packs.

However, advances in battery technology have solved many of the issues that plagued early electric vehicles. Battery prices have fallen significantly in the past decade, while charging times and ranges have also improved. 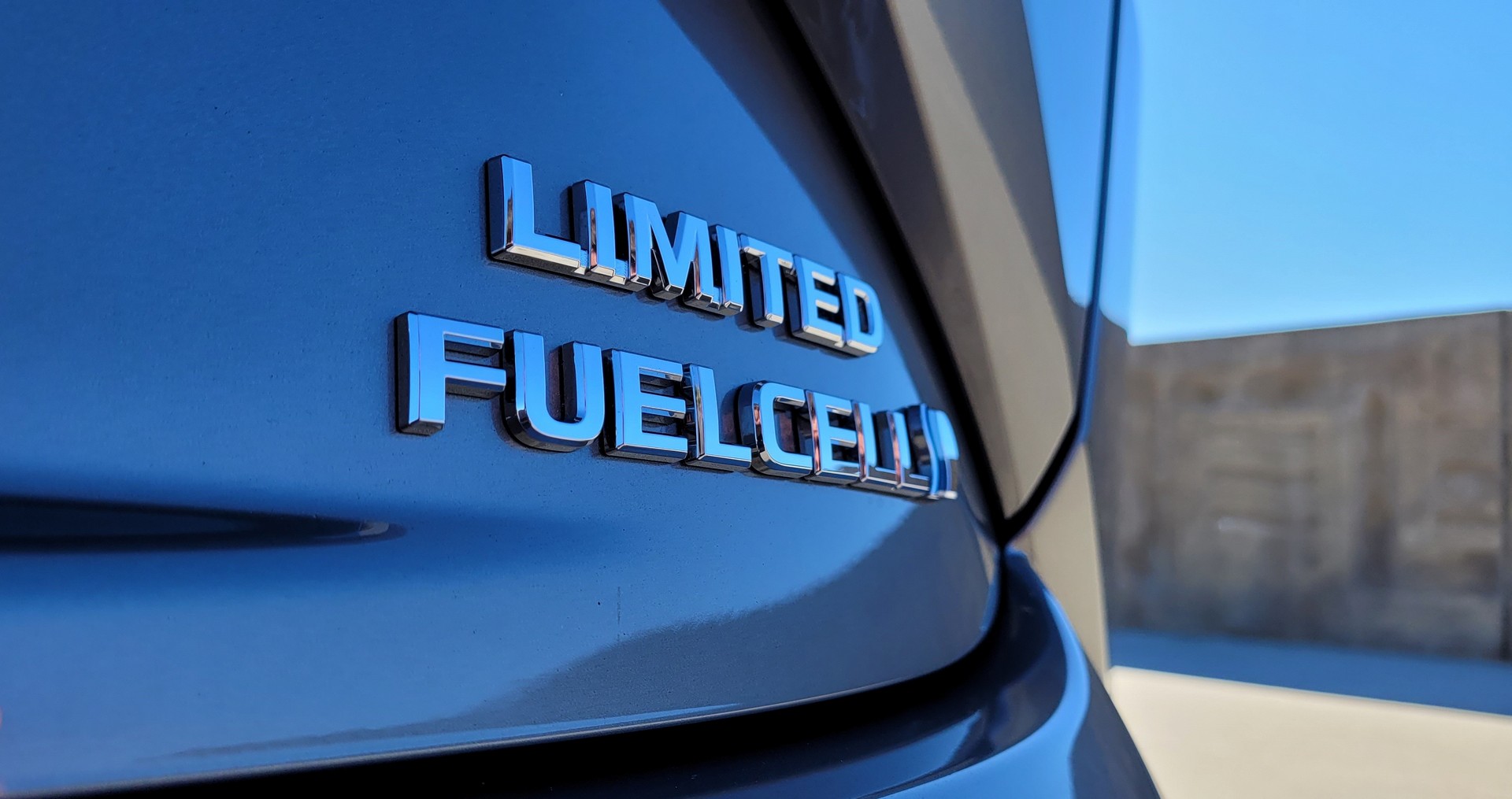 The two competing ideas recall the battle between Betamax and VHS. Betamax offered superior sound and picture quality, while VHS was cheaper and more widely supported by manufactures. In the end, VHS won out and it appears electric vehicles will do the same.

However, that’s not to knock the Mirai’s powertrain as it’s an impressive engineering achievement. The model features three carbon-fiber reinforced hydrogen storage tanks, which feed a fuel cell that causes a chemical reaction when hydrogen is combined with oxygen from the air. This reaction creates electricity with water being the only emission.

The electricity is sent to a 1.24 kWh lithium-ion battery, which powers a rear-mounted electric motor that develops 182 hp (134 kW / 185 PS) and 221 lb-ft (300 Nm) of torque. While the battery is tiny compared to those used in traditional electric vehicles, it’s not an issue as the fuel cell can always create more power if needed. 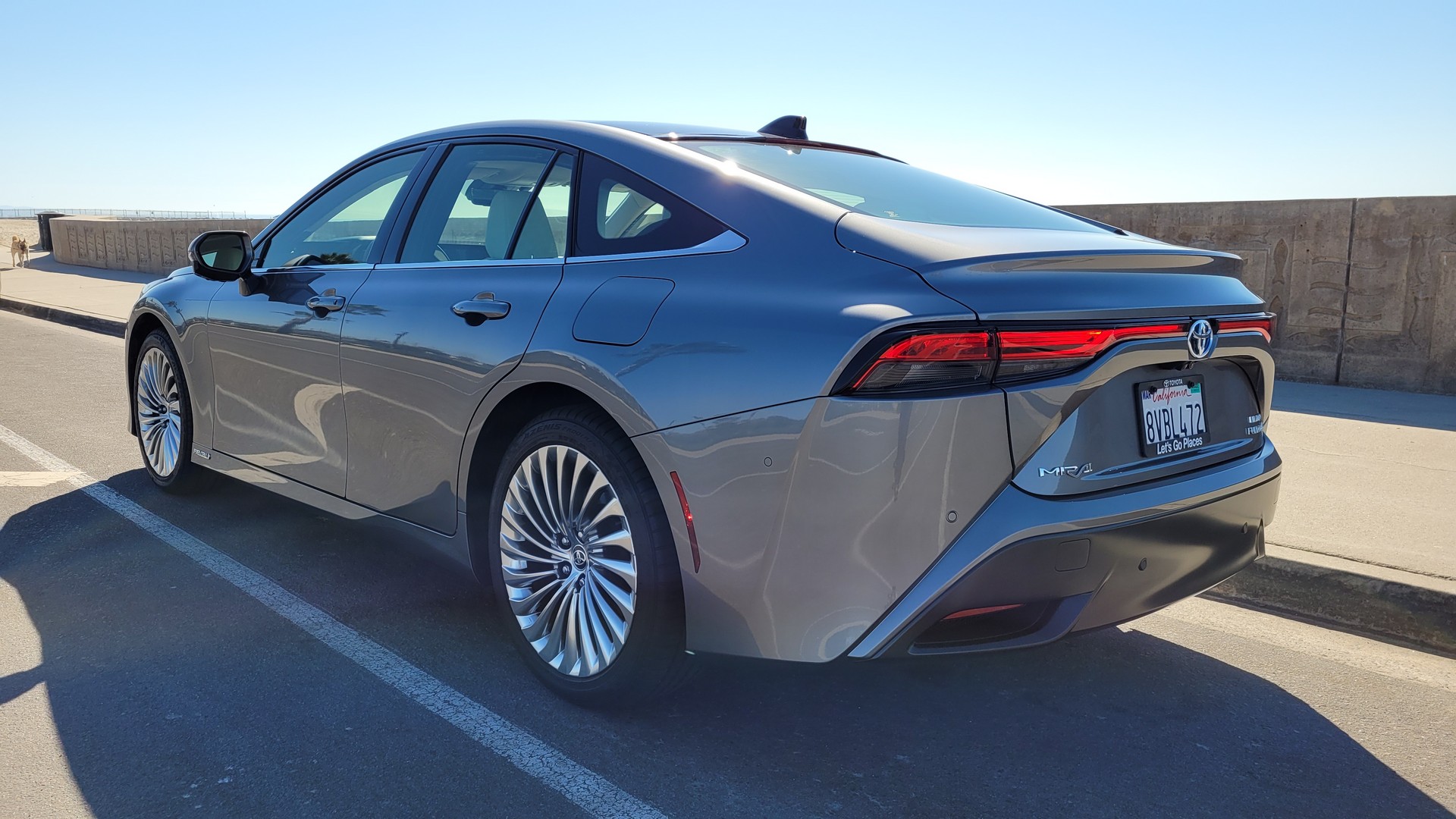 Fuel cells are obviously more complicated than that, but the important thing is that the Mirai’s powertrain works flawlessly and doesn’t make itself known. However, it’s not exactly silent as you can hear the car’s electric air compressor when outside.

Putting the high-tech wizardry aside, the driving experience is typical of a luxury sedan. However, there’s a big caveat and that’s the lackluster electric motor. While the Mirai is lighter than many electric vehicles as it weighs 4,255 – 4,335 lbs (1,930 – 1,966 kg), all that mass is being moved by a single 182 hp (134 kW / 185 PS) motor. That’s a tall order and the vehicle’s performance takes a major hit. 60 mph (96 km/h) comes in a leisurely 9.2 seconds, which is 3.3 seconds longer than the similarly sized and slightly more expensive BMW 530i. 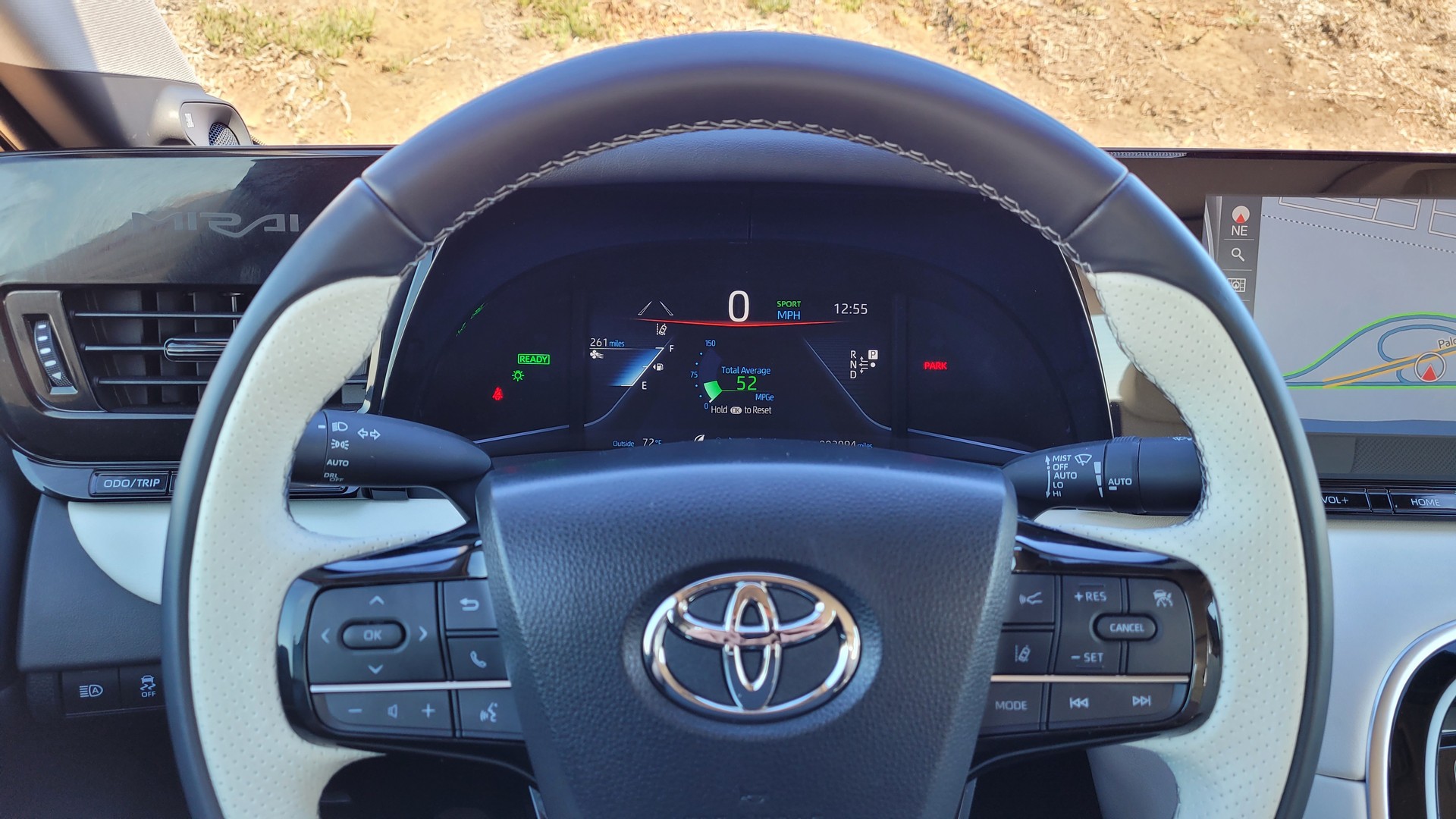 The Mirai rides on the GA-L platform, which is shared with the Lexus LS and Japanese Toyota Crown. It’s a wonderful architecture that feels solid and is unsurprisingly geared towards comfort. The multilink suspension easily soaks up minor road imperfections and allows for a ride quality that feels nothing short of luxurious. However, it never comes across as overly soft despite the focus on comfort.

The good news doesn’t end there as the electric power steering system is responsive and nicely weighted. That’s a pleasant surprise and the steering can be adjusted by switching between Eco, Normal and Sport modes.

Another plus is the Mirai’s handling as the car is more nimble than it looks. While we didn’t get to test the model to extremes, it feels capable in corners and is fairly maneuverable at low speeds. The sedan also sports Active Cornering Assist, which uses the stability control system to help reduce understeer in certain situations.

A Chicken And Egg Problem

While the Mirai is undeniably interesting, it’s usefulness is limited by a lack of hydrogen refueling stations.

The U.S. Department of Energy’s map of hydrogen refueling stations reveals the gravity of the situation as it’s blank other than the state of California. Given that, it’s no surprise Mirai sales are limited to the Golden State.

During a presentation in November, Toyota noted 47 hydrogen refueling stations are already open and another 120 are under development. That’s progress, but it’s a drop in the bucket when you consider there are more than 150,000 gas stations in the United States. 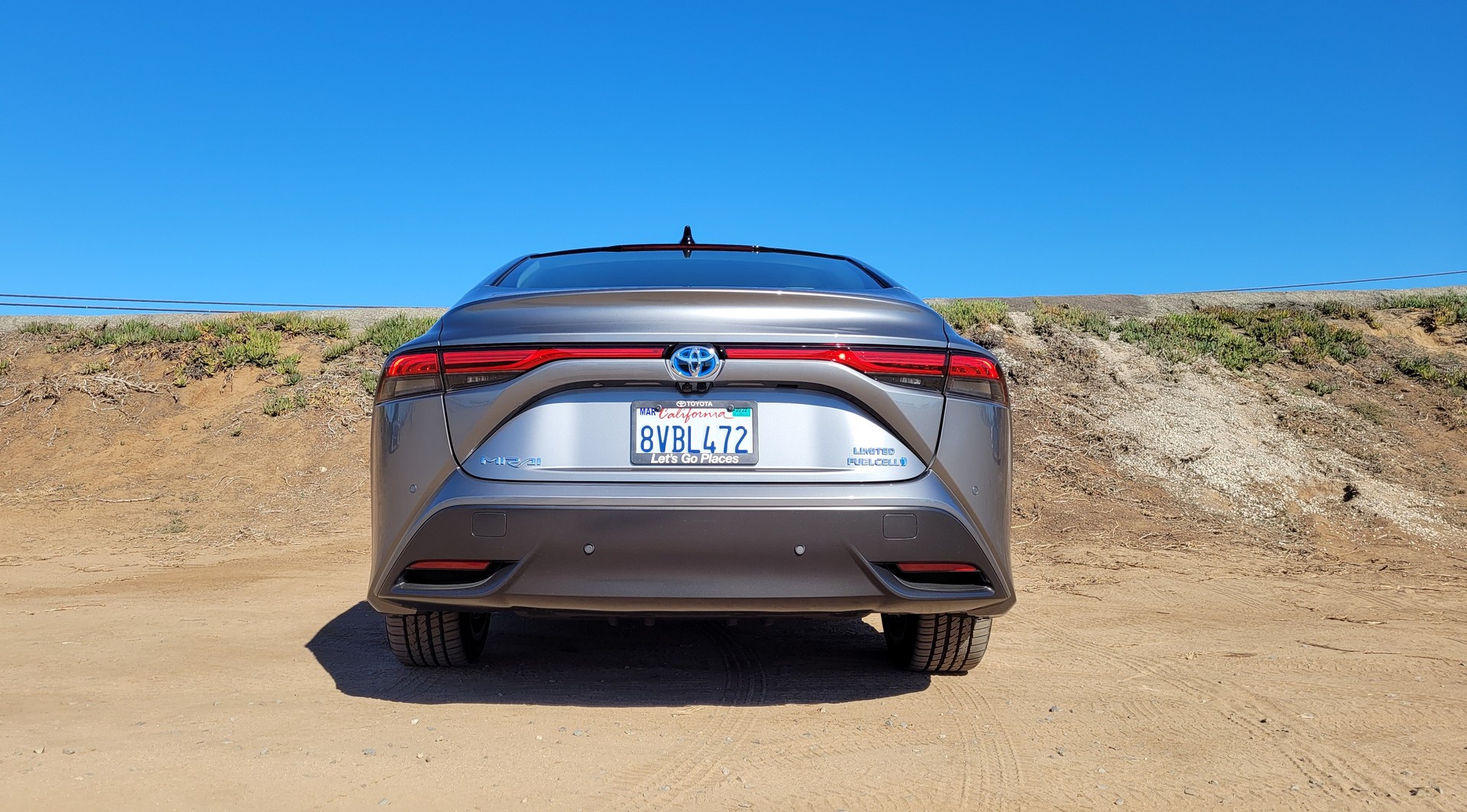 While the lack of hydrogen refueling stations remains a serious issue, Mirai owners don’t have to worry about paying for fuel as anyone who purchases or leases the sedan will get up to $15,000 worth of hydrogen for free.

The Mirai Isn’t Just A Car, It’s A Glimpse At What Is Possible 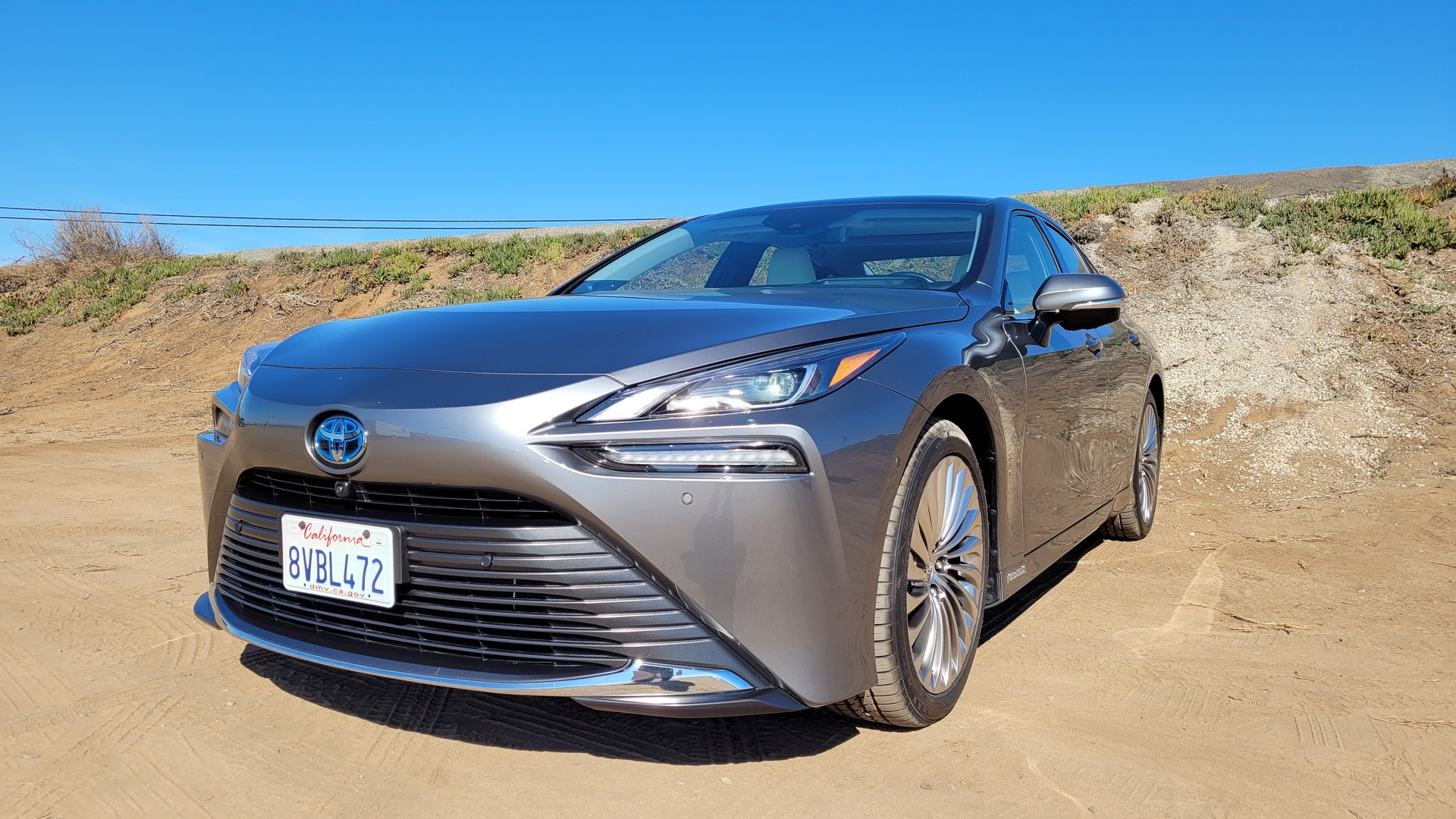 As a car, the Mirai is hit or miss. It looks good, features a fairly upscale interior, and has a comfortable ride quality. However, the back seats are small, power is only adequate, and pricing starts at $49,500 before factoring in incentives and a $1,025 destination charge.

Of course, the Mirai isn’t your typical sedan as it’s more like a drivable vision of the future. Despite that, it never feels like a half-baked prototype as it is a legitimate luxury car that shows the potential of fuel cells. Unfortunately, it also helps to highlight their drawbacks as, just like America’s hydrogen refueling infrastructure, it is limited to California.

Hopefully this will change in the future, but the automotive industry has clearly embraced battery electric vehicles. That being said, a handful of companies are still committed to hydrogen and that should be a relief for anyone who doesn’t want to wait around for batteries to charge.