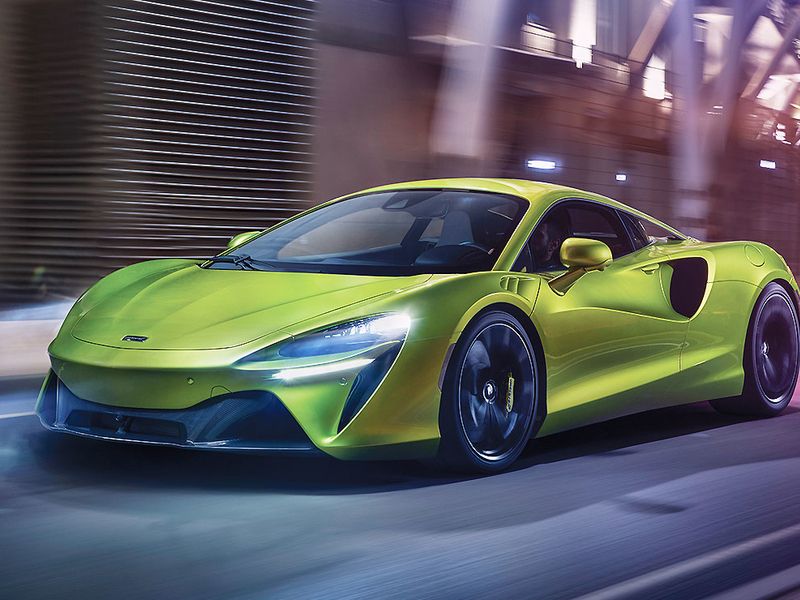 Chip shortages have delayed the launch of a key new McLaren model — again.

Deliveries of the Artura have gotten pushed to early July, the third delay of McLaren’s plug-in hybrid supercar.

The original October 2020 market launch was delayed to June 2021 because of operating challenges caused by the pandemic. Supplier-related issues then pushed U.S. deliveries to early fall.

The Artura introduces McLaren’s Carbon Lightweight Architecture platform and combines a twin-turbocharged 3.0-liter V-6 engine — the first in a McLaren — with an electric motor and a 7.4-kilowatt-hour battery.

“We held on longer than everybody else in terms of stopping production, but unfortunately, our semiconductor supply dried up,” Ormisher said. “That made us have to reduce production across the board.”

McLaren is far from alone in its predicament. Supply-chain shortages have gummed up assembly lines and complicated product launch schedules across the auto industry for much of the year.

Production forecasters at AutoForecast Solutions expect microchip shortages to extend into the second quarter of 2022, and estimates up to 11.3 million vehicles will get cut from manufacturer schedules worldwide before bottlenecks are resolved.

Chip prices have increased ten-fold this year, McLaren recently told dealers. The automaker is prioritizing its limited chip supply toward production of higher-margin models, such as the Elva and 765LT Spider, a source said.

But Robert DiStanislao, president of RDS Automotive, which operates two McLaren stores near Philadelphia and in Newport Beach, Calif., said McLaren was “not as proactive” as some other manufacturers in securing semiconductor supplies at the beginning of the chip crisis.

“They didn’t know the shortage would grow into such a looming crisis,” DiStanislao said. “They thought it would be remedied faster.”

Ormisher is optimistic that the chip scarcity will ease in the new year. He said there is a new ability to source semiconductors now.

“It is starting to come back a little bit,” he said.

The Artura signals a new direction for the British sports car maker as throaty combustion engines are increasingly viewed by environmentally conscious governments as anachronisms.

McLaren seeks to transition to a 100 percent electrified portfolio by 2026, with the first EV model expected by the end of the decade.

The Artura is a priority for McLaren — 40 percent of the company’s 2022 production is reserved for the new model, dealers have been told.

It starts at $229,500 including shipping, and is a conquest vehicle for McLaren.

The Artura “gets to the meaty part of the supercar market,” DiStanislao said. “It helps with volumes. The buzz is created in that price point.”

It is a “showcase for McLaren’s engineering capabilities to a wider audience,” AutoForecast Vice President Sam Fiorani said.

“From its all-new architecture to its hybrid drivetrain and its distinctive V-6 engine, the Artura opens the doors to McLaren technology and design abilities,” Fiorani said.