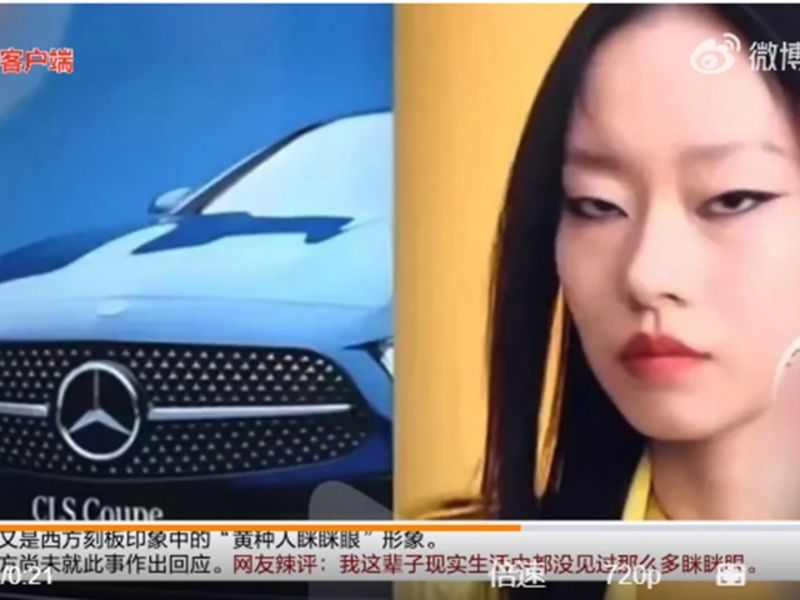 Mercedes-Benz removed a video advertisement from a Chinese social media website, state media said, after the clip got swept up in a charged national debate over depictions of Asian-looking features by foreign companies.

The video was posted on Mercedes-Benz’s official Weibo account on Saturday and later removed due to public backlash, the Communist Party’s Global Times newspaper said. “The makeup of the female model looked like slanted eyes and once again aroused a heated discussion from netizens with many blaming that the makeup reflects Western stereotypes about Asian people,” the paper said Tuesday.

The report included a screenshot of the video showing a woman who is apparently Chinese, though Bloomberg News hasn’t seen the full version of the ad. Emails and phone calls to Martin Sauber and Juan Zhou, the China press representatives for Daimler, were not immediately returned.

The episode makes Mercedes-Benz the latest target of consumer nationalism in China that has in the past dealt a blow to Dolce & Gabbana, Hennes & Mauritz and others. Last week, Chinese social-media platforms erupted over allegations that Walmart Inc. had stopped selling items from Xinjiang at its Sam’s Club grocery stores in the Asian nation. Christian Dior stopped using a photo of a model in November that state media said was “smearing Asian women.”

The model hit back on the Twitter-like Weibo service, saying: “With small eyes, am I not Chinese? I totally agree with patriotism. However, creating big problems out of normal matters has become a morbid obsession.”

Daimler said last week it would slash its stake in the Denza electric-car joint venture with China’s BYD Auto Industry Co. following years of weak sales. BYD will own 90 percent of the business and Daimler 10 percent after an equity transfer the companies plan to complete in mid-2022, the Mercedes-Benz maker said.

The joint venture was started in March 2012. Its weak profitability has been a concern at Daimler for years, even as sales for its Mercedes luxury vehicles continued to surge in China.