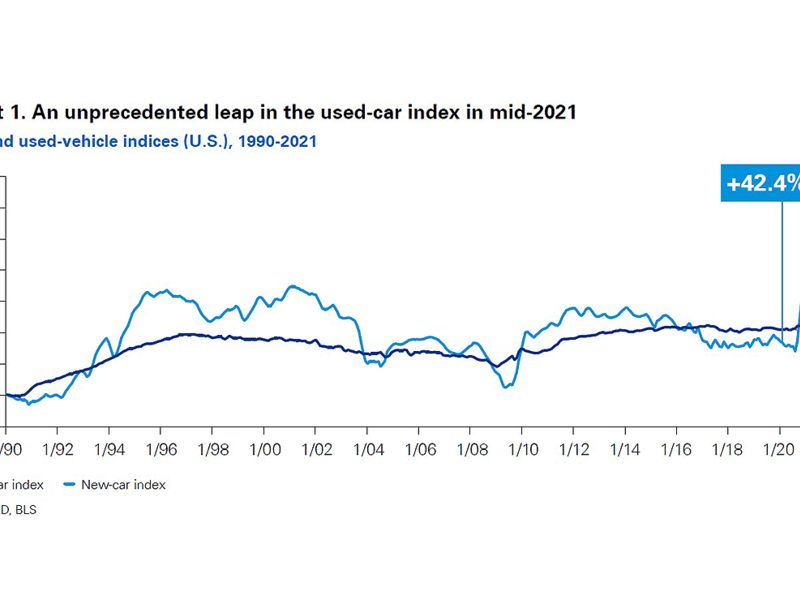 The used-car market has historically been closely correlated with the new car market, KPMG global head of automotive Gary Silbert told Automotive News on Monday. But used-vehicle prices are up 42.4 percent over January 2020 levels, while new-vehicle prices are have only risen 11.6 percent, KPMG said in a white paper released Tuesday.

“Whatever path the new-car market takes to a ‘new normal,’ used-car prices will eventually return to the traditional relationship with new-vehicle prices,” KPMG wrote in the white paper. “In other words, a 20 to 30 percent plunge in used-vehicle prices is in the cards.”

KPMG estimated vehicle supply and demand would achieve equilibrium sometime between October 2022 and 2023, but used-vehicle prices would begin to fall before that point.

“In every scenario, we expect the market to anticipate the turnaround in the new-car supply situation ahead of time and begin repricing used cars before new-car lots are full and used-car demand returns to normal,” KPMG wrote.

Too sharp a decline could leave lenders and others “stuck with overvalued assets,” according to KPMG.

Other industry experts anticipate vehicle prices will decline at a more manageable rate.

Cox expects the Manheim used-vehicle index to peak for a final time between January and April 2022, when customers spending tax refunds would cause a final price spike above the 2021 ceiling seen in November.

Normal depreciation would return after this point, taking used vehicles back down to December 2021 levels in December 2022, Smoke said.

However, December 2021 still represents an elevation over the norm, and Smoke said Cox expects that the wholesale market wouldn’t reach pre-pandemic volume until at least 2025. This would require 17 million new-vehicle sales in 2022, he said.

A second forecast offers the “humility” of entertaining that KPMG’s price-drop hypothesis was incorrect, Silberg said. In this future, the “inflationary fire” burns longer, he said. “This thing could drag out,” Silberg said.

Finally, there’s the potential that the Federal Reserve’s response to inflation hits too hard and produces an “ugly story” of stifled consumer demand, he said.

Automakers should develop contingency plans for all three of these potential futures, according to Silberg.