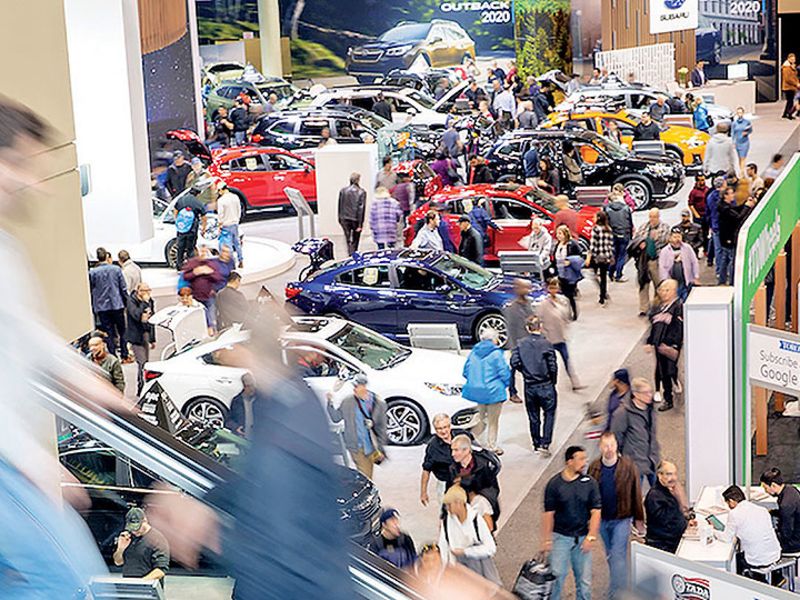 A red flag went up last week as the 2022 season of auto industry trade shows prepares to take stage.

Three auto shows in Canada were called off as the rapidly spreading omicron variant spawns a COVID-19 resurgence in Canada and elsewhere.

Those decisions came down as auto companies prepare to send executives to CES in Las Vegas in early January for that show’s return as a live event.

CES normally attracts attendees from around the world to conduct business and see new electronic technologies. In January 2020, just as the world was plunging into the pandemic, the show brought together more than 170,000 attendees, crowding Las Vegas exposition halls, hotels and airport terminals.

The Canadian cancellations also provide a counterpoint to news last week that the state of Michigan will provide a $9 million grant to help the Detroit auto show get back in business. Detroit hasn’t hosted an auto show since January 2019.

The Detroit Auto Dealers Association canceled the scheduled June 2020 show, and then the September 2021 show because of coronavirus pandemic worries.

In a statement to Crain’s Detroit Business, a sibling publication of Automotive News, DADA Executive Director Rod Alberts said, “We are pleased state leaders have recognized the hardships and difficulties the show has faced over the past couple of years — hardships directly related to COVID.”

“While each previous show has funded the next show — a nearly three-year void led us to ask for direct support from the state of Michigan,” Alberts said. “This one-time funding will help put the show back on strong financial footing and go toward making a 2022 show the best one yet — showcasing all things Michigan has to offer on the automotive front.”

The auto show hiatus also has hampered the financial stability of Detroit’s convention center. In September 2020, the legislature appropriated $36 million in additional state aid over six years for the Detroit Regional Convention Facility Authority to make up for losses sustained during the pandemic when the convention and events business ground to a halt.

“We were really confident that the event would be held this year. Omicron came along and muddied the waters. But it is our corporate responsibility,” Pereira said in a statement.

The Toronto show would have followed a month later. But Jason Campbell, the event’s general manager, said “the health and wellbeing of our community needs to be our first priority.”

Due to fast-rising COVID case counts through the first half of December, the Ontario government reinstituted restrictions on indoor venues last week. Any indoor venue accommodating more than 1,000 people has been limited to 50 percent capacity starting Friday, Dec. 18.

Toronto organizers said the show plans to return in 2023 for what, barring the pandemic, would’ve been its 50th year.

“What has been clear over the past few months in our discussions with our consumers and our manufacturer partners is how much they all value our in-person live auto show event experience, and how hungry they all were for it to return,” Campbell said in a statement.

Ticket sales for the Toronto show had not begun. They had started in Montreal, with the move-in date less than a month away. Refunds will be issued to all purchasers.

“For the past several months we have been working diligently with our partners and major auto manufacturers to plan a return of Western Canada’s best attended consumer exhibition event,” association President Blair Qualey said in a statement.

Despite eagerness for the show’s return after being scrapped this year, he said, “our top priority continues to be the safety of the public, our dealer members and their staff.”

Qualey said his group hopes to announce details soon about the 2023 show, as well as “new initiatives to connect consumers with the new-car industry in 2022.”