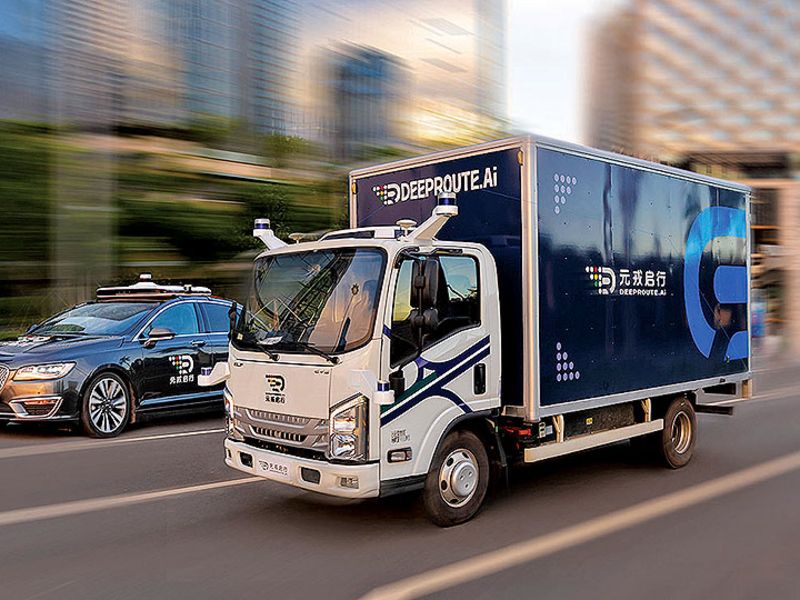 DeepRoute.ai — an autonomous technology startup based in China — is mapping out a strategy in the U.S. market centered on deploying self-driving medium-duty trucks to make commercial deliveries at night.

The plan, explains founder and CEO Maxwell Zhou, seeks to address two primary issues in the commercial delivery sector: the logistical efficiency of deliveries in urban areas and the growing labor shortage in cities amid an aging work force.

“I mean, even in China there are less and less young people that … want to drive trucks,” Zhou told Automotive News, noting that the average age for commercial truck drivers in the U.S. is 46.

Zhou, who founded the company in 2019, also envisions DeepRoute.ai’s self-driving, medium-duty trucks helping to solve the supply chain issues brought on by COVID-19 and the challenges the transportation sector faces to find and retain delivery drivers.

DeepRoute.ai — which is testing its autonomous trucks in Shenzhen, China — was driven to create its nighttime commercial deployment model because of the transportation challenges in that country, where most urban deliveries tend to take place at night when traffic is less congested.

“In China … the trucks there [are] not allowed … to drive in the daytime because it’s already too [much] traffic,” said Zhou. He added, “In China, there are just too many people.”

Zhou believes nighttime deployment of its self-driving trucks is a more viable strategy in the U.S. as well, because of lighter traffic. But he is quick to note that the vehicles are fully capable and safe to operate during the day.

Zhou sees DeepRoute.ai’s autonomous technology as a great way to combat the fatigue and distracted driving among delivery drivers, which often leads to accidents on the road.

The CEO also contends that the company’s strategy aligns well with the regulatory and urban infrastructure plans being put in place in the U.S. to support commercial usage of autonomous vehicles.

Still, Zhou believes in a more localized, targeted approach to the U.S. market, as opposed to a business strategy centered on the mass deployment of autonomous trucks.

“That’s just … not ready yet, but if we just do some special routes and special times, especially for the medium-duty truck … normally they just drive the same way, day by day, same times, and this can limit your risk,” he said.

DeepRoute.ai expects its self-driving commercial trucks to be fully operational in Shenzhen by early in the first quarter of 2022. The company’s target commercial client base in the U.S. consists of convenience stores and supermarkets through strategic partnerships, said Zhou, with California being the company’s first target market.

“We cannot just do a service for only one scenario,” he explained. “That’s why we collaborate with our partners, our local partners, so we do this business together.”

The tech startup — which in September secured $300 million in series B funding led by the capital firm Alibaba Group — also produces self-driving robotaxis, which are deployed in Hangzhou, Wuhan and Shenzhen in China. DeepRoute.ai also is testing its robotaxis in Fremont, Calif., home to its U.S. headquarters..

The company this month announced that it will offer its full-stack Level 4 self-driving system to automakers, Tier 1 suppliers and mobility companies to mass-produce AVs.

However, Zhou said that DeepRoute.ai’s medium-duty autonomous trucks offer the company the most immediate business opportunities in the U.S., especially given Alibaba Group’s ties to the e-commerce, community retail and logistics services sectors.