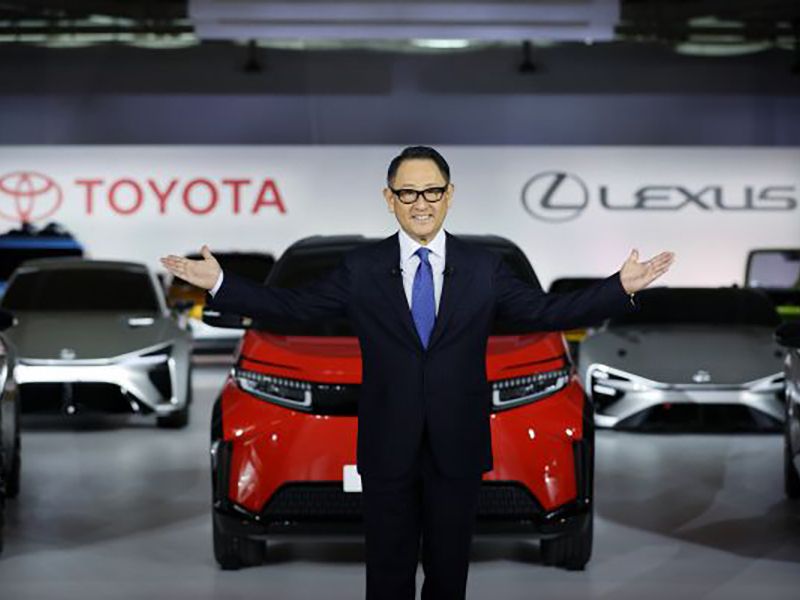 Lexus may be behind other luxury brands when it comes to getting full-electric vehicles into its U.S. showrooms, but when the first of at least four new EVs arrives late next year, the brand will rely heavily on its dealer network to catch up with — and perhaps overtake — its competitors.

Lexus has been cast in a starring role in the $70 billion investment Toyota Motor Corp. will make globally in electrification, including half for battery-electric vehicles. CEO Akio Toyoda laid out the automaker’s ambitious plans in a presentation in Tokyo this week that featured him speaking in front of 16 future battery-electrics. Those vehicles, which Toyoda said were planned for production and were among 30 EVs planned for global markets by 2030, included a midsize pickup, an off-roader heavily resembling the former Toyota FJ Cruiser and four Lexus vehicles.

But for Lexus to succeed in the U.S. — the brand’s biggest global market — it will need the help of supporting players: its lineup of gasoline-electric and plug-in hybrids.

The luxury brand plans to use the courtesy fleets maintained by its dealers for their service customers to also serve as loaner vehicles for those who buy or lease its upcoming EVs and need to travel beyond where charging infrastructure is built out, explained Andrew Gilleland, head of Lexus at Toyota Motor North America.

“Internally, we’re talking about how we can leverage our dealers in terms of giving a better experience for battery-electric customers,” Gilleland told Automotive News. “We’re going to probably use [Lexus customer convenience cars] so that if you’re a Lexus BEV consumer and you want to go see Grandma in Colorado, right now, the infrastructure for that trip is a bit problematic.”

Gilleland said the brand will offer a subscription service, baked into the cost of its EVs, that would entitle consumers to borrow gasoline-electric hybrids or plug-in hybrids from Lexus dealers for as many as 30 days to ease concerns over whether an EV can fully replace their current gasoline-powered vehicle. Full details of the subscription program will be announced closer to the U.S. launch of the Lexus RZ 450e, a spokesman said, including whether the 30 days is per year of ownership or over a longer period.

With the subscription program, “you’re still getting some of the benefit of the BEV, but you also get the range now,” Gilleland said. “I think the concerns with consumers right now is both charging and ranges — it’s not the product itself. I think we’ve proven in this industry that the products are reliable, they’re fun to drive and they’re exciting. It’s just the range issues.”

Lexus is not the first automaker to allow EV customers to temporarily swap for gasoline-powered vehicles for long-range trips. Fiat tried the strategy in 2013 with its money-losing Fiat 500e using rental cars from Enterprise Holdings.

The U.S. Lexus boss said he thinks the brand “is well positioned to take advantage of the market, even though today [EVs are] 15 percent of the of the total luxury industry. But that’s 15 compared to 2.5 or 3 percent of the total industry, so we know that luxury car buyers are going to at least initially be the majority of purchasers of these electric vehicles.”

Gilleland said Lexus is working with an outside contractor to visit the brand’s 243 U.S. dealerships to determine what each will need in their individual markets to be able to sell EVs successfully.

“We’re looking at registrations, sales volumes, what we predict might happen, and say, ‘These are the number of chargers you’re going to need. This is the infrastructure,’ ” Gilleland said. “We have the world’s best dealer body — I believe that in my heart of hearts — and I think we need to figure out how to leverage it. We do have some ideas.”

John Iacono, co-president of BRAM Auto Group in New York and chairman of the Lexus National Dealer Advisory Council, said he and other members were enthusiastic and excited to see the EVs that will eventually come to their dealerships and the plans the brand has for its retailers.

“Everyone’s saying they’re ready to go,” Iacono said after dealer council meetings this week. He said that using dealers’ courtesy vehicle fleets for EV customers is “the piece that probably excites me more than anything else.”

“The one thing that we have over the dominant player in the EV space is a dealer body that can really take care of its customers,” he said, referring to Tesla. “If you look at the reaction of the owners of those vehicles — not the buyers who are all excited about their new purchase, but the owners who have had them for a while — you see people whose interactions with that company are not so great. Now we have an opportunity, as a dealer body that knows how to take care of people, to go in and provide the level of service that we know how to provide, that we provide to our customers every day.”

Iacono said that in the future, consumers buying their first EV could be able to work through their Lexus dealership to set up a home charging system as part of the brand’s concierge-level of customer service. “We know how to do it. The finances are going to pencil,” he said.

In terms of future product, there were four EVs wearing a Lexus badge arrayed behind Toyoda this week during his presentation, including the RZ 450e, a five-seat crossover that will be built in Japan and is expected to begin arriving in U.S. showrooms in late 2022 or early 2023, depending on production issues.

The other three Lexus-badged vehicles shown were:

Koji Sato, president of Lexus International Co., promised during the presentation that the brand would “extract the full potential of the vehicle” with its coming EVs. Sato said the RZ would come with a “cruising range over 700 km” (435 miles), while its “acceleration time will be in the low-two-second range.” He also promised that the vehicles would adopt the brand’s signature driving experience — meaning customers should be able tell they are driving a Lexus, regardless of the nameplate — which it’s tried to develop with recent models.

Unlike Toyota Motor’s large German global competitor, Volkswagen Group and its Audi premium brand, Toyota and Lexus won’t go exclusively EV across their global lineups until consumers or governments demand they do so. The Japanese automaker remains committed to a goal of being globally carbon neutral by 2050, but it also doubled down on the role it believes its hybrid technology could play to get to that point.

“I believe that achieving carbon neutrality means realizing a world in which all people living on this planet continue to live happily,” Toyoda said during the presentation. “We want to help realize such a world. This has been and will continue to be Toyota’s wish and our mission as a global company. For that challenge, we need to reduce CO2 emissions as much as possible, as soon as possible. We are living in a diversified world and in an era in which it is hard to predict the future. Therefore, it is difficult to make everyone happy with a one-size-fits-all option.”