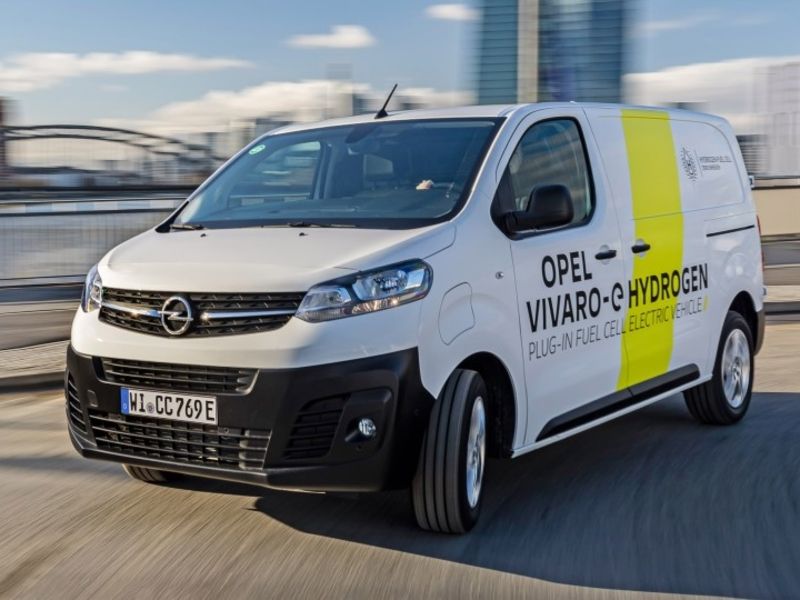 The era of hydrogen-powered vans has begun at Stellantis, which is starting limited production of medium commercial vans from Peugeot, Citroen, Opel.

Peugeot will deliver its first e-Expert Hydrogen van to Watea, a subsidiary of the Michelin group, the brand said Wednesday. Citroen will provide e-Jumpy Hydrogen vans to energy provider Suez, and Opel’s first Vivaro-e Hydrogen models will be in the hands of appliance maker Miele.

The vans are based on full-electric versions, and use a “mid power” hybrid powertrain that can deliver 400 km (250 miles) of zero-emission range on the WLTP cycle without having to spend hours recharging batteries, the brands said.

At the heart of the powertrain is a 10.5 kilowatt-hour battery, which can be recharged conventionally with a plug, offering 50 km of range. This range is included in the 400k m total figure.

But its primary source of charge is a 45-kilowatt fuel cell with a 4.4-kg tank that can be refueled in three minutes.

The vans will be assembled at Stellantis’ Sevel Nord plant in France, then converted to hydrogen power at the group’s center for hydrogen expertise in Ruesselsheim, Germany.

The brands have not revealed prices for the hydrogen versions of the vans.

Stellantis, however, is not the only automaker launching hydrogen vans on the European market. Renault has offered hydrogen versions of the small Kangoo and large Master vans, and plans a hydrogen version of its midsize Trafic as part of its Hyvia joint venture with Plug Power.

Hydrogen power has been promoted as a zero-emissions alternative to battery-electric vehicles, but a lack of fueling infrastructure, the cost of the powertrain and concerns about hydrogen extraction have largely sidelined the technology so far.

In presenting the three vans earlier this year, Stellantis said Germany has about 90 hydrogen refueling stations and France just 25.

Most analysts and even automakers now say that the first widespread use of hydrogen fuel cell technology will be in commercial vehicles, which travel a defined route each day and can return to a depot for refueling, overcoming some of the infrastructure limitations.