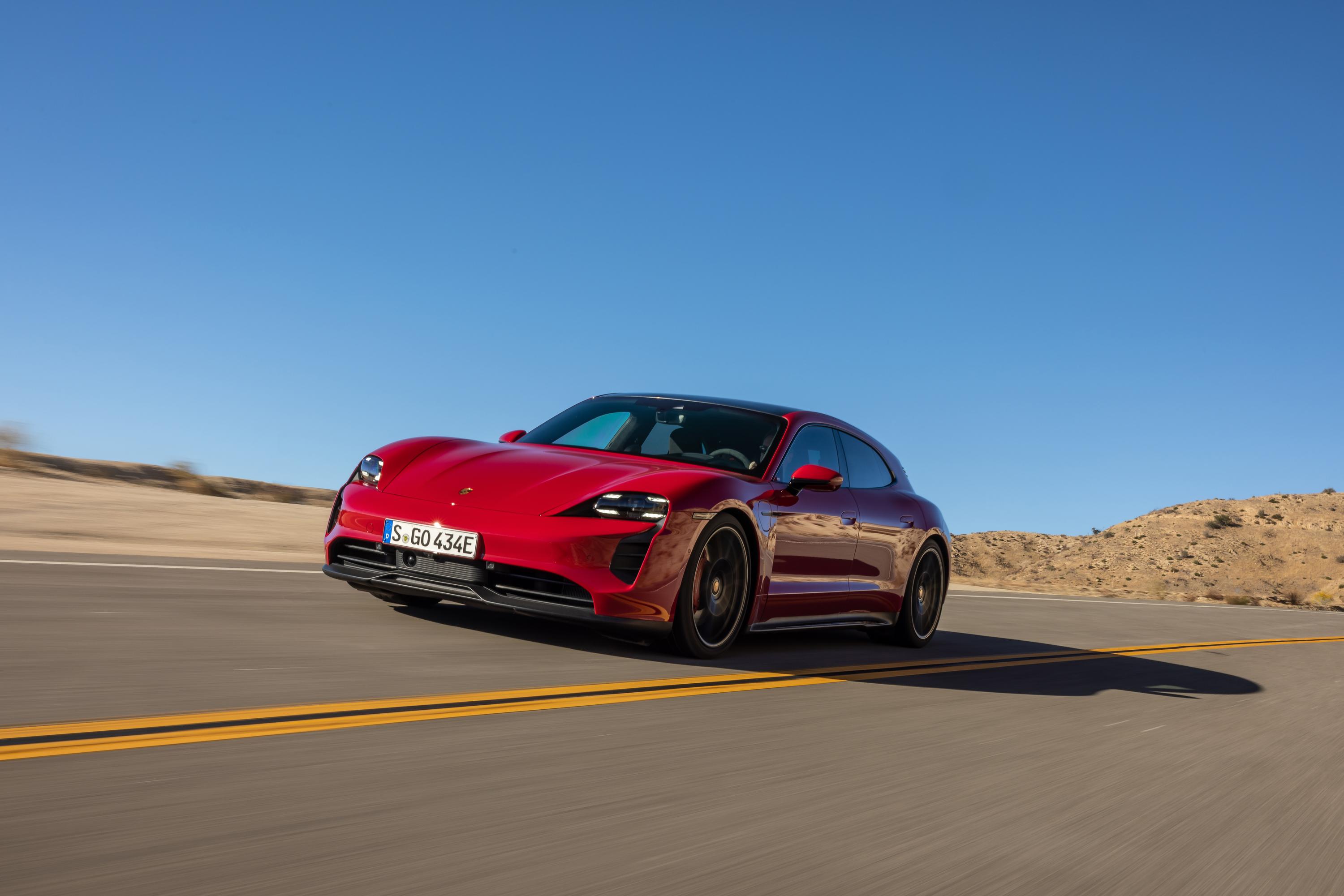 This shouldn’t be possible. No car that weighs 5,152 lb and spans 16.3 feet should be able to transfer its considerable weight from one side to the other and back again like the 2022 Porsche Taycan GTS Sport Turismo I’m flogging on Southern California’s Angeles Crest Highway. No sports car I’ve driven here has sounded like a hovering spaceship, either, and very few sport wagon body styles.

Then again, anything is possible given the physics of a low-set battery teamed with advanced suspension technologies and Porsche’s engineering wizardry.

Porsche already proved an electric car can be truly sporty when it launched the Taycan sedan with the Turbo S model two years ago. The GTS may not match the Turbo S for power, but Porsche tuned it to handle even better and serve as the best model for a track day. 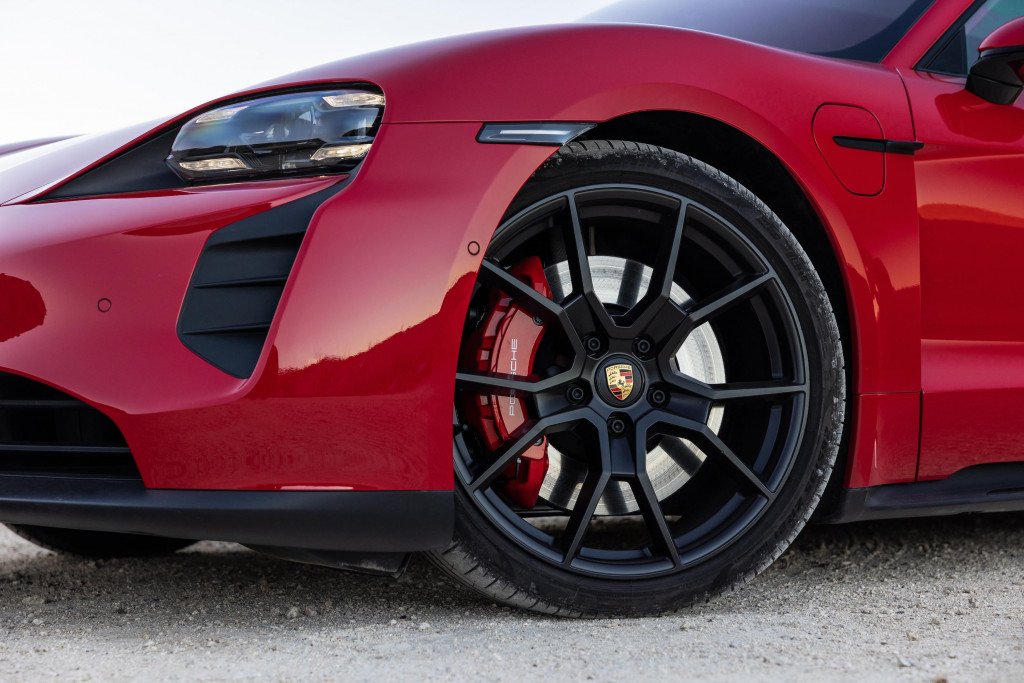 Like other Taycans, the GTS comes standard with an air suspension and adaptive dampers. Here, however, they’re stiffer to further enhance lateral dynamics. My test car rides on the optional 275/35R21 front and 305/30R21 rear Michelin Pilot Sport 4S tires (245/45R20 front and 285/40R20 rear tires come standard). If anything is going to corral all that weight, it’s a big set of sticky shoes.

Those shoes are certainly doing the job on this mountain road as I string together esses and switchbacks with confidence. I push the car hard through the corners and it just grips. I don’t run all the way up to the limits of adhesion because that’s ill-advised anywhere other than a racetrack, but the GTS rotates readily thanks in part to optional rear-axle steering, feels balanced front-to-rear mid-corner, and sends the power efficiently to the pavement via an optional electronically controlled limited-slip differential (a mechanical unit is standard).

If I were to push it harder, the stability control’s Sport mode would let me because Porsche engineers loosened it up versus the already lenient version in other Taycans.

I’m most impressed by how flat the car stays when confronted with lateral G forces. Credit the low center of gravity of the 86-kwh battery, and the control afforded by the air suspension and adaptive dampers. Those dampers also manage to retain a decent ride quality despite the big tires and big capability. This is a true sports car, and its wagon body style makes it feel like a Ferrari FF for the electric era.

Porsche tunes electric-assist power steering better than anyone, and its quick reactions and weighty precision help me place the car exactly where I want. The tuning is unique to the GTS, too. Porsche engineers tweaked it for even more feel. It’s a delight on the highway as well, thanks to rock-steady on-center stability.

Porsche gets the brake feel right as well, and that’s rare for an EV. When I hit the pedal, the first 0.5 G of stopping force comes via regenerative braking. There’s no regen without hitting the brakes, so the Taycan by default glides like a car with a gas engine. From there, six-piston front and four-piston rear calipers grip 15.4-inch front and 14.1-inch rear rotors for confident deceleration. The blend from regen to friction braking is largely imperceptible. It will take a Princess and the Pea kind of sensitivity to detect it. 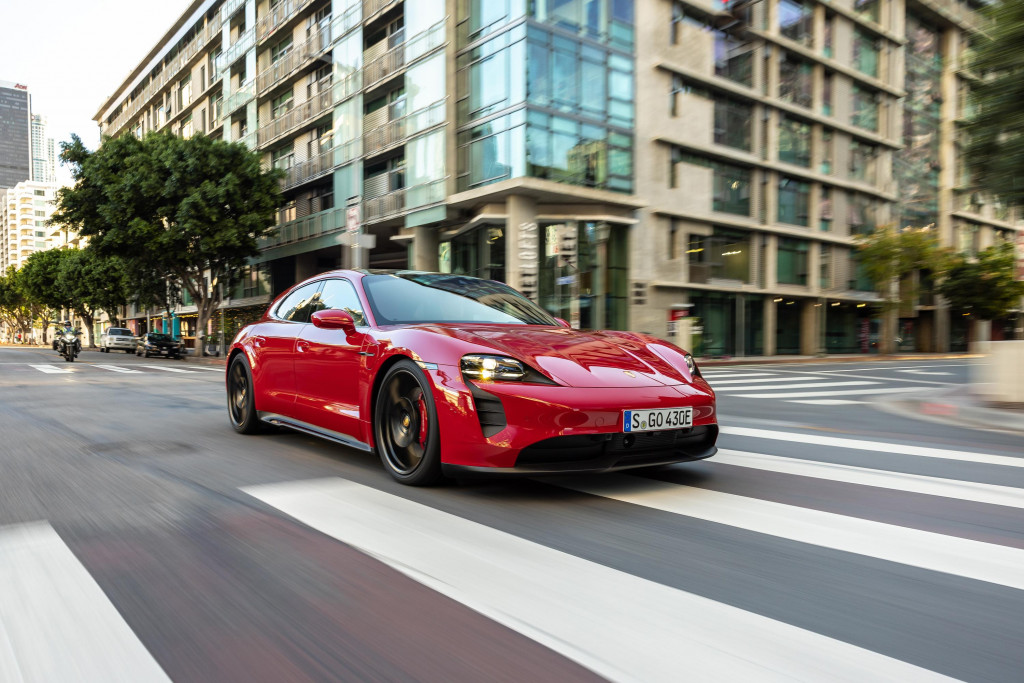 The same goes for the shifts in the rear-mounted 2-speed transmission. Unlike most EVs that use single-speed transmissions, the Taycan adds a gear to provide better launch power at low speeds and better efficiency at higher speeds. It changes over at about 60 mph in the Sport modes, and it’s hard to detect even though Porsche purposely added some feel to the shift. In the more docile modes, it changes over at 3-4 mph and the shift takes place completely behind the scenes.

The transmission shares the rear axle with the eLSD and Porsche’s larger permanent magnet rear motor, which comes from the Taycan Turbo. The smaller front motor teams with the rear motor to make 590 hp and 626 lb-ft of torque when Launch Control is engaged and 509 hp at all other times. The horsepower figure is down from the Turbo’s 670, but the torque figure is the same. A Porsche rep explained horsepower was reduced for better thermal capacity in the rear motor, which will help it last longer when going hard on a racetrack. 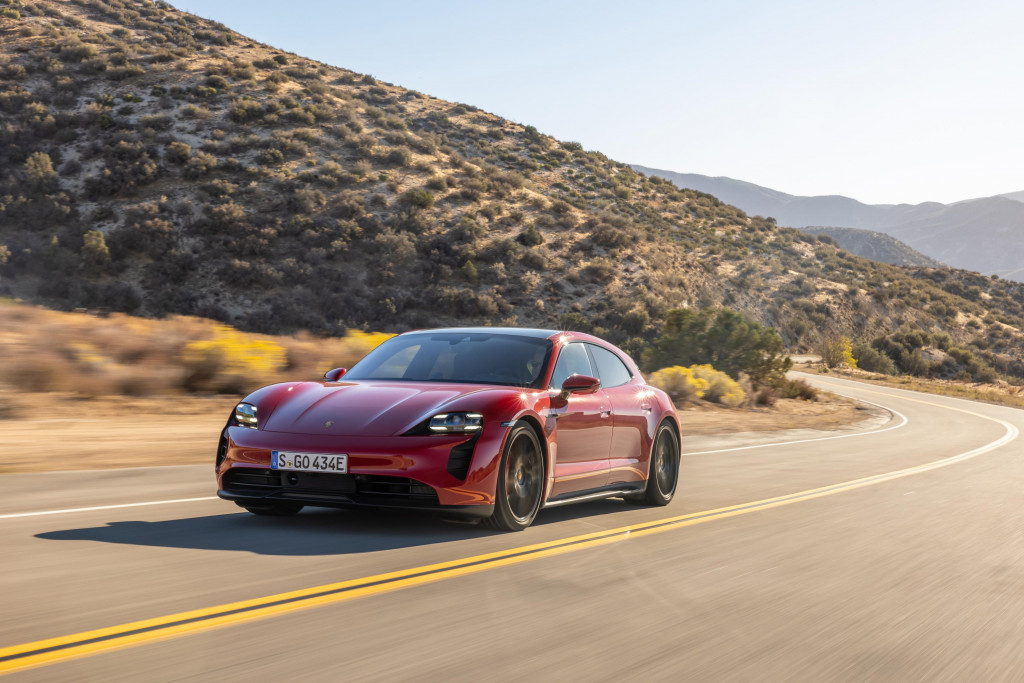 Anyone who hasn’t driven a high-power electric car will get a shock, both to the senses and the spine, the first time they floor a Taycan, and the GTS is no exception. The power comes on immediately, zapping the car from 0-60 mph in a tight 3.5 seconds. Depending on the mode, passing power is either at the ready (Comfort or Eco modes) or chomping at the bit (Sport or Sport+ modes).

The modes also change the synthetic motor sound, which is louder in the GTS. It stays mostly in the background in Comfort and Eco, ramps up in Sport, and has the sound of a hovering spaceship in Sport+. While Porsche pipes the sound through the speakers (with exterior speakers for pedestrians), it all started with the electric motors. Porsche put them in a studio, recorded their sounds, and removed the higher frequencies and enhanced the lower frequencies for the car’s soundtrack. The sound you hear is programmed to match the throttle position. 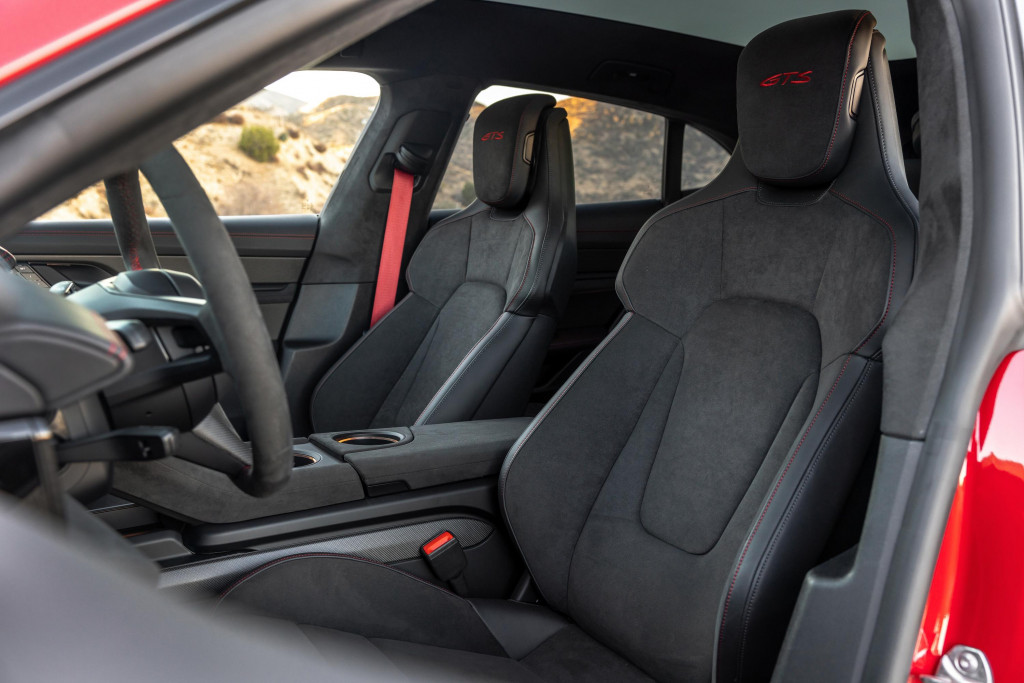 Like a Porsche should, the Taycan GTS Sport Turismo feels sporty from the cockpit. Even though the battery pack rests under the floor, the seating position isn’t elevated. It’s properly low and the steering wheel is properly small. Standard leather and synthetic suede 18-way power-adjustable front seats provide plenty of lateral support while coddling a wide range of body types. The faux suede also adorns the dash, headliner, and steering wheel, where it provides a wonderfully tactile feel.

The Sport Turismo body style has the same interior space as the Cross Turismo, with 15.7 cubic feet of cargo space behind the second-row seat and 42.8 cubes with the rear seat folded flat. It offers more utility than a typical sedan, but less than most wagons. The real advantage to my eye is the look. The Sport Turismo sits at the same ride height as the Taycan sedan, 0.8 inch lower than the Cross Turismo, and it lacks that car’s dark cladding. Sport mode drops the ride another 0.4 inch and Sport+ and Range modes take it down a total of 0.9 inch. A wide wagon with black accents, fat tires, and a low stance is cool in my book. 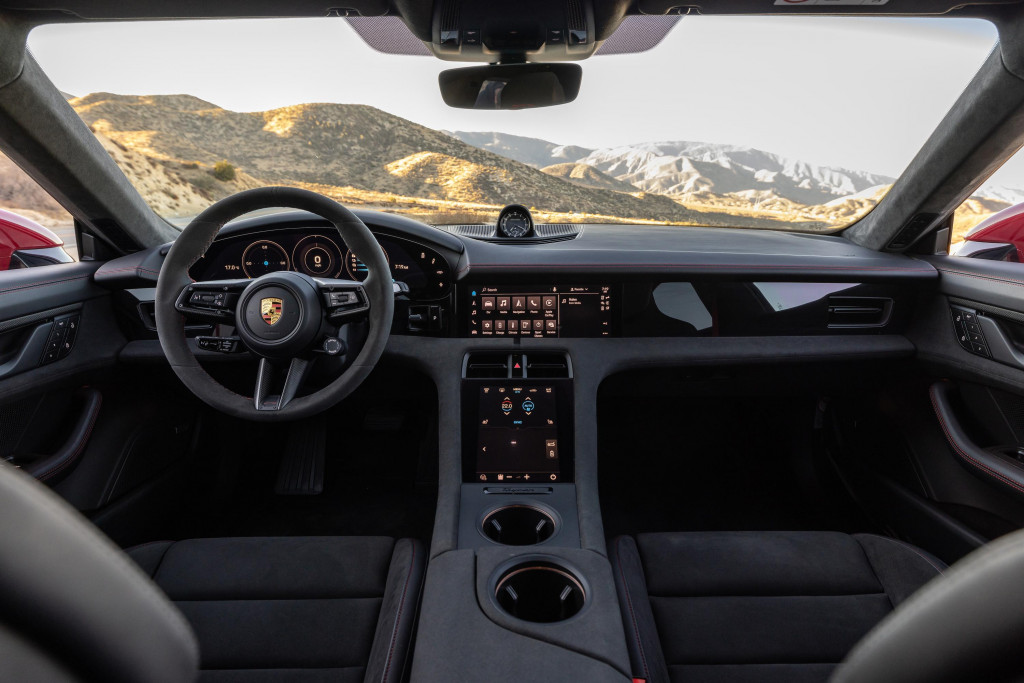 Porsche has yet to announce the Taycan GTS’s EPA range, but expect it to be about 200 miles. The car I drove indicated 227 miles when I started with a 98% charge, and just 80 miles of hard driving on the roller coaster that is Angeles Crest cut the battery charge to 24% and had the car guessing its remaining range at just 47 miles. That’s to be expected; do the same in a car that gets 20 mpg the rest of the time and you can expect fuel economy around 8 mpg or lower.

Near the end of the trip, charging the Taycan proved easy. Driving a different car, a Taycan GTS sedan that hadn’t been driven so lustily, I rolled into an Electrify America station with a 38% charge. With a decent amount of charge on board and the battery not preconditioned for charging, the Taycan’s 800-volt system charged at a rate of 144 kw out of the Taycan’s maximum 270 kw and accepted a 13% charge in about 4 minutes. Another car that had been run down to 5% charged at a rate of 245 kw. Porsche supplies 30 minutes of free charging at EA stations for Taycan buyers for the first three years.

Porsche paid for airfare and lodging for Motor Authority to bring you this firsthand report.