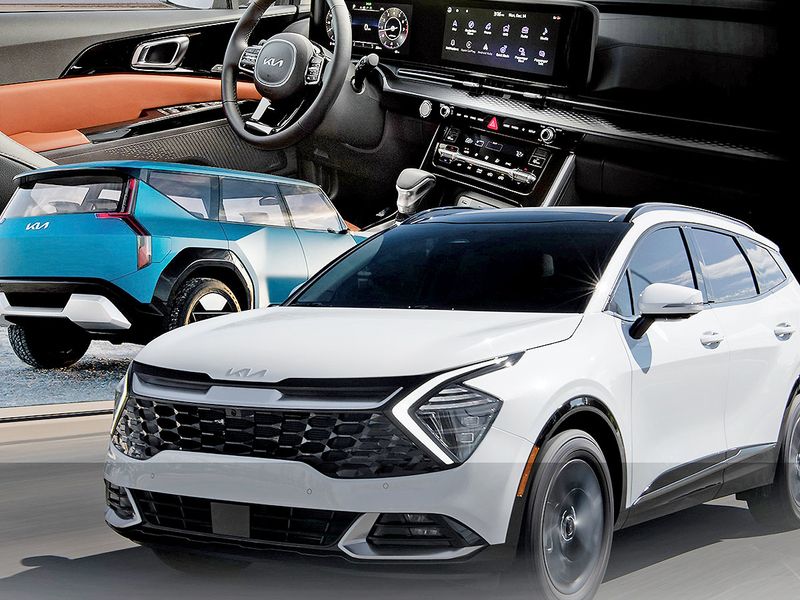 Kia America is celebrating the holidays early after beating its U.S. sales record well before New Year’s Day. And despite the pandemic and parts shortages, 2022 is looking bright as the automaker introduces a stylish electric crossover.

It took Kia just 11 months this year to beat its full-year sales record from 2016, when it sold 647,598 vehicles. Most of those sales five years ago came from relatively inexpensive cars such as the Soul, Rio, Forte and Optima.

Through November of this year, Kia sales hit 652,910, and most were crossovers such as the Telluride, Sorento, Sportage and Seltos. Assuming a relatively flat December compared with 2020, Kia is positioned to break 700,000 deliveries for the year — or come close.

“Breaking the all-time annual sales record with one month left in the sales cycle is concrete proof that demand for Kia vehicles is on the rise and has been throughout the year,” said Eric Watson, vice president of sales operations at Kia America.

To be sure, the Korean automaker is struggling with the chip shortage and tight inventories as other automakers are. But Kia has done a better job managing inventory out of its plants in South Korea and West Point, Ga.

While the Georgia-built, three-row Telluride large crossover has been in short supply since its introduction for the 2020 model year, Kia dealer Ryan Gremore said nearly everything in the lineup is on fire. That includes the brand’s redesigned and renamed Carnival minivan, the Seltos subcompact crossover and the redesigned and renamed K5 midsize sedan.

“Killing it,” said Gremore, president of the multibrand O’Brien Auto Team in Bloomington, Ill. “We outsold all of our brands last month by 30 percent with Kia, and continue to have a list of pre-ordered cars that people are waiting for.”

Customers are already signing up for the redesigned 2023 Sportage compact crossover that will launch in the first half of 2022 with a significant increase in size. “A lot of interest,” Gremore said in an email. “I’ve never seen so many people buy vehicles without seeing them.”

The key to Kia’s success, dealers and industry analysts say, is product and price. A wave of new and redesigned vehicles in the past few years has grabbed the attention of consumers. Kia now has crossovers in all sizes and compelling cars.

“Kia is carving out a position and image for plenty of personality at a reasonable cost point,” said Stephanie Brinley, principal automotive analyst at IHS Markit. “It is no longer a cheap car, but most models offer more than you might expect for the price point.”

The brand has also been willing to take risks. The Carnival minivan blends the utility of the family hauler with SUV design elements. The Carnival, which replaced the ho-hum Sedona, also has a surprisingly premium interior at the top trim levels.

“Though the Carnival is not bringing as much volume as SUVs, its blend of SUV flair and minivan practicality does seem to be catching on,” Brinley said. While rivals are also experimenting with utility vehicles, Kia is strong in styling and pricing, she said.

To be sure, the semiconductor shortage has scrambled the auto industry landscape. Traditional leaders have fallen on hard times as chips dry up, while some challenger brands such as Kia have been able to gain share with more vehicles on dealership lots.

“We have to remember that results are skewed by the semiconductor and supply chain issues,” Brinley said. “For roughly the second half of the year, available inventory is driving sales as much as brand and product attributes.”

Kia outsold sibling brand Hyundai in November by nearly a thousand cars. Hyundai is the larger and more established Korean brand in the U.S. It was still on top through November, posting sales of 686,741 for a 24 percent jump over last year.

Luxury brand Genesis, also under the Hyundai Motor Group umbrella, has more than tripled sales this year on the recent introduction of its first crossovers. In fact, Kia’s success is a broader reflection of a focus on fresh product by Korean marques.

Hyundai Motor Group is now preparing for an electric vehicle onslaught, starting with the Hyundai Ioniq 5 crossover in showrooms by the end of the year. Kia’s EV6 crossover arrives in U.S. showrooms next year, along with two Genesis EVs.

At the Los Angeles Auto Show in November, Kia showed off the Concept EV9 three-row crossover and suggested its next production EV would be similar in size. The company also presented the ambitiously styled new-gen Sportage for North America.

“With the all-new Kia EV6 arriving soon and the Sportage including hybrid and plug-in hybrid models arriving throughout the first half of 2022, we are confident that the interest in Kia will not wane anytime soon,” Watson said.