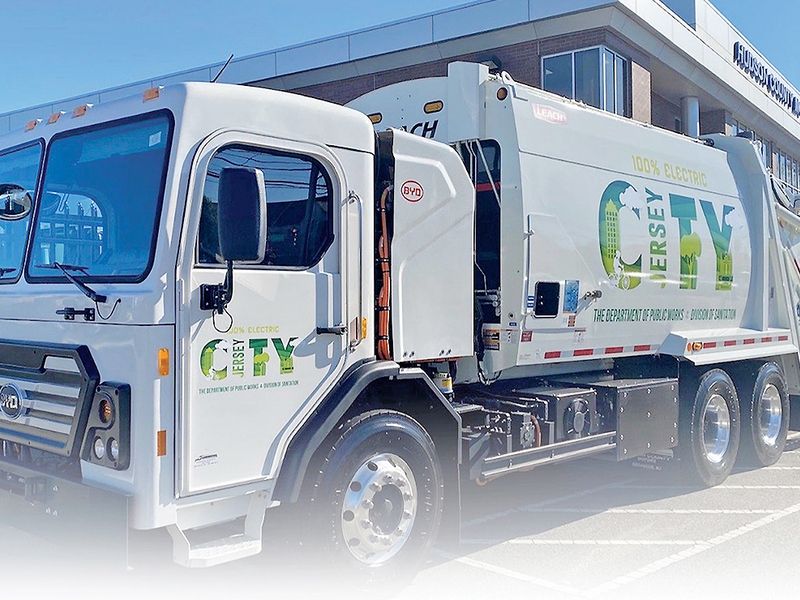 As the stock market swoons over electric vehicle companies such as Tesla and Lucid, another EV revolution is about to change the way America works. This one, though, is unlikely to ever become a trending topic on Twitter.

Electric work vehicles, including refuse trucks and buses, have started reaching streets across the country.

One of the places where electric work vehicles are already in service is New York City. The Department of Sanitation started using an electric street sweeper in May and has been testing a 72,000-pound electric refuse truck since November 2020. That truck, a Mack LR Electric, was first shown as a prototype at WasteExpo 2018, and serial production is scheduled to start at Mack’s Lehigh Valley Operations facility in Pennsylvania before the end of the year.

“It’s been in service for a year and it’s been flawless,” said Rocky DiRico, Department of Sanitation deputy commissioner for support services.

The truck picks up and compacts around 12 to 13 tons of garbage per shift and has been tested on routes all around the city. There are seven sanitation zones in New York City, and because the EV test has been so successful, the city has ordered seven more electric trucks — one for each zone — that will go into service at the end of 2022. New York City plans to order seven more after that.

“That would put two in each zone,” DiRico said. “If they all perform as well as the first one, then we would apply some serious numbers.”

Serious numbers would give Mack plenty to do in the coming years. New York City’s sanitation department uses about 6,000 vehicles throughout the city, and the majority today are diesel Mack trucks. It will take time to replace them all with EVs, though, because of how long it takes to build them and the price tag. A typical refuse collection truck costs about $340,000 while an electric version is closer to $550,000, DiRico said. But, grant money available from the Volkswagen diesel lawsuit brings the cost of the EVs below that for a clean-diesel truck, DiRico said,

“Our intention is to use that very same grant money to buy the next seven, and the seven after that, so the cost differential becomes moot,” he said.

The city also is working on installing the charging infrastructure to handle all of these vehicles, which will help with more than refuse trucks. The city passed a law that requires all municipal vehicles to be zero emission by 2040.

“We feel confident in Mack’s ability to build and in our infrastructure plan to get this done much more quickly than 2040,” DiRico said.

Mack Trucks, part of Volvo Group, also is testing its electric refuse trucks with Republic Services in North Carolina as well as other partners that have not made their plans public, said Scott Barraclough, senior product manager for e-mobility at Mack Trucks.

Any city interested in switching can use a smartphone app with their diesel trucks to analyze the route and determine whether an electrified model would work there. The Mack LR Electric has about a 70-mile range, but that can vary based on how many garbage pickups it makes on a route, since the compaction mechanism is powered by the battery as well. The trucks can be fully charged in about 90 minutes using a 150-kilowatt fast charger, if needed, but most of the time that won’t be necessary.

“The duty cycle of refuse trucks really lend themselves to electrification,” Barraclough said. “Many of the routes are shorter and predictable, so you know what the trucks are going to be doing. And they’re home every night, so you know where to put the infrastructure for charging.”

Mack has competition in the electric refuse-truck business from BYD, which offers two models in the U.S. There’s the 8R, which roughly matches the LR Electric’s weight at 72,750 pounds, and the smaller, 26,000-pound 6R. Battery sizes range from 211 kilowatt-hours to 403 kWh, depending on the truck and whether it’s an extended range model.

About 20 of BYD’s Class 8 refuse trucks are in use in the U.S., said George Miller, BYD’s director of sales for national fleets and electric trucks. J&M Sanitation in Idaho has deployed them, as have cities such as Palo Alto, Calif., and Seattle. Jersey City, N.J., just took delivery of the first of five of BYD’s fully electric garbage trucks in November.

Counting products such as delivery vans, BYD has about 200 electric trucks, about 80 Class 8 semi-tractors and between 500 and 600 electric buses on the road today, Miller said.