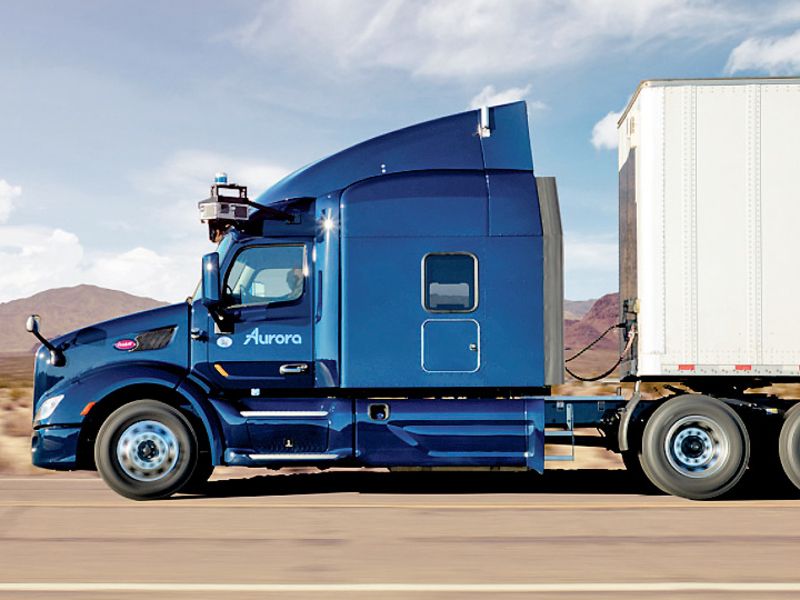 Editor’s note: An earlier version of this story overstated Ryder Ventures’ role in Gatik’s funding round.

Here’s a look at what each company has done in 2021, and where they stand heading into next year.

Few companies have been busier than Aurora in 2021. At the outset, the company began integrating nearly 1,000 employees who came with Aurora’s late-2020 acquisition of Uber Advanced Technologies Group. Most recently, Aurora completed its reverse merger with special purpose acquisition company, or SPAC, Reinvent Technology Partners Y, a transaction that netted the company $1.8 billion in cash proceeds.

In February, it purchased OURS Technology, a lidar company that can help manufacture Aurora’s FirstLight lidar at scale.

Robotaxis remain on Aurora’s road map, but the company is first focusing its efforts on self-driving trucks. Along those lines, it partnered with FedEx in September and will haul goods for the logistics giant in the Dallas area. Further, Aurora unveiled the fruits of a long-standing partnership with Volvo Trucks, an autonomous truck platform called VNL.

Beyond those partnerships, Aurora launched two with truck manufacturers Paccar and Volvo. Working with them, Aurora says, it plans to launch its commercial trucking business, called Aurora Horizon, in 2023.

It’s been nearly four years since Einride brought its autonomous electric truck concept to the North American International Auto Show in January 2018. Now the company is back in the U.S. in a big way.

Einride opened its U.S. headquarters in New York in late October and has set up regional operations in Austin, Texas, and San Francisco. While it’s been testing on public roads in Europe since 2019, Einride does not yet have a launch date for U.S. testing or operations. Contracted customers include GE Appliances, beverage provider Oatly and Bridgestone, which shares a technical partnership with Einride.

The distinctive trucks of the Swedish company have no cab or human safety driver.

But Einride has hired what it claims are the world’s first remote truck drivers. These employees may be responsible for monitoring as many as 10 trucks at a time operating in autonomous mode.

Embark, in mid-November, became the latest self-driving truck company to go public via a SPAC, netting approximately $614 million in the deal, which valued the company at $5.2 billion.

The San Francisco-based company claims to be the longest running self-driving truck program in the U.S., founded at a time when much of the autonomous-tech industry remained focused on robotaxi applications.

At age 26, CEO and co-founder Alex Rodrigues ranks among the youngest CEOs of a publicly traded company in U.S. history.

Key partners include trucking carriers Werner Enterprises and Bison Transport. The company is also working with shippers AB InBev and HP Inc. Embark is eyeing commercial deployment and delivery in 2024 and says it has 14,200 nonbinding reservations for its self-driving trucks.

Those trucks will come with long-range lidar provided by Luminar. After three years working together, Embark and Luminar announced a formal partnership in November.

In August, the company reached an industry milestone, becoming what’s believed to be the first self-driving truck company to remove human safety drivers from behind the wheel in ongoing, regular commercial service. The company has slid its safety drivers over to the passenger seat during operations on a 7.1-mile route in Bentonville, Ark., that connects a Walmart dark store — a mini-warehouse for fulfilling orders — with a local outlet. Two driverless trucks are assigned to the route on a daily basis.

In October, Gatik closed an $85 million funding round. Ryder Ventures, the venture capital arm of the trucking logistics company, participated. It was the venture fund’s first investment in an autonomous trucking company. Ryder and Gatik are collaborating on building out an autonomous delivery network across the U.S. and Canada. They’ll focus on the Dallas-Fort Worth area initially.

Kodiak added to its coffers in November, raising $125 million in its series B fundraising round. The company said the fresh funds would allow it to hire 85 employees, doubling its head count, and add at least 15 trucks to its fleet.

Notably, the company intends to start forming a coast-to-coast network for its autonomous-driving capabilities. Currently, the company delivers freight for paying customers between Dallas-Fort Worth and Houston. Kodiak conducted the round trip between Dallas and Houston on Interstate 45 without disengagements in four consecutive trips, achieving 829 consecutive miles under autonomous-only control.

“The supply chain challenges we have seen over the last 18 months only underscore the importance of autonomous trucking to the future of America’s economy,” CEO Don Burnette said.

Rather than dock-to-dock operations, moving goods directly from warehouse to warehouse, Kodiak believes autonomy’s first wave will arrive on highways only, while human drivers take over at “truckports” located alongside interstates to handle the driving on more complex surface streets.

Interstates are not the only place the company has tested. In the spring, it struck a partnership with the U.S. Air Force and signed a 15-month contract to explore ways some operations might be automated at Dover Air Force Base in Delaware.

How might automation play a short-term role in solving the driver shortage and supply chain logjam? Perhaps with technology such as the kind Locomation is developing.

The Pittsburgh-based company has developed a two-truck system, in which a lead truck operated by a human driver can be paired to a second one that follows behind with autonomous and connected technology.

Though the Federal Motor Carrier Safety Administration is still studying emerging trucking business models such as these convoys, Locomation envisions a resting, off-the-clock driver in the trailing big rig. Periodically, the trucks could switch places to allow one driver to lead while another rests. It could allow for trips of 20 to 22 hours within hours-of-service regulations.

To date, Locomation has raised $63 million in funding, according to Crunchbase. In October, the company said it had partnered with Cummins to integrate its autonomous systems with the engine manufacturer’s powertrain systems.

Shortly before an expected public listing in November, Plus pulled the plug on its blank-check merger with Hennessy Capital Investment Corp. V. The two companies cited developments in the regulatory environment “outside the United States” as the reason, though both expressed hope the deal would come to fruition at a later date.

But a big order for Amazon remains unaffected. Amazon has ordered 1,000 of the PlusDrive driver-assist systems, the company’s first on-road product. Deliveries of the system began in February and continue to Amazon and other customers, such as Chinese truck manufacturer FAW.

Plus says it has preorders from Chinese truck fleet operators Rokin, Dhihong and Duckbill. Plus projects more than 100,000 of its PlusDrive systems will reach public roads by the end of 2025.

One differentiator for the company, which has operations in both the U.S. and China: The company has taken an evolutionary approach, starting with driver-assistance systems and building toward fully autonomous ones.

The rest of the industry may be racing toward self-driving trucks. Pronto is racing in the opposite direction. Started as a company building both driver-assist and self-driving systems, Pronto is now pursuing applications for autonomy in off-road environments.

“The simple truth of the matter is that we are still years away from having driverless vehicles at any meaningful scale on public highways or city streets, and commercially viable AV deployments will take much longer,” Pronto’s Anthony Levandowski said in a September blog post that announced another development — his return as CEO.

Levandowski had been on hiatus while he faced charges of stealing trade secrets from Google during his tenure with the company. He pled guilty to a single count and was later pardoned by Donald Trump during the former president’s final days in office.

Refocused at Pronto, he says autonomous-driving technology is ready for off-road markets and commercially viable now.

Before the DARPA challenges provided a kick-start for the entire autonomous-vehicle industry, Robotic Research had been developing AVs for the U.S. military. Founded in 2002, it has collected “a gigantic amount of edge cases and seen a lot of different operating environments,” CEO Alberto Lacaze said.

The Maryland company’s commercial division tech has been applied to a multitude of vehicles — tugs, shuttles, heavy-duty transit buses and long-haul trucks, to name a few. While most companies pick one application, Lacaze considers the versatility a strength.

“We think of it more as a 360-degree operation,” he said. “A truck doesn’t live on the highway only. Sometimes it’s first mile, last mile. Sometimes it’s a truck yard. Sometimes it deals with pedestrians, or unusual terrain or weather. People create these lines for particular applications. It turns out most applications need different kinds of autonomy, as well.”

In June, Robotic Research partnered with Verizon, Local Motors and others to deploy self-driving shuttles at Marine Corps Air Station Miramar in California. In August, Robotic Research reached an agreement with transit operator NFI Group Inc. to increase the deployment of its driver-assist systems in buses throughout North America.

Born from a group of Virginia Tech students intent on continuing their work in autonomous software and robotics, Torc Robotics first caught attention when it helped the “Victor Tango” team at the DARPA Urban Challenge.

After Torc pursued military and mining applications of autonomous vehicles for several years, Daimler acquired a majority share of the company in 2019. Now in their third year of collaboration, the companies are testing Level 4 self-driving trucks in New Mexico, Virginia and Texas, and say they’re working on route expansions.

So far, Torc CEO Michael Fleming favors a simplified approach, using Daimler Trucks’ Freightliner Cascadia for long-haul trucking on U.S. interstates. “Commercializing self-driving trucks is a very complex endeavor, and we are first solving the least-complex use case, then expanding our reach as the technical capabilities are proven,” he said.

TuSimple is close to building out the nation’s first coast-to-coast autonomous freight network as it pursues development of self-driving technology.

In a November quarterly earnings call, the company unveiled efforts to map new routes between its operational hub in Dallas and Orlando and Charlotte. With a route established between Phoenix and Dallas, TuSimple’s geographic reach covers nearly all the southern United States.

Both new routes will help the company expand its partnership with UPS, which has already accounted for 160,000 paid miles of freight hauling. While testing in automated mode, the company’s trucks achieved a 13 percent fuel savings, TuSimple says, compared with human drivers.

TuSimple will further sideline human drivers this month. The company expects to follow competitors such as Gatik and Plus by removing human safety drivers from certain operations. In TuSimple’s case, the company says it will go “driver out” during frequent trips between Phoenix and Tucson by the end of the year.

The company added 138 employees to its R&D division during the third quarter, bringing its head count to approximately 1,000 in R&D and 1,300 overall.

Waymo has begun installing its fifth-generation virtual driver into its truck fleet, a significant development, as it comes with an overhaul of its sensor package and software.

The company runs its testing from its metro Phoenix operations hub, but it is currently building a “primary operations center” for its trucking business in Dallas. Waymo is not stating a timeline for launching commercial operations.

In mid-November, Waymo expanded its partnership with UPS. With the holiday season looming and ports and trucking overwhelmed, the two companies are moving beyond local deliveries and into Class 8 truck freight movement. Waymo will transport goods between UPS’ North American Air Freight units in Dallas-Fort Worth and Houston.

The Class 8 trial runs will build upon previous work the two companies have done together, as well as Waymo’s other work with partners that include J.B. Hunt.

In October 2020, Waymo entered into a partnership with Daimler Trucks, which is building an autonomous-ready version of its Freightliner Cascadia truck chassis that comes with redundant systems.