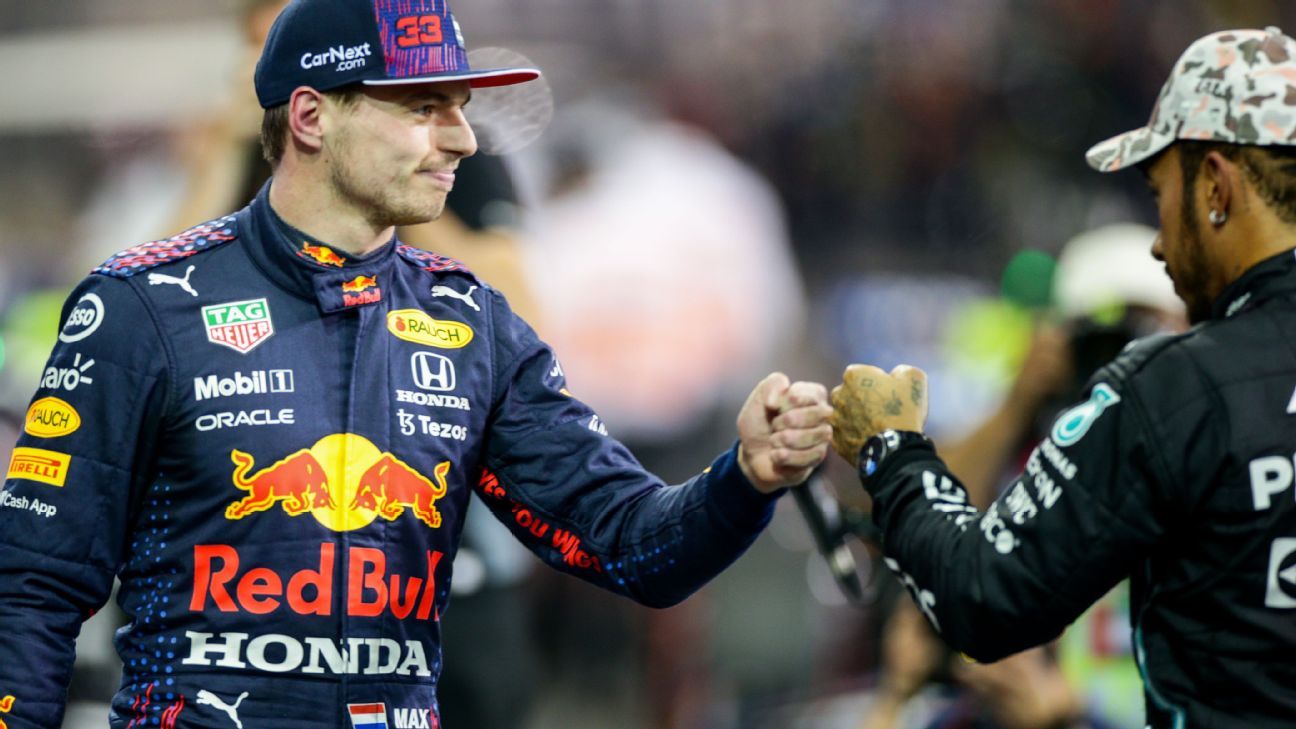 ABU DHABI, United Arab Emirates — Max Verstappen and Lewis Hamilton will start alongside each other on the front of the grid at the title-deciding Abu Dhabi Grand Prix. Any other front row would not have seemed right ahead of Sunday’s winner-takes-all showdown, and given the performance of the two title rivals at recent races it was never really in doubt.

Verstappen’s 0.3s advantage over Hamilton was a surprise, however. Throughout practice and the first two sessions of qualifying, the Mercedes driver held the advantage. But when it mattered, when the pressure was at its highest, Verstappen delivered.

“I’m incredibly happy with this,” he said after getting out of the car. “This is of course what we wanted.

“It is never easy, especially with their form in the last few races, but now I’m just looking forward to tomorrow because of course that’s the most important thing.”

Everything you need to know about Verstappen vs Hamilton

Hamilton also rose to the occasion and delivered a good lap, but after the session he said his car simply wasn’t fast enough to challenge the Red Bull.

“The last lap was nice and clean, I just couldn’t go any quicker,” Hamilton said. “I don’t know if it’s tyre prep or something in terms of the outlap but nonetheless I couldn’t beat that time that he did today. He fully deserved the pole.”

Verstappen was aided by a slipstream on the back straight from teammate Sergio Perez on his fastest lap, but it wasn’t a big enough advantage to account the entire 0.371s gap. The pre-agreed, perfectly-orchestrated example of teamwork saw Perez leave the pits first and punch a hole in the air along the fastest part of the track between Turns 7 and 9, which Verstappen was then able to exploit to reduce the drag acting on his car.

The tow increased Verstappen’s speed along the straight, but a quick glance at the sector times on his fastest lap hints at something even more special towards the end of the lap. In the middle sector where the slipstream took place, Verstappen was 0.140s faster than Hamilton, but he gained a further 0.182s in the final sector where he was very much on his own threading his car between the barriers under the W Hotel.

“I think that’s one of Max’s best laps of the year. Even on the following lap that we got him to back off on, he matched the time [without a tow],” Red Bull team principal Christian Horner told Sky Sports.

“We discussed the slipstream this morning and we lowered the downforce [on the car], because it was the only way of matching these guys [Mercedes] on the straights.

“The tow was probably worth a tenth, a tenth or two, not half a second and I think that his last sector, when you look at the level of downforce he’s got on is insane, absolutely insane.”

Verstappen’s reward for his performance on Saturday night will be a starting position eight metres ahead of Hamilton on Sunday’s grid and on a piece of tarmac affording more grip than his teammate’s. The racing line cuts diagonally across the start-finish straight at the Yas Marina Circuit, but by the time it reaches the front row it is further to the right, meaning there is more rubber on Verstappen’s side of the grid and more grip.

If the race is as processional as previous Abu Dhabi Grands Prix, those eight metres and the better grid slot could be enough to secure Verstappen his first championship — the last six drivers to win in Abu Dhabi have done so from pole. But given the narrative of the 2021 season so far, a lights-to-flag victory seems unlikely.

The chances of an exciting race are helped by the strategies of Verstappen and Hamilton being offset from the start. Due to F1’s rule that requires the top ten drivers to start the race on the same set of tyres they used in the second session of qualifying, Verstappen will line up on the grid on soft tyres while Hamilton starts on mediums.

Speaking after the session, Verstappen revealed it wasn’t Red Bull’s plan to start on the softs, but a lock-up at Turn 1 on his set of mediums in Q2 meant he didn’t want to start the race on that set in case the tyre was damaged.

“Naturally it wasn’t the plan, because I wanted to start on the medium but I flatspotted that one,” Verstappen said. “But I felt good also on the long run on the soft, so it was not really a difficult decision to make to then switch to just focusing on the soft.”

Hamilton was sceptical, suggesting Red Bull may have had soft tyres in mind all along.

“It’s interesting,” Hamilton said. “I’m always kind of sceptical with everything so it’ll be interesting when we go back and look at the information and onboard laps, it’s very rare that people lock up in Turn 1 but if he truly did lock up in Turn 1 then maybe whether or not we’re in a better position in terms of that tyre.

“Maybe they know something we don’t and that soft tyre was their plan all the time. We struggled a bit more on soft tyre for the long runs, so I think we’ve got the right tyre, but we’ll see tomorrow.”

Verstappen’s softs should provide a quicker getaway from the line and better performance on the opening lap, but as the first stint develops the performance advantage should swing back towards Hamilton’s mediums. What’s more, Hamilton will have more flexibility on strategy by starting on mediums, allowing him to go longer into the race on the same set of tyres if the Mercedes pit wall believes it will offer an advantage and attempt a one-stop race if Red Bull’s tyre choice leads them on to a two-stop.

“The two-stop is always a viable variant if you think that you can attack and go on a two-stop or you can manage and try to make a one-stop which could be tricky at the end,” Wolff said. “I think we need to see.

“We saw quite some degradation on the soft tyres in the long runs in practice, less so on the mediums which makes it exciting in terms of the strategies. But definitely also for us, a one-stop looks good and a two-stop is definitely on also as a variant.”

Although he hasn’t started from pole position since the U.S. Grand Prix in October, Verstappen’s qualifying performance isn’t entirely against the run of form. On pure pace, Verstappen should have started on pole a week ago in Saudi Arabia but crashed at the final corner of his final qualifying lap when he looked set to secure a 0.3s gap over Hamilton on that circuit.

On Sunday in Saudi Arabia, the tables turned as Mercedes was able to make better use of its tyres over a race distance, giving Hamilton a clear advantage at the end of the race. In Abu Dhabi, Wolff said Mercedes had intentionally sacrificed some qualifying performance in order to make the car faster in the race.

“We definitely tried to because we were so much underperforming on the long runs that we went to more the direction that we had on Friday in trying to preserve the tyre,” Wolff said. “But having said that, we were really not competitive against the Red Bulls so whatever step we take we hope it’s going to go in the right direction. There’s no guarantee it’s going to be enough tomorrow and fundamentally the quicker car is going to win tomorrow.”

And then there’s the question that has hung over the title decider since Verstappen and Hamilton arrived in Abu Dhabi earlier this week: Will the two title rivals collide on track?

Undoubtedly, the prospect of on-track contact has been overplayed in the days leading up to Sunday’s race and is by no means guaranteed, but after three significant collisions this season at Silverstone, Monza and in Saudi Arabia, it can’t be ruled out.

On the basis of the season so far, Verstappen will not give up his lead easily, meaning Hamilton can expect to face a robust defence if he gets close enough to challenge the Red Bull for the lead. What’s more, in a situation where both drivers fail to score points, Verstappen will be crowned champion by virtue of securing one more race victory this season – which is one of the main reasons that speculation over a shunt has been so rampant.

To pre-empt any attempt to win the title with a collision, FIA race director Michael Masi started the weekend by issuing a warning to all drivers that unsportsmanlike behaviour could result in points being deducted from tallies, thereby preventing Verstappen simply driving into Hamilton to win. However, making the distinction between intent and accident will be a thankless task that will almost certainly lead to further controversy.

“I haven’t spoken with Lewis about that because I think the race director warned the drivers about the possible consequences [of a collision],” Wolff said. “I have no doubt that the drivers will race hard because it’s for a Formula One world champion, but I have confidence it will be very clean.

“Hard but very clean, not pushing anybody off or kicking anybody. This is what this epic championship deserves as a final.”