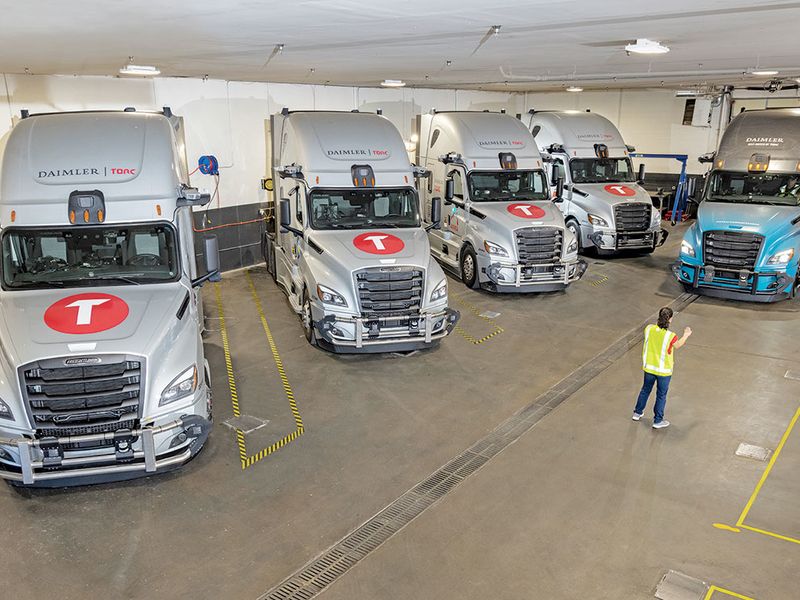 ALBUQUERQUE, N.M. — For most of its 374 miles across New Mexico’s midsection, Interstate 40 runs straight through vast expanses of high desert.

But there’s a geographic blip five miles east of Albuquerque, where the highway squeezes through a canyon in the Sandia Mountain Range, climbs to an elevation of 7,200 feet and wriggles around curves before resuming its monotonous journey eastward to the Texas Panhandle.

Scouting more than 3,000 miles of roads in search of a compelling place to test self-driving trucks, it was this anomaly that captured the imagination of Andrew Culhane.

Along the mountain stretch, he foresaw a bounty of opportunities. Long off-ramps and short acceleration lanes, and vice versa. Going uphill, those road features might be easier to handle. A descent while hauling 80,000 pounds might be more challenging. Light snow. Strong crosswinds. High altitude.

“If you are driving boring roads, you are not informing the product development,” said Culhane, chief strategy officer at Torc Robotics. “Here, we can get a lot of reps faster.”

Most of Torc’s competitors have established operational depots in places such as Phoenix and Dallas and test on long hauls between cities. Torc, an independent subsidiary of Daimler Trucks, resides here in Albuquerque. Specifically, in a former Ford dealership, from which it dispatches a dozen or so Freightliner Cascadia Class 8 trucks for daily testing.

On a mid-November morning, I went along for the ride, sitting in the rear seats, along with Culhane.

Once Torc’s two-person safety driving team receives permission to depart from mission-control specialists, we begin the company’s “Coyote” route, headed up Interstate 25 and easing onto Interstate 40. A blue light near the ceiling illuminates when the truck enters autonomous mode.

Along the way, Culhane explains how the interstate exchanges and rush-hour congestion established Albuquerque as a front-runner in 2020. Inhospitable conditions further enticed him — hot temperatures and high altitude conspire to leave cars and trucks littered along the shoulder on the incline into Tijeras Canyon.

The truck makes autonomous lane changes unprompted by humans, combining pre-mapped information about merges and exits ahead with real-time knowledge about vehicles in adjacent lanes. After a brief stint in manual mode at a turnaround point, the truck handles one of those short on-ramps on a downward spot, adapting to faster highway traffic.

Near the city, it stays in the center lane. It seems like an assertive choice instead of staying in the right lane. But it keeps the truck away from the fray of cars entering and leaving the highway around frequent exits ahead — an insight gleaned from human truck drivers, whose skills Culhane holds in high esteem.

“It’s not the algorithm guy, it’s these guys who know how to get the truck down the road,” he says, gesturing toward our human safety drivers. “That’s who you should be listening to.”

After more than an hour of uneventful travel, we’re back at Torc’s operations depot. For all the seamlessness, the company’s CEO and co-founder, Michael Fleming, cautions about being overly impressed by such demonstration rides.

“The demo case is easy,” he says. “Building a product is more challenging.”

He should know. Counting his time in school at Virginia Tech, Fleming has been honing autonomous-driving technology and the business case to support it for two decades. As a student, he participated in the first two DARPA challenges, autonomous vehicle races sponsored by the Defense Advanced Research Projects Agency, and he helped develop the first self-driving system for team Victor Tango, which placed third in the 2007 DARPA Urban Challenge.

Torc Robotics, headquartered near Virginia Tech in Blacksburg, Va., formed from that experience. It ranks as one of two teams from the industry’s DARPA days still intact. Waymo is the other. But where Google funded its self-driving car project following DARPA and established Waymo as its commercial descendant in December 2016, Fleming and Torc have been focused on making the business succeed from the outset.

While Google and others chased robotaxi applications, Torc earned defense contracts and deployed its self-driving systems in Iraq and Afghanistan. Later, the company deployed on Caterpillar mining trucks operating in Australia, and then made a short-lived foray into the self-driving shuttle space with Transdev, which ended as the pandemic hindered shared transportation.

Torc made enough money to survive, even as finances were tight enough that outfitting two Lexus test vehicles for a CES demonstration counted as substantial expenses. Fleming had little interest in following competitors in seeking venture capital.

“This industry continues to celebrate the massive amounts of capital raised,” he said. “I never view the capital raise as a means of celebration. I look at it as an obligation to fulfill to your investors, to do what you said you were going to do.”

Across the industry, he has watched such obligations and deployment timelines go unfulfilled. Especially in the area of robotaxis, where the premise remains simple but the reality of carrying passengers to any conceivable number of destinations has been technically vexing.

He saw a much stronger business case developing in the truck realm. Now, so do many competitors.

The trucking industry is the $800 billion underpinning of the U.S. economy, according to the American Trucking Associations, something the nation is recognizing during the pandemic, as the previously underappreciated role human-driven trucks play becomes more apparent amid port backups and supply chain logjams.

Buoyed by the promise of alleviating a national driver shortage and the promise of operational cost savings in a low-margin business, more than a dozen companies are now developing automated-driving technology for trucks.

Such trucks, hauling freight from one loading dock to another, could reduce the cost of trucking from $1.65 per mile to $1.30 per mile by the mid-2020s, according to a July study from financial data firm PitchBook. The study further projected the global market for autonomous trucking would rise from $528 million in 2023 to $166.8 billion by 2025.

“There’s a lot of hype around moving people around and disrupting the Ubers and Lyfts of the world, but I think the market for moving goods … you’re going to see much faster adoption of that,” said Asad Hussain, senior mobility analyst at PitchBook. “We’re going to be touched by that, frankly, a lot quicker than we are going to be ferried around ourselves by autonomous technology.”

In August, self-driving truck startup Gatik, which focuses on shorter, off-highway routes, removed the safety driver from two trucks operating on public roads in Bentonville, Ark., while commercially hauling goods for Walmart. Another well-funded player, TuSimple, intends to proceed with a “driver out” pilot project between Phoenix and Tucson in 2022. Embark Trucks has targeted 2024 for operations without safety drivers.

Fleming believes Torc will commercially deploy “within this decade.” Which is not to say he believes the competition will be far ahead.

“I believe Torc will be the first company — and these are key words — to build a profitable and scalable product,” he said. “And I know that’s kind of bold to make that statement.”

Accomplishing that requires constraining the scope of both the technical challenge and business ambition. He’s not pursuing robotaxis like competitors Waymo and Aurora, which are working in both the truck and taxi realms. He doesn’t envision Torc trucks on the road beyond the States like Plus and TuSimple, which are eyeing operations in both the U.S. and China. Even commercial operations in just the American Southwest would be sufficient for a while.

But in 2017, as his desire to target the commercial truck market grew, Fleming quickly came to believe one crucial roadblock existed. Torc could not get there alone.

At least in theory, the robotaxi business should be easy. Consumers hail a ride via an app. They go from point A to point B. Trucking, on the other hand, is more complicated.

“About the only thing most carriers have in common is you see them driving down the highway,” Culhane said. “Freight is a massively fragmented industry. The way they do business, the types of stuff they carry, the way they route their networks. Everything is variable.”

Fleming and Culhane began searching for a partner with that foundational knowledge in place. In March 2019, Daimler Trucks became a majority shareholder in Torc. Much like General Motors and Cruise, Torc operates independently from the German automaker. But its future is tied to access to Daimler’s customers.

Daimler and Torc are engaging with fleet executives to understand how their mechanics can be trained and certified to calibrate sensors. They’re recognizing what data can be extracted to perform predictive maintenance, and considering how to best design hardware so it can be repaired faster at dealerships. Perhaps most importantly, Daimler and Torc are working together to reinvent the Cascadia chassis from the ground up.

“Trying to do a retrofit solution, you’re not going to get that level of chassis control you need,” Culhane said. “So the OEM partnership is very critical in this space.”

Working together, they can better answer two crucial questions: How can they build trucks and hardware that last for more than a million miles on the road, and how can they best equip trucks to handle 20 to 23 hours of nonstop driving?

The latter ranks as a particularly ambitious target, but one that’s plausible because of Daimler Trucks’ concurrent work in hydrogen fuel cells. Daimler has been bullish on fuel cells for powering freight movement, rather than battery-electric vehicles that require frequent charging.

But the benefits of such long routes potentially cascade atop each other. Consumers get goods faster. Trucks can ply their routes through the night, thus reducing congestion during the day. Nocturnal travel could allow for slower speeds, which offer fuel savings on top of the 10 to 13 percent fuel-consumption reductions many estimate self-driving trucks will achieve.

Tests are underway. It might be a long time before a self-driving system can be married with hydrogen fuel cell technology to unlock such lengthy routes. Regulations that limit hours of service would need to be revamped. Infrastructure needs to be built. The technical challenges of autonomy itself make for an arduous journey to the self-driving future.

Torc, in business for 15 years, is ready for the long haul.

“This is not an overnight thing,” Culhane said. “It’s a lot of hard work that takes this from a great demo to an actual product, and from that, to scalability and sustainability. You have to be able to stay on that road for a long time.”