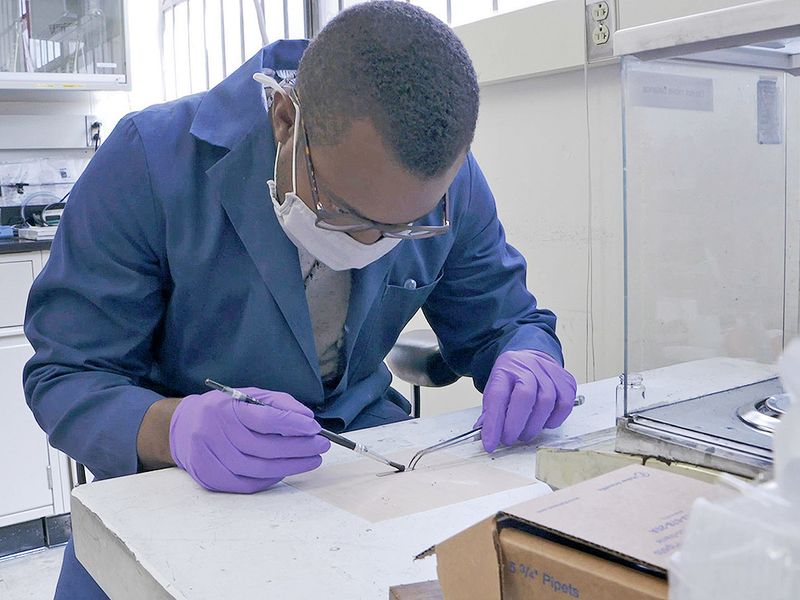 Fueled with hydrogen instead of diesel, electrically powered Class 8 trucks could offer a much cleaner way to move freight.

But first, America’s national labs must light a development path toward more efficient and durable “heavy-duty” fuel cells. Many experts believe using these to energize massive electric motors could easily and affordably move tons of cargo, almost like road-going locomotives. And recently, a $100 million funding bet was laid to put this commercialization effort on the rails.

Half the money will go toward a fuel cell research initiative called the Million Mile Fuel Cell Truck. This is a new U.S. Department of Energy-funded consortium of five main national labs and three affiliate labs working on “pre-competitive” ways to solve the cell durability and efficiency challenges for heavy-duty uses. This consortium coordinates the lab work, provides expert oversight and stirs that together with individual activity from private industry developers and advanced academic projects.

A fuel cell uses a supply of hydrogen gas and oxygen to make electricity, water and heat. Fuel cell efficiency — the percentage of the potential energy that gets converted to useful work — is generally 40 to 60 percent. But projected breakthroughs could drive that to 72 percent. Further lab work is also required to stretch cell durability.

After decades of R&D for light-duty vehicles such as cars and crossovers, where the focus was on low cell cost, it’s trucking’s turn to get green and clean.

As a critical secondary part of this effort, the DOE is also funding a $50 million, five-year national lab-based consortium to develop large-scale, efficient, hydrogen-generating electrolyzers us- ing renewable energy sources, such as solar, wind, wave or geothermal. Electrolysis is the process of splitting water into hydrogen and oxygen. Currently, only 5 percent of commercial hydrogen is generated through electrolysis; 95 percent comes from natural gas, oil and coal using steam reformation.

Q: How important is the fueling infrastructure to run Class 8 trucks on hydrogen?

A: If you’re going to have trucks and cars on the road, you’ve got to have an infrastructure for supplying hydrogen. You’re aware that Hyundai and Toyota are selling a car, and Honda used to sell a hydrogen-powered car. And the word that we’re getting back is that they are good cars. But people are frustrated with the lack of infrastructure. And half the time, apparently, the hydrogen refilling stations are down. But [Class 8] trucks tend to run the same route, so you can have a more limited infrastructure and still support that industry.

A: When you’re talking trucks, efficiency becomes the game. We’re trying to change the fuel cell focus for light-duty applications where cost is the driver — initial capital cost. In heavy-duty trucks, efficiency, total cost of ownership and durability are really the game. It’s increasing the durability up to 30,000 hours, which gets you up to a million miles over the road. And it’s increasing their efficiency. Five thousand hours in a light-duty application gets you up to approximately 150,000 miles.

Q: What’s the most important reason to move from diesel to fuel cells for freight-hauling trucks?

A: There’s pollutant emissions, hydro-carbons, soot, CO and NOx, and the government has regulated those emissions for some time. Hydrogen is zero emissions. That’s only a small piece of the game. Energy security is another piece of the game. But if you move to something like hydrogen, it can be made much more easily from renewable sources. Of course, there’s economic competitiveness. It must work economically. But when you talk about how you’re going to decarbonize the grid, the industrial sector and transportation, hydrogen is really one of the few ways that can decarbonize all three sectors at once. That really is a huge primary driver: greenhouse gas efficiency.

Q: What is the cost and the power output of a hydrogen powertrain for a Class 8?

A: The right thing to do is look at our targets. That’s $60 a kilowatt. So we are modeling our systems at 275 kilowatts (about 368 hp). And one of the advantages of electric vehicles is they provide full torque at zero speed.