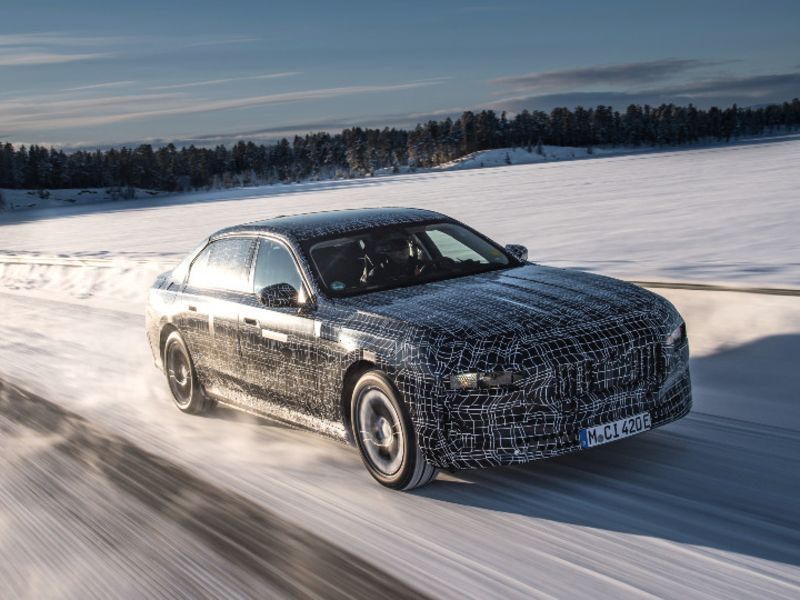 BMW has teased its new i7 full-electric sedan with pictures of the car undergoing winter testing in Arjeplog, northern Sweden.

When it launches next year, the i7 will be a rival to the Mercedes EQS, Tesla Model S and vehicles from newcomers such Lucid.

The sedan will be the battery-electric version of BMW’s new-generation 7-series, which is also due next year. The i7 will use the same 5th generation eDrive electric drivetrain as the iX electric SUV.

An i7 with the iX powertrain would give the sedan 516 hp and a battery size of 105 kilowatt hours. It likely would have a longer range than the iX’s 507 km (315 miles) because of the i7’s more aerodynamic profile.

BMW has promised full-electric versions for every model segment. “By 2023 we will offer our customers at least one BEV option in nearly all our vehicle segments,” CEO Oliver Zipse told analysts on earnings call in August. He said BMW aims to build around 10 million EVs over the next 10 years.

The i7 is one of four new electric vehicles BMW plans to launch in the next two years.

An electric version of the X1 compact SUV will also arrive next year, with electric additions to the 5-Series large sedan and the Mini Countryman compact SUV both due in 2023.

BMW recently also launched the i4, a rival to the Porsche Taycan and Tesla Model 3.

By the end of 2025, the company expects to have delivered about 2 million full-electric vehicles to customers, with a share of at least 25 percent of total sales by 2025, rising to 10 million and at least half of global deliveries by 2030.

The i7 will be built at BMW’s plant in Dingolfing, Germany, where the 7 Series and iX are produced.