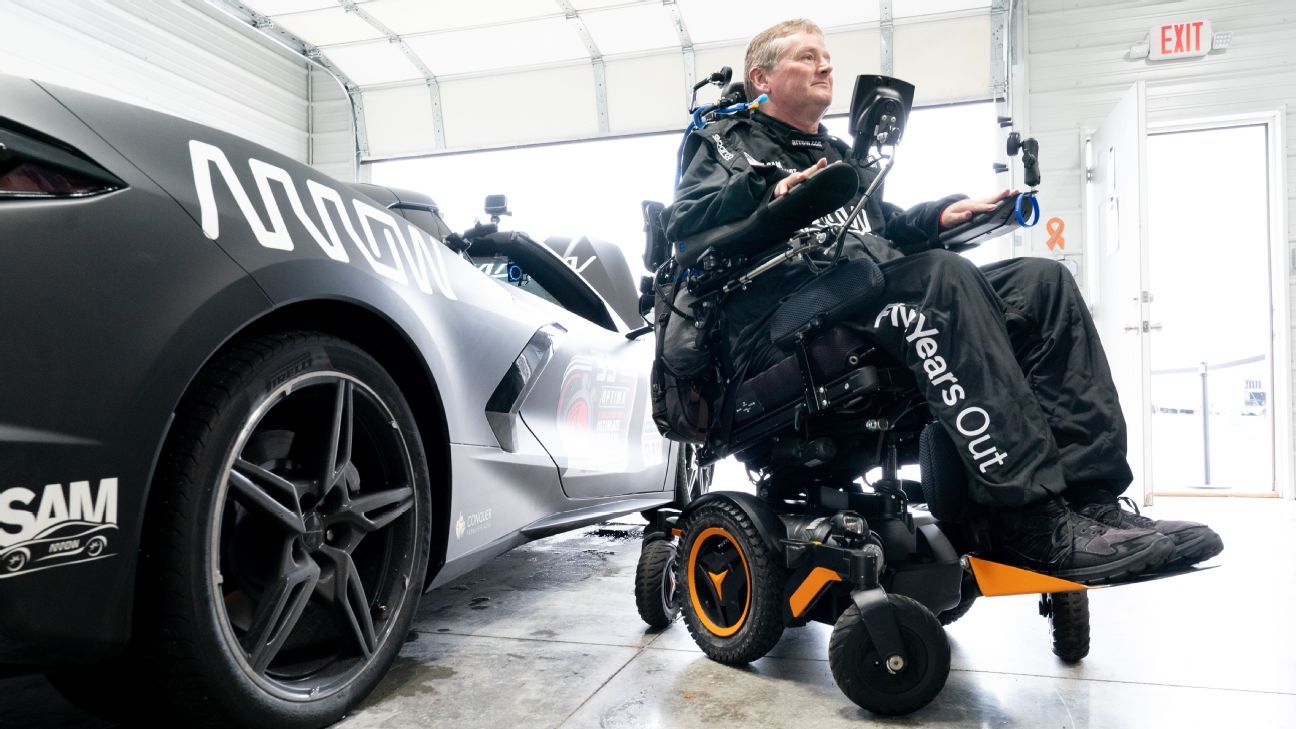 SAM SCHMIDT had to wait seventeen years to drive his wife to a date.

He wasn’t even meant to be alive at that point, not after what happened to him back in January 2000.

Back then, Schmidt was a racing driver, doing what he loved the most, preparing for a new Indy Racing League season. His goal that year was to win the Indy 500.

Then, one day, his life changed forever. It was during a routine lap of a routine test at Walt Disney World Speedway in Orlando when it happened. In a flash, he lost control of the car and he hit a concrete wall at 180 mph.

The impact severely injured his spinal cord, leaving Schmidt a quadriplegic. When his wife Sheila arrived at the hospital after a red eye flight from their home in Nevada, the best case scenario presented to her was grim. Schmidt was lucky to survive the night. If he was still alive at the end of the week, she should look for a nursing home for her husband as he would be on a ventilator for the rest of his life.

Schmidt’s life since has been all about defying expectations. He left the hospital six weeks later. He returned to the Indy paddock and founded his own team a year later.

Then, he discovered a way he might be able to get back behind the wheel. It was beyond anything he had thought was possible.

“In 2000 they didn’t give me a week, let alone 21 years to live,” Schmidt told ESPN. “At that point it was all about survival and just day by day.

Not only did Schmidt drive again, he raced competitively again.

The premise of the car that made it all possible is as audacious as the idea of Schmidt’s survival must have seemed back in that hospital room in 2000.

It was the culmination of several years’ work with American company Arrow Electronics, who set themselves the goal of creating a car for a person unable to use their arms or legs.

The final product — called the semi-autonomous mobility (SAM) car — was a modified 2014 Corvette Stingray. It is controlled like no other car in the world.

Schmidt wears sunglasses fitted with motion-tracking sensors, which link up with cameras mounted on the dashboard to steer the car based on how he moves his head from side to side. He exhales to accelerate and inhales to decelerate, using a small sensor that looks like a straw. It even has built-in technology to detect and ignore Schmidt sneezing.

“When you’re driving now you have to make a conscious effort what you’re doing. You can be going on the straightaway and then suddenly you blow in and the thing is going to flat stop on a dime, it’s not what you want to do. It’s got really good brakes even if you don’t want them.”

Schmidt has a co-pilot in the car with him at all times who can take over controls using a conventional steering wheel, if needed. That was key for Schmidt’s hopes of returning to competitive racing.

Schmidt drove for the first time in 2014 at the Indianapolis Motor Speedway, the place he had dreamt of winning at for so long. As he got better and more used to the SAM car in different demo runs, he started to compete.

In 2016, he took on the intimidating Pike Peaks challenge — 156 turns over 12.42 miles. Schmidt’s SAM car finished six minutes behind the winner in a conventional car.

Like any racing driver, Schmidt could only think about how to keep making the car better.

“We’re starting to get into competitions against able-bodied folks. I just want to go faster and move up that chain and try and beat more people. That’s part of me.”

While competing is one thing, the SAM car and the partnership with Arrow have opened up a whole new world to him. Schmidt made headlines worldwide when he was able to walk his daughter down the aisle using an “exoskeleton” suit, also built by Arrow.

He’s called that the best day of his life since the accident.

Driving his wife to that date is up there, too. He took Sheila out in San Francisco in 2017. He’s also driven with his son, Spencer, in the co-pilot seat.

“All of these things that were taken for granted 21 years ago, we’ve been able to tick those boxes,” Schmidt said.

While it’s easy to dismiss those things as fairly routine to do, for Schmidt, it was everything. The SAM car is special beyond just something to scratch his racing itch. It’s done something much more important than that – it’s given back some of the independence Schmidt lost with his injury.

“I think I anticipated the pure emotion and excitement and anxiety [of driving] but what I did not anticipate was the normalcy and the feeling of being in control, because up to that point I don’t really control anything in my life except from my power wheelchair.

“I’m steering and I’m gas, I’m on it. There’s nothing else in my life that I do that I have that kind of control. It just makes me feel normal for that time I’m in the car.”

It’s a feeling of control and freedom Schmidt wants others to experience. His current dream — one shared by Arrow — is rolling out the technology to the general public.

“Not often do you see a $30 billion tech company with that moral compass and that willingness to just to do stuff to help people. It’s really quite extraordinary, out of the ordinary.

“That’s why I’ve been all-in for seven years. When you apply [the technology] to people with disabilities it can be life changing and it can save lives, we’ve seen it happen.”

He added: “In the U.S. there’s an incredibly negative statistic of 20 veterans a day committing suicide. You’re never going to be able to curb entirely all of that but I think a lot of those men and women joined the Armed Forces for a reason and now they’re permanently disabled and they can’t go to work, they can’t put food on the table.

“You’ve got to give them a vision and give them a way to achieve their goals. I think it can take it out of that depression. We’re working with Arrow to do those kind of projects and take away barriers – is it transportation, is it mobility? Let’s take that barrier away and get you back into life.”

Schmidt has lofty ambitions in racing too. The Arrow partnership has extended to Schmidt’s IndyCar team, which has recently become Arrow McLaren SP, having linked up with the famous British manufacturer.

Now that old dream of Schmidt’s — that one day he might win the Indy 500 — seems as real as ever.

“It’s funny because originally I thought maybe I shouldn’t be around the paddock because I’d remind drivers of what is possible.

“I think if you would talk to them… I’ve been around the paddock for 21 years and I don’t think they even recognise me as a disabled person. They treat me as just another team owner and I’m there to win. That’s first and foremost.

The new targets Schmidt is setting himself and Arrow to achieve on and off the track sound ambitious, but given the way his life has gone to this point, it is very difficult to bet against him.