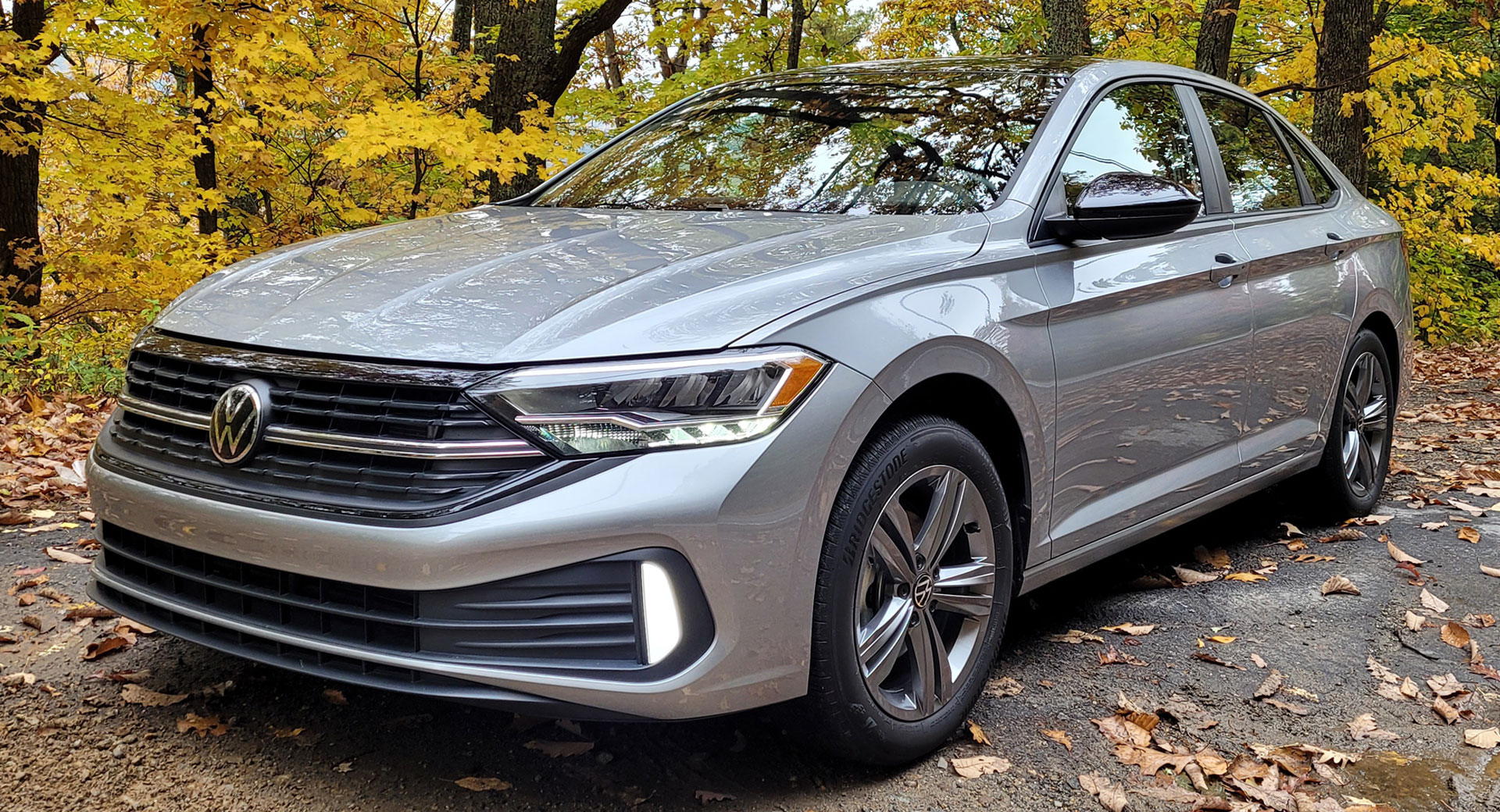 In October, the average transaction price of a new vehicle hit a record of $46,036. That’s more than many people can swing, but there are still plenty of affordable options out there.

One of them is the 2022 Volkswagen Jetta, which receives a minor facelift as well as a new engine and updated technology. Despite these improvements, the model starts at a reasonable $20,195 and climbs to $30,995 for the GLI variant.

We recently took a spin in the facelifted sedans and while the updates aren’t game changing, they’re welcome additions. 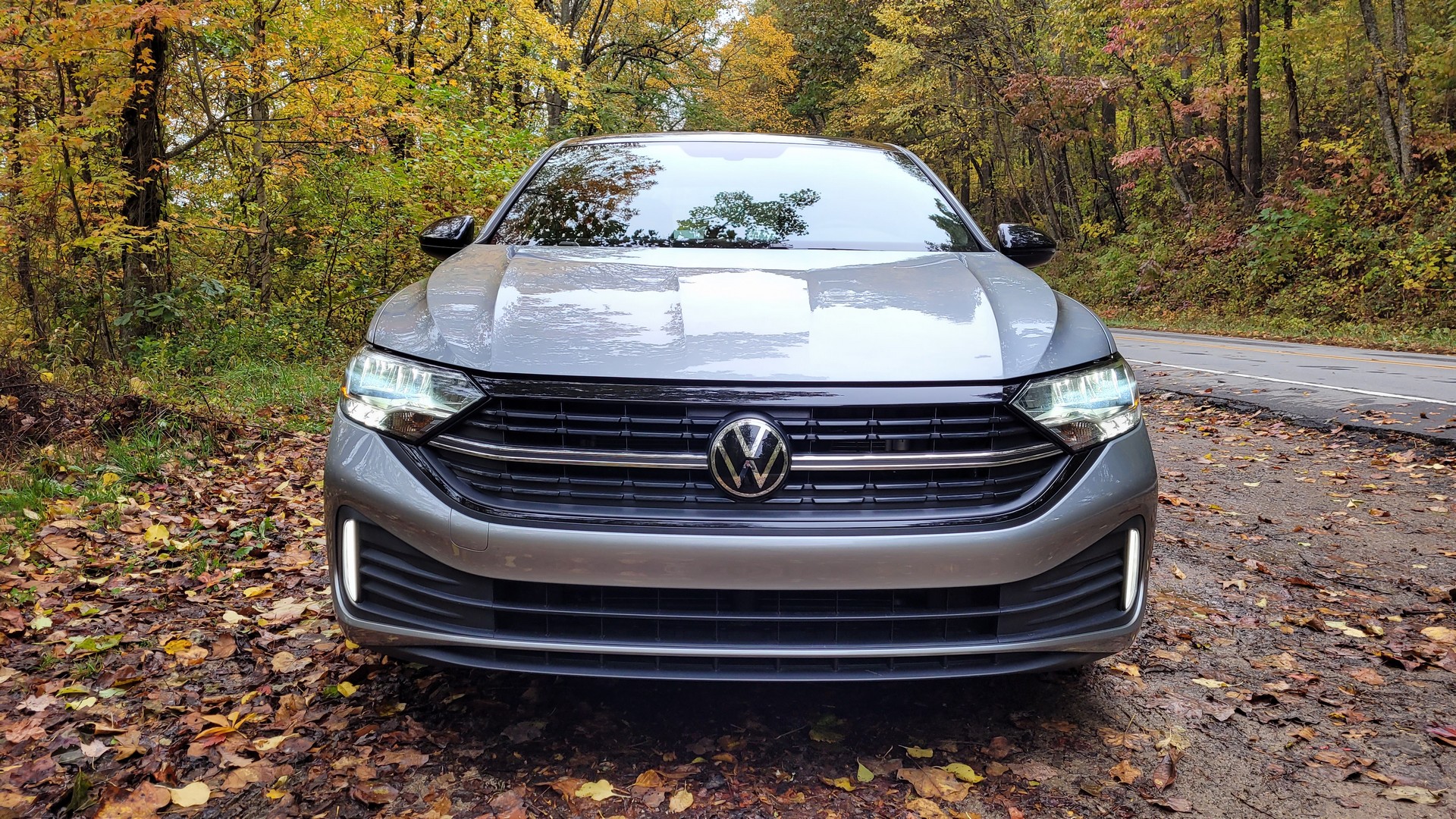 While the sixth-generation Jetta had a forgettable design, the seventh-generation sedan adopted a sportier and more upscale look. The facelifted model builds on that by adding a new front bumper with a more expressive intake. It’s joined by a new single bar grille, vertical accent lights, and an updated rear bumper.

The GLI, on the other hand, looks like a toddler who found mom’s lipstick as red accents can be found on the grille and air curtains. It’s a bit much, but the other upgrades are more palatable as the performance model is distinguished by honeycomb mesh intakes, black window surrounds, and larger 18-inch alloy wheels. Other highlights include sportier bumpers, unique side skirts, and a wider dual exhaust system with “improved acoustics.”

A Classier Cabin With Additional Tech 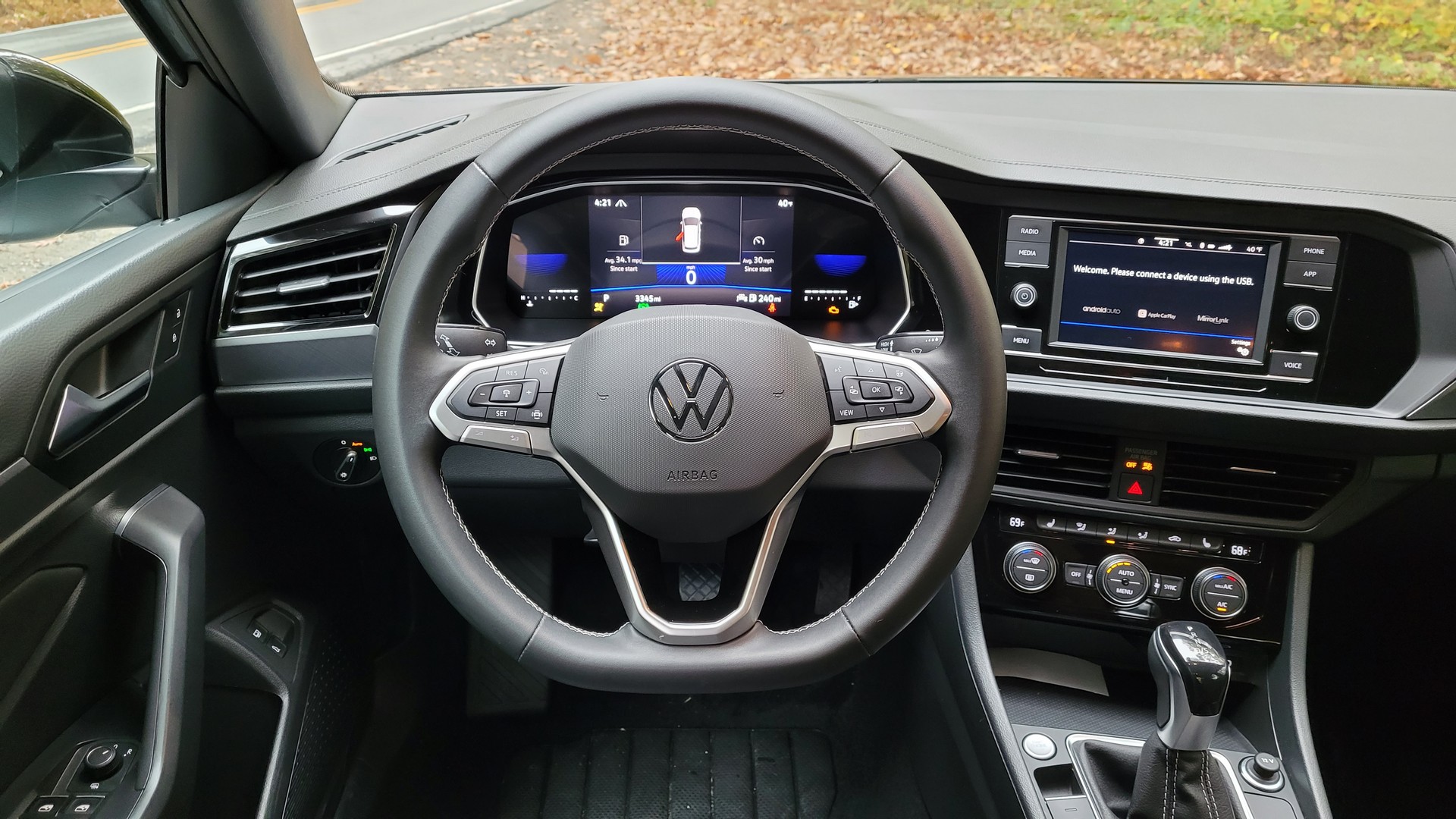 More meaningful changes occur inside as the 2022 Jetta comes with a newly standard 8-inch digital instrument cluster. It’s a nice addition, but the cluster is fairly basic and doesn’t feel like it’s utilized to its full potential.

While that’s disappointing, the SEL and GLI trims have a larger and more advanced 10.25-inch Digital Cockpit Pro display. It provides more customization and settings, including a full-screen map view on models equipped with navigation.

Putting the screens aside, the entry-level model adopts new cloth seats with a rhombus pattern. They’re joined by a new steering wheel and leatherette door panel inserts, which help to make the cabin feel a bit more premium. 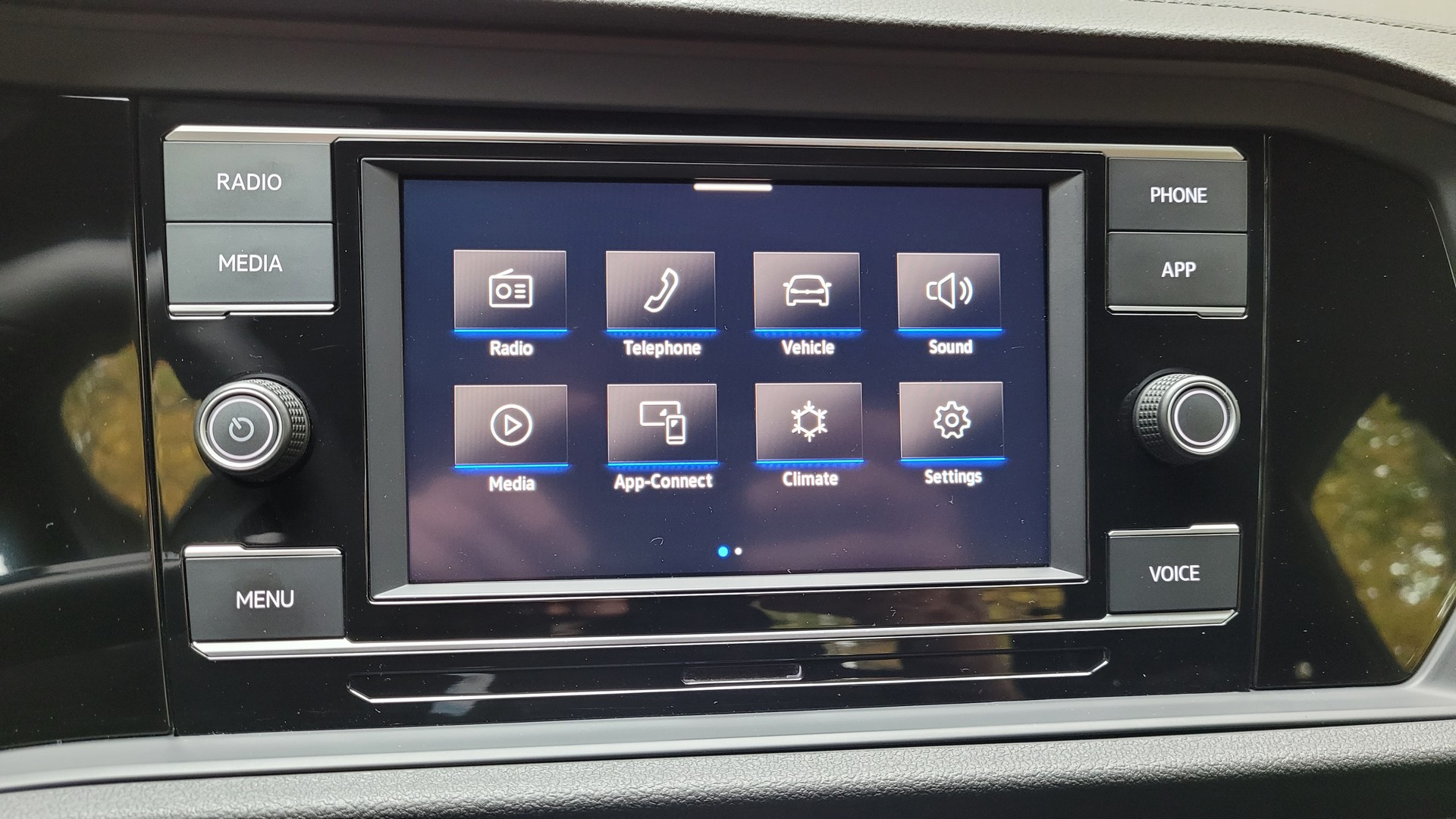 Elsewhere, there are familiar infotainment systems. This means mainstream variants have a 6.5-inch MIB2 system, while the Jetta SEL and GLI have a more advanced MIB3 system with an 8-inch display.

Since the interior changes are relatively minor, drivers will find a familiar cockpit with plenty of physical controls and nicely grained plastics. It’s not the most exciting environment, but the cabin feels relatively modern and welcoming.

That’s especially true in the range-topping GLI, which comes nicely equipped with perforated leather seats that feature heating and ventilation up front. Other highlights include grey woodgrain trim, red accents, and a leather-wrapped sport steering wheel.

They’re joined by a ten-color ambient lighting system, illuminated scuff plates, and stainless steel pedals. Rounding out the highlights are a wireless smartphone charger and a nine-speaker Beats audio system with a subwoofer. 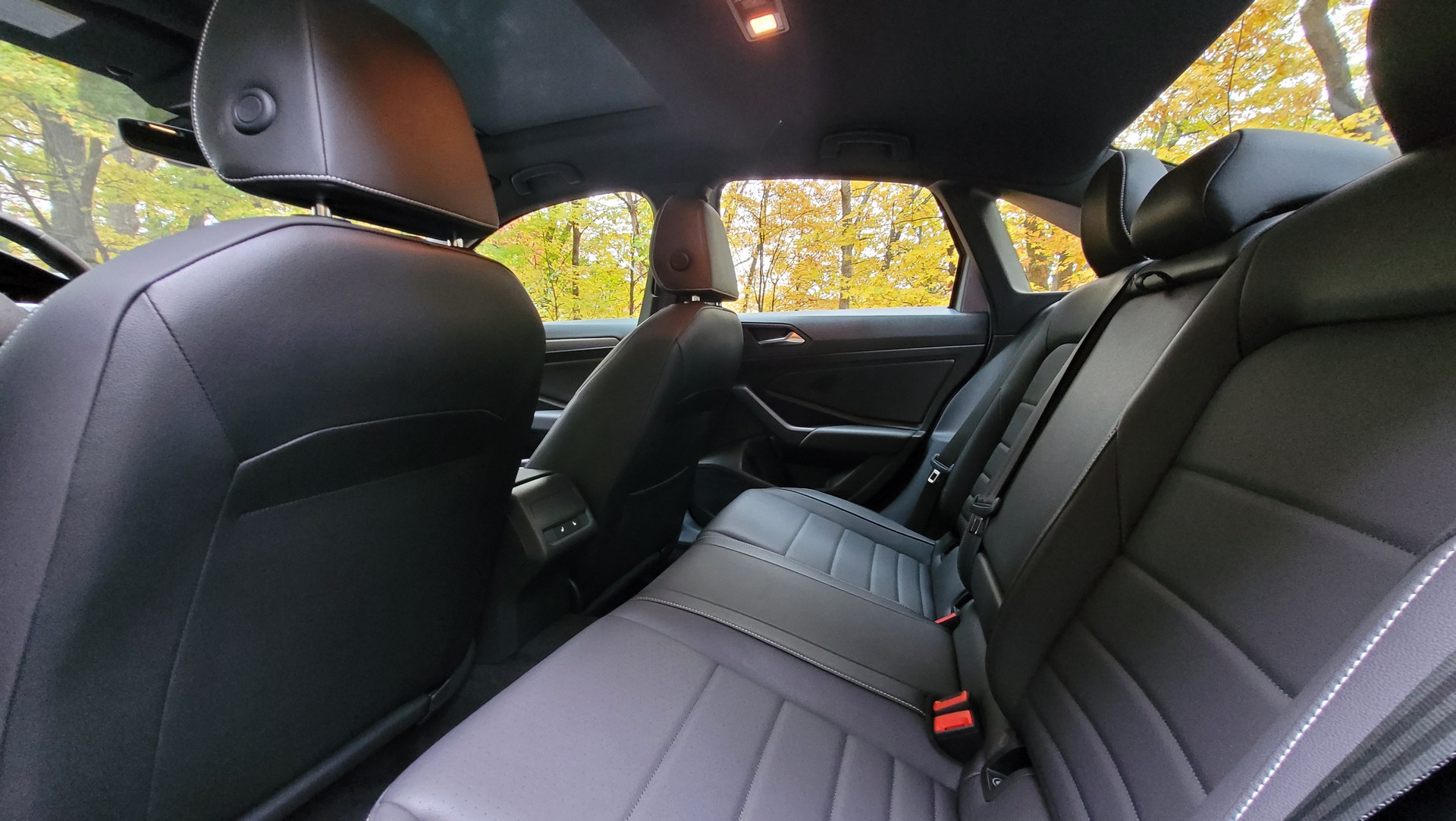 Regardless of which trim is selected, all Jettas offer a roomy interior for families on the go. There’s plenty of head- and legroom up front, while the backseats offer a generous 37.4 inches (950 mm) of legroom. That matches the redesigned Honda Civic and is 2.6 inches (66 mm) more than you’ll find in the Toyota Corolla.

Speaking of space, the Jetta offers an accommodating trunk with 14.1 cubic feet (399 liters) of luggage room. That bests the Corolla and is slightly less than the Civic, but you can always fold down the rear seats if you need extra room. 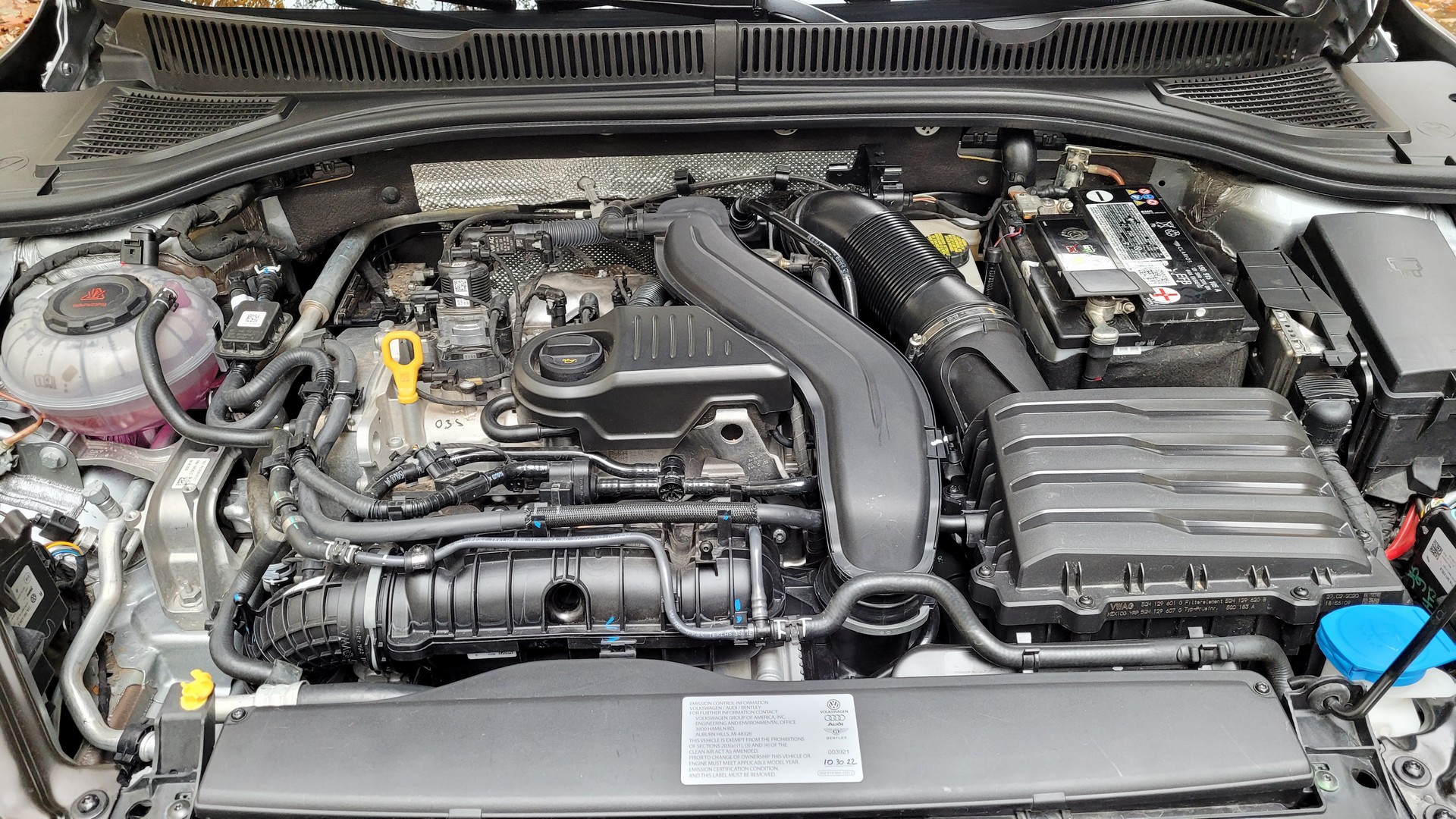 While the styling and equipment changes are minor, one of the biggest updates is hiding under the hood. Opening it reveals an all-new turbocharged 1.5-liter four-cylinder engine, which is shared with the Taos.

Besides being more powerful and fuel efficient, the engine seems a bit more refined than its predecessor. While it’s hard to be certain without a back-to-back comparison, the new EA211 unit is a smooth operator that offers more power than the Corolla and significantly more torque than the Civic. 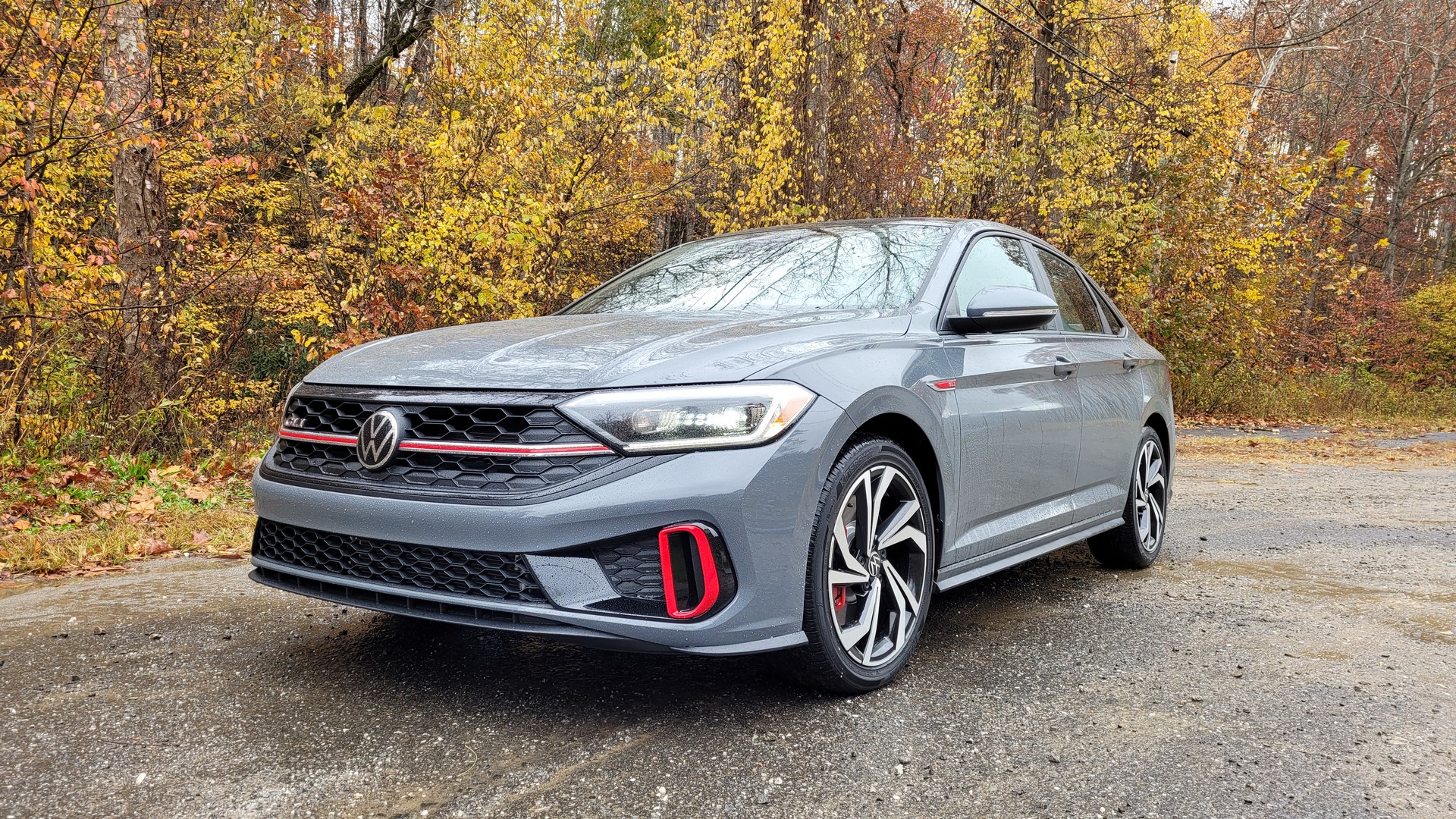 The GLI comes standard with a six-speed manual, although a seven-speed DSG gearbox is also available. Both carryover and the automatic enables the car to have an EPA-estimated fuel economy rating of 26 mpg city, 36 mpg highway, and 30 mpg combined.

There’s a lot to like about the GLI’s engine, but everything isn’t perfect as it drones on the highway while in Sport mode. If that’s the “improved acoustics” Volkswagen is talking about, we’ll pass, but it’s easy to change modes for a more comfortable experience.

The Comfy Cruiser With A Sportier Sibling 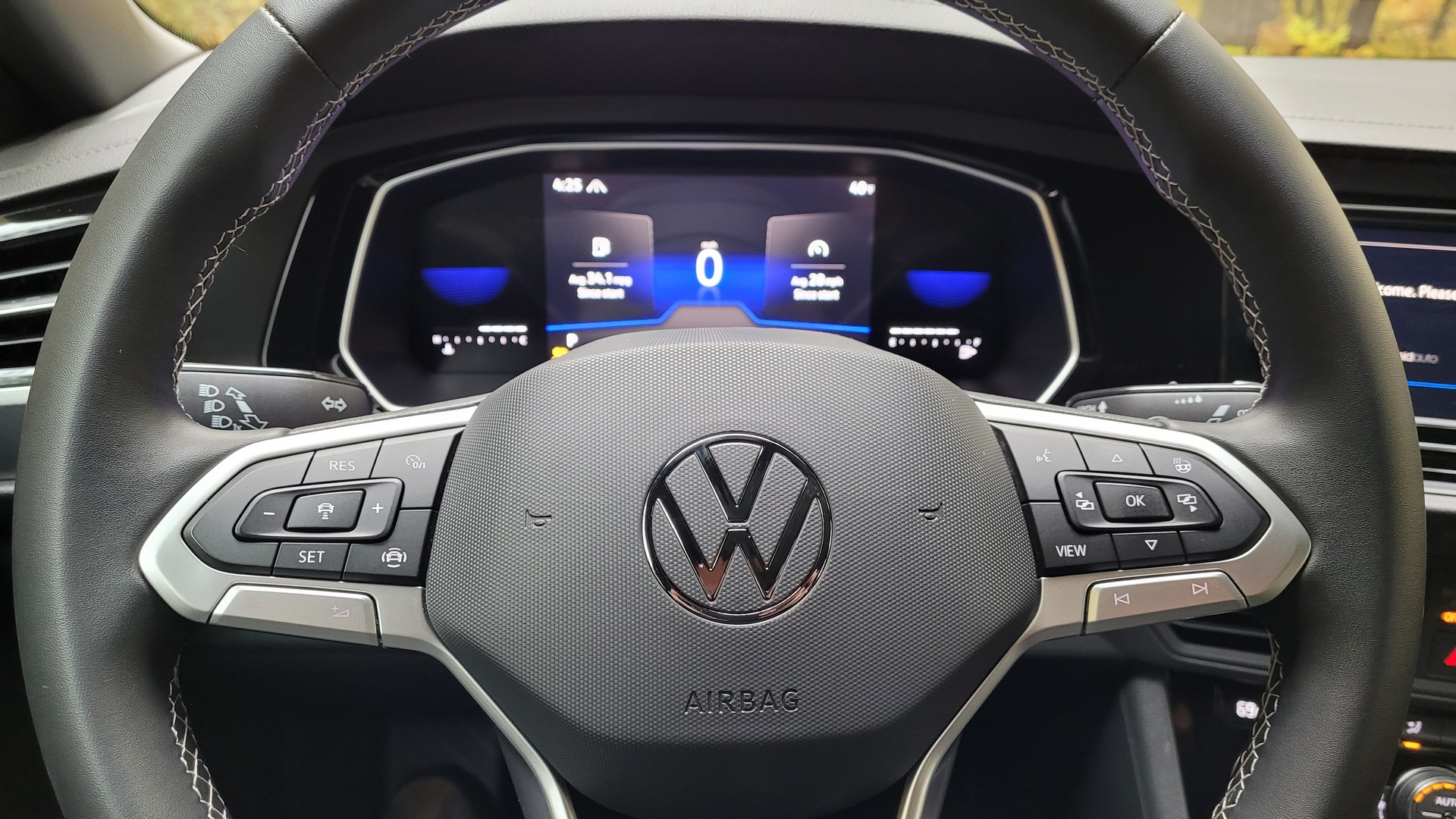 While the rest of the car gets a handful of updates, the chassis and suspension carries over. As a result, the standard model is still geared towards comfort and it largely achieves this goal as the ride is smooth and mostly settled. A few impacts made themselves known, but this was only a minor distraction and could be a result of the relatively basic torsion beam rear setup.

The steering isn’t particularly engaging as it’s light and a bit numb. Making matters even worse is the fact that only the Jetta GLI and SEL have four selectable drive modes – Comfort, Eco, Sport and Custom – so there isn’t anything you can do to improve the steering on mainstream variants.

Handling is also nothing to write home about as the model is capable, but the experience isn’t very rewarding.  Of course, that probably shouldn’t be too surprising given the car’s focus on value and comfort. 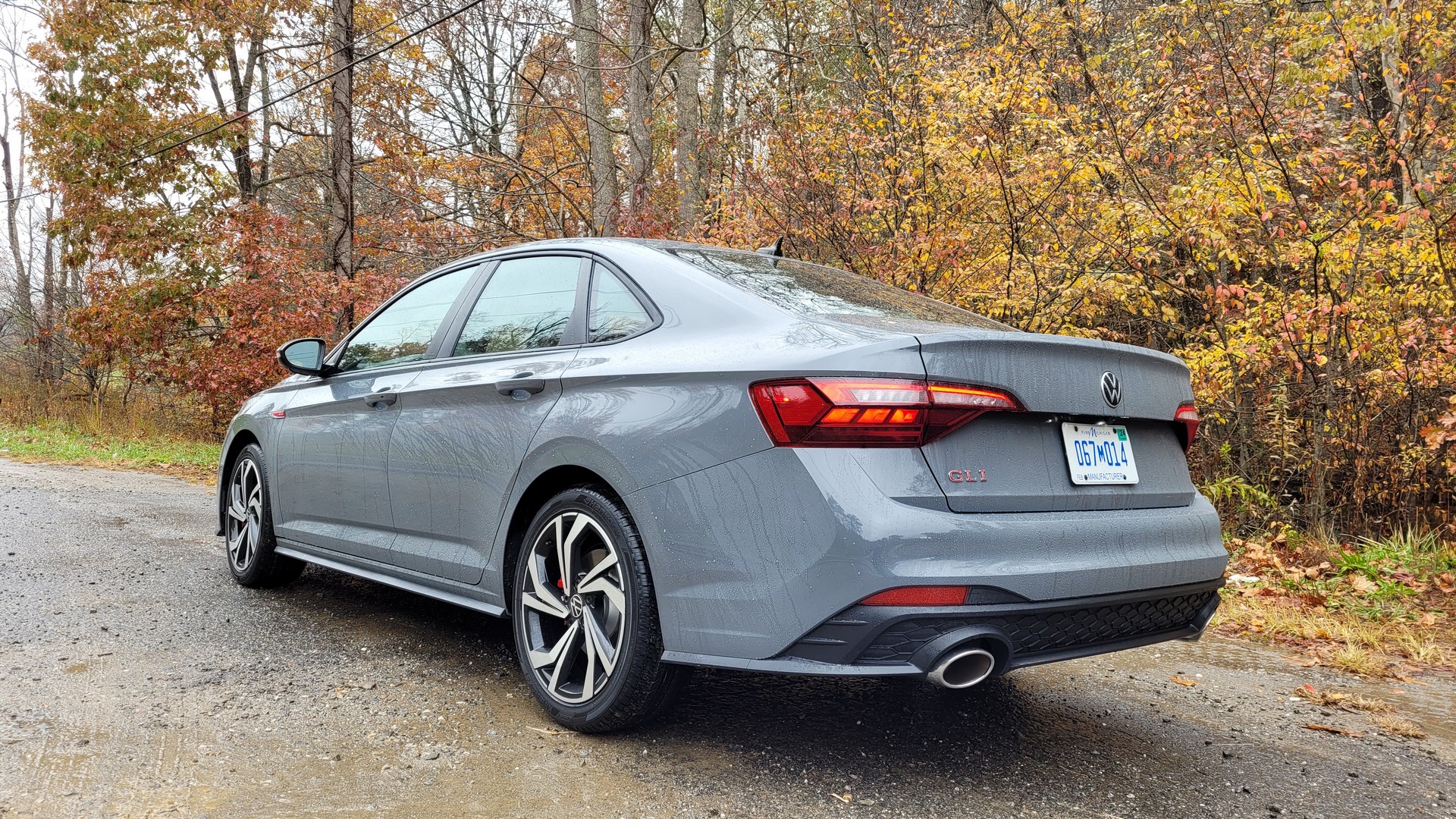 Thankfully, the Jetta GLI is a delight as it features a multi-link rear suspension, a rear anti-roll bar, stiffer springs, and sport-tuned shocks. That’s just the tip of the iceberg as the model also has a reduced ride height, an XDS differential system and more responsive steering. Volkswagen also throws in adaptive dampers, a limited-slip differential, and an upgraded braking system with components from the previous Golf R.

Thanks to the GLI’s unique features, it’s a far better driver’s car. It checks all the boxes with good handling, more responsive and better weighted steering, and a ride that is sportier but still perfectly comfortable. 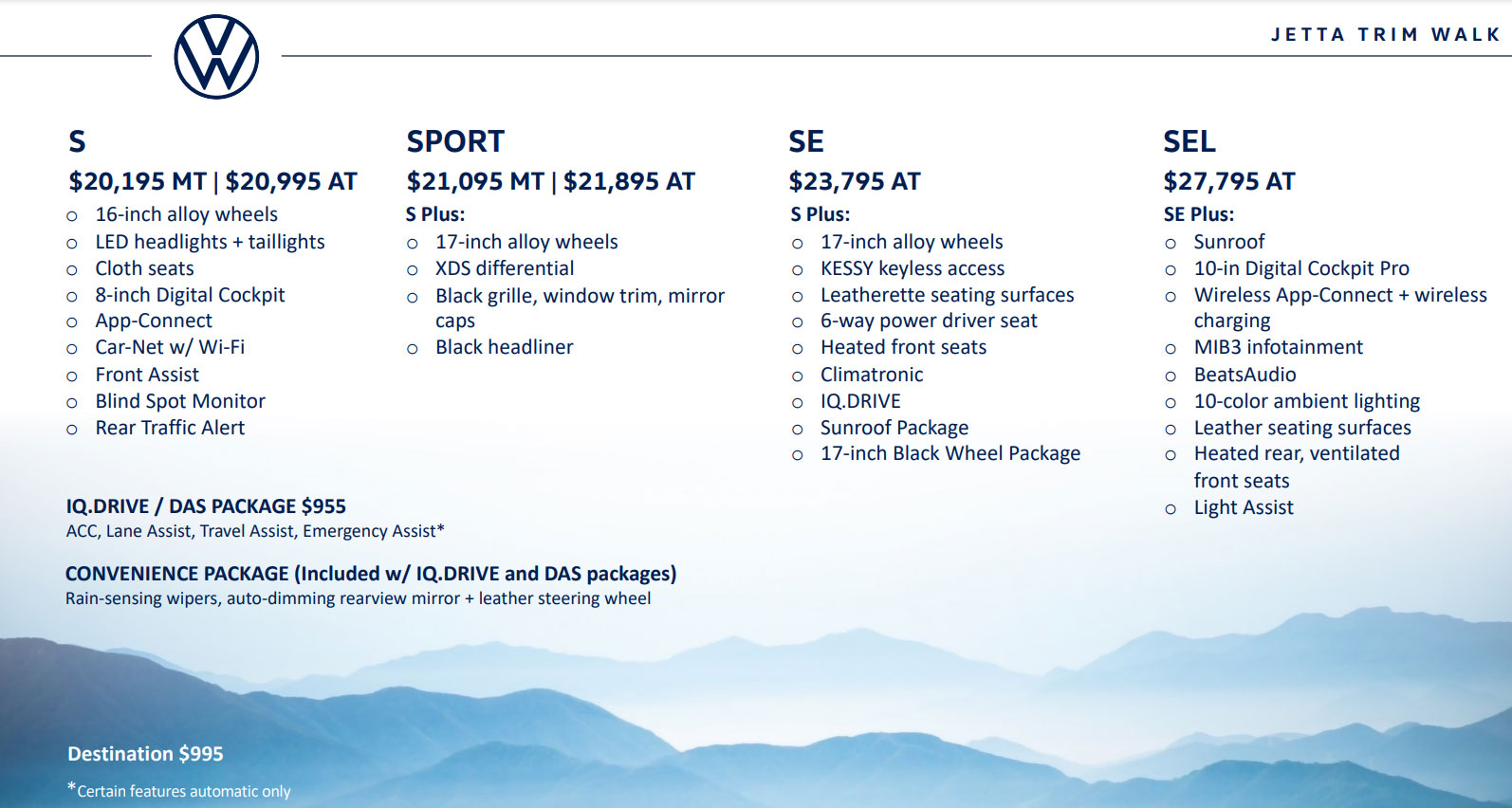 While the entry-model is sparsely equipped, customers can get an IQ.Drive package for $955 on models equipped with the $800 automatic gearbox. It includes adaptive cruise control, front assist, a blind spot monitor, rear traffic alert, lane assist, travel assist and emergency assist. Drivers who prefer to shift for themselves can get a similar Driver Assistance package for the same price, but it lacks emergency assist. 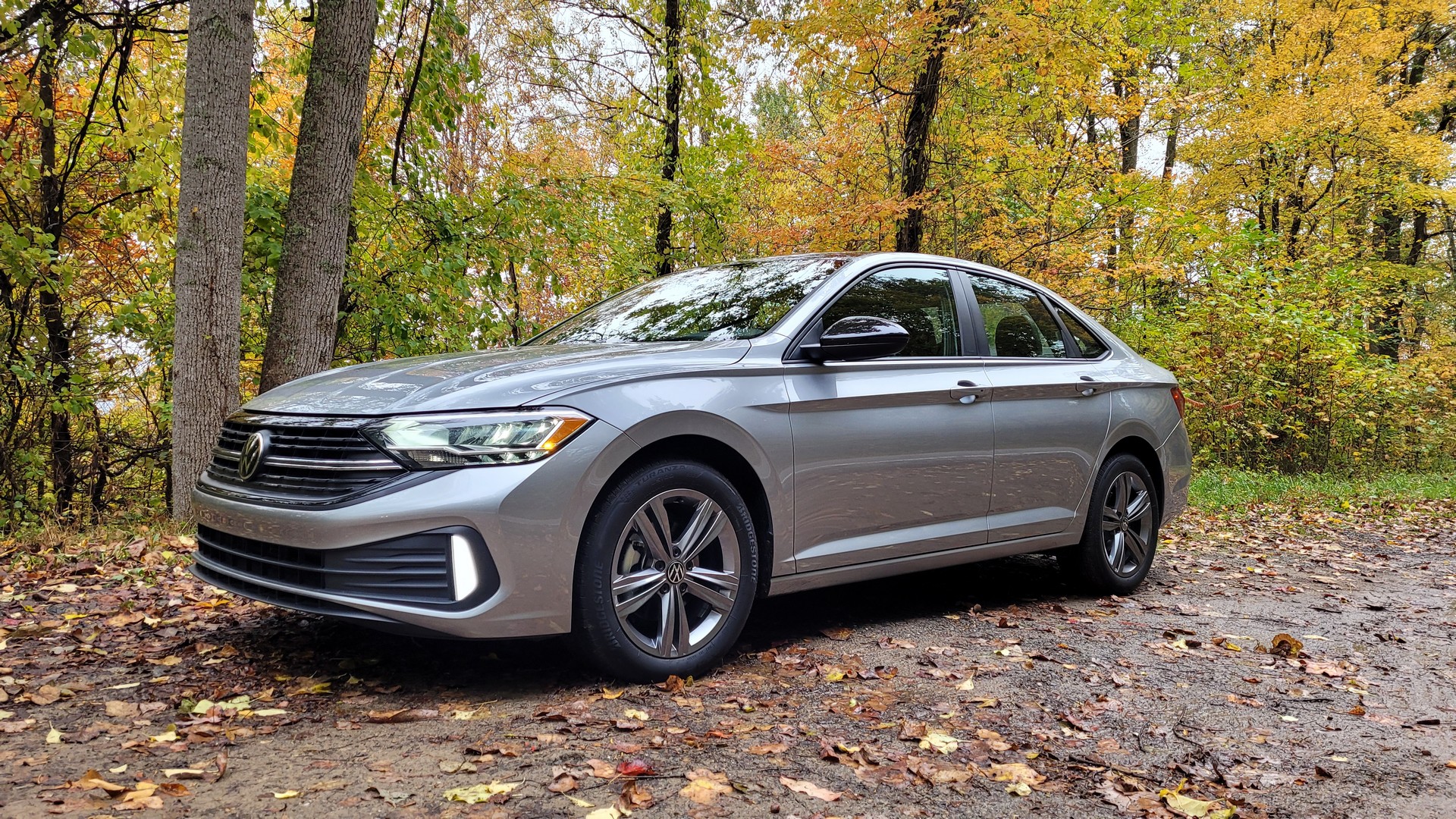 One step up is the all-new Jetta Sport, which begins at $21,095. It builds on the S by adding black exterior accents and larger 17-inch wheels. The model also comes equipped with sport seats, a stiffer suspension, and the XDS differential system.

Moving up the trim ladder are the automatic-only SE and SEL, which begin at $23,795 and $27,795. The latter features a leather-wrapped heated steering wheel, an eight-way power driver’s seat, heated / ventilated front seats, heated rear seats, and leather upholstery. The model also has a dual-zone automatic climate control system, a keyless entry system, a remote starter, and an auto-dimming rearview mirror. They’re joined by a wireless smartphone charger, an ambient lighting system as well as an upgraded digital instrument cluster and infotainment system.

Lastly, there’s the Jetta GLI which is available exclusively in well-equipped Autobahn trim. It starts at $30,995 and climbs to $31,795 when equipped with the DSG gearbox. The model comes with all the equipment mentioned earlier and this results in a sporty sedan that is relatively upscale.

A Better Jetta, But The Standard Model Is A Bit Dull 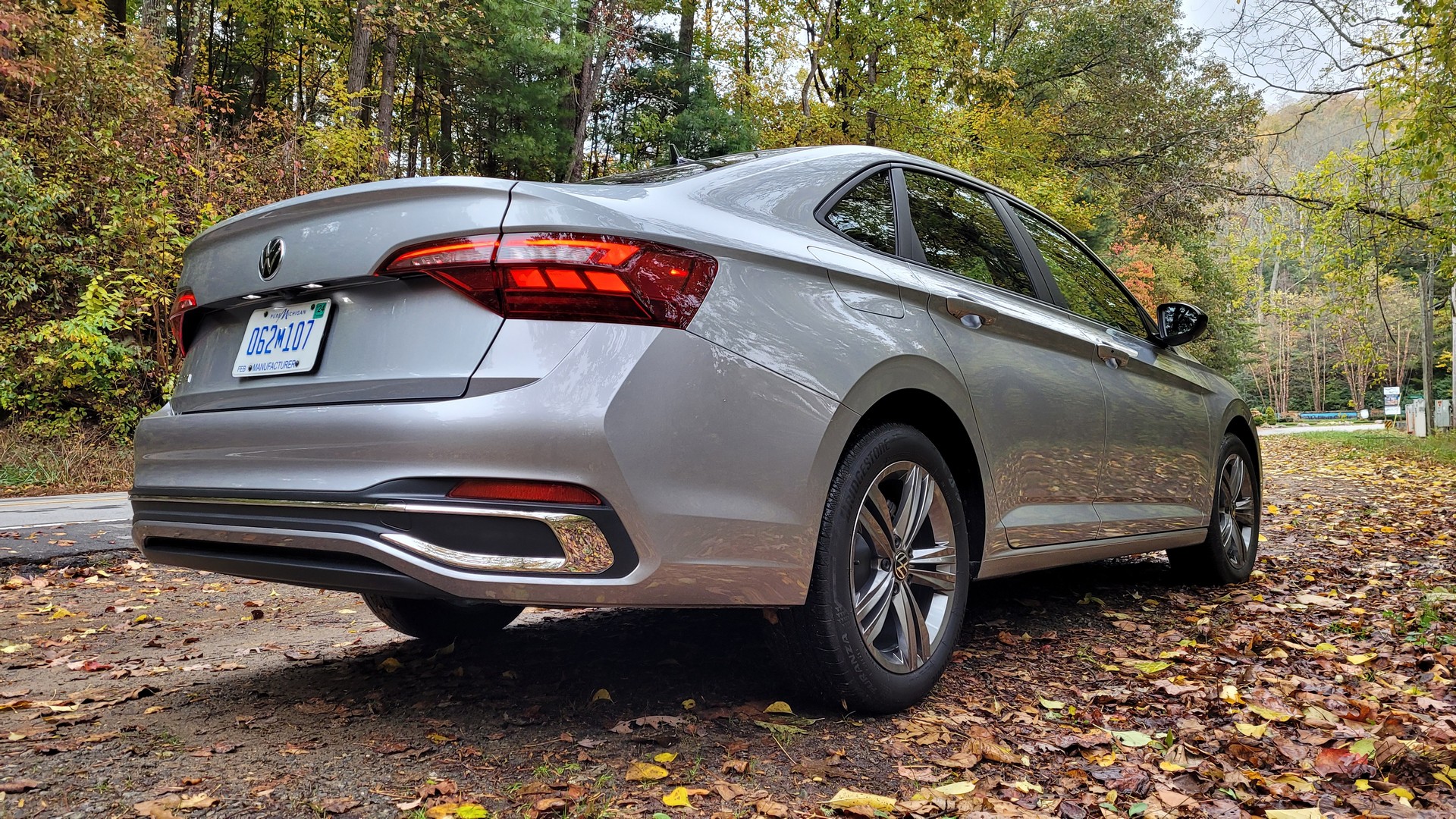 While the Jetta isn’t the most exciting car on the market, it’s an affordable option that receives a handful of upgrades for the 2022 model year.

The most important is an all-new turbocharged 1.5-liter four-cylinder engine, which is more powerful and fuel-efficient than its predecessor. Throw in some styling upgrades and additional equipment, and the sedan makes an even better impression.

However, those upgrades come at a cost as the 2022 Jetta is $1,200 more expensive than last year’s model. That’s a significant increase, but pricing is still competitive as the sedan is cheaper than the Civic and only a little more than the Corolla.

That’s not bad for a spacious sedan and customers can always upgrade to the Jetta GLI if they’re looking for something sportier. Unfortunately, that particular model sees a $4,650 price jump thanks to the elimination of the value-focused S trim.  That’s unfortunate, but the Jetta Sport is an interesting alternative for shoppers on a budget.

At the end of the day, the 2022 Jetta is a bit more powerful, a bit more stylish and a bit more expensive.  The GLI, on the other hand, is as great as ever.