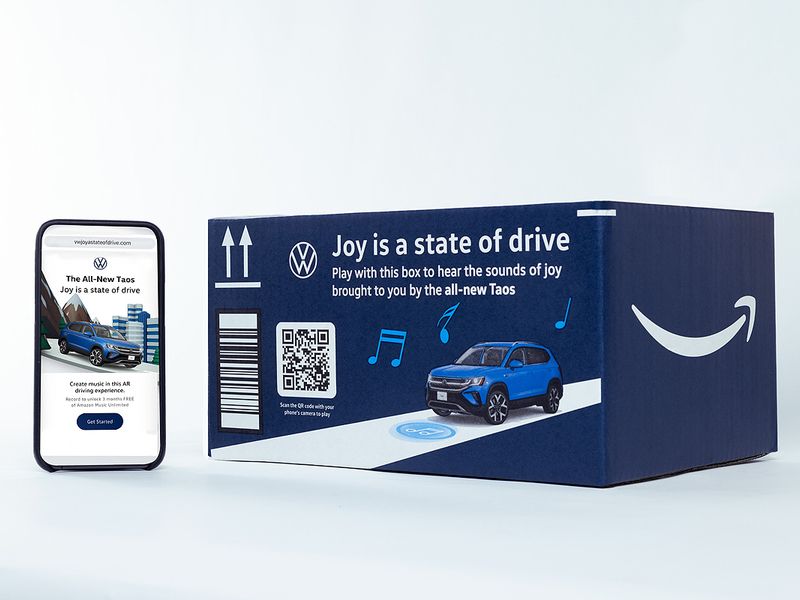 Volkswagen Group of America said it will use the sides of Amazon boxes this holiday season to put virtual butts in the virtual seats of its new Taos subcompact crossover, and reward participants with three months of premium music streaming for virtually going along for the ride.

The German automaker revealed its new Web-based augmented reality campaign Monday to promote the Taos, which went on sale in the U.S. in the second quarter of this year and was the brand’s third-bestselling vehicle in the third quarter, trailing only the Tiguan and three-row Atlas crossovers.

The campaign uses a QR code printed on the side of more than 1 million Amazon boxes to direct consumers to a website, where they are able to experience the Taos and its features across a digital map all while listening to one of four digital soundtracks. By recording the virtual drives, consumers are able to unlock three months of Amazon Music Unlimited at no additional cost, Volkswagen says.

Anyone can access the gateway QR code here, skipping the box.

VW is not the first automaker to turn to Amazon boxes to promote its products. In 2019, Chevrolet promoted its redesigned Silverado pickup on the sides of specially printed Amazon boxes. The delivery behemoth has been selling box-side advertising since 2015, and now does so globally.

Kimberley Gardiner, who this month started her second year as senior vice president for VW brand marketing in the U.S., said in a written statement that the campaign’s focus on pairing driving and music is a perfect message for the Taos, which “gives potential buyers a unique, music-driven way to experience another moment of joy from this SUV.”