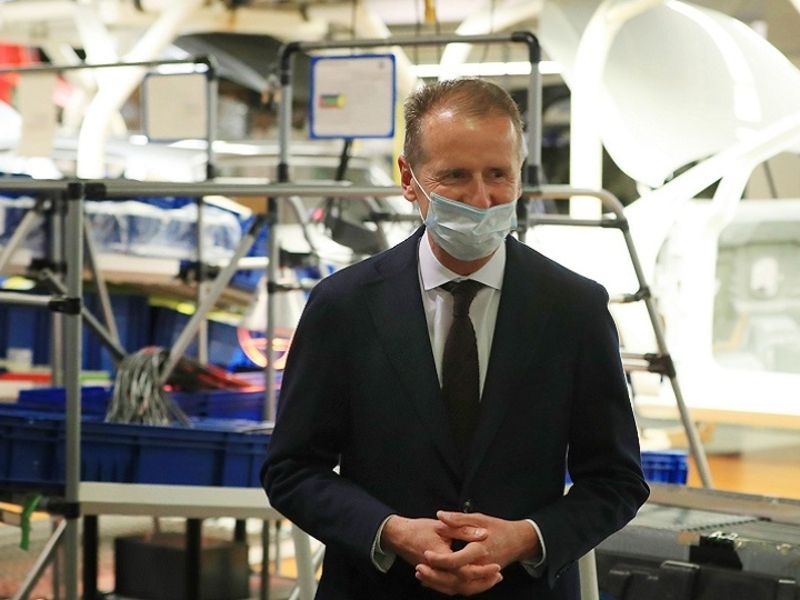 HAMBURG — Volkswagen Group CEO Herbert Diess, currently under heavy fire from unions over strategy, struck an upbeat tone at a recent manager meeting on talks over the company’s five-year investment plan, including the future of its Wolfsburg plant.

According to a copy of his speech from a meeting over the last week, seen by Reuters, Diess said negotiations with unions were going well, and hailed the company’s progress on everything from beating U.S. competitors on autonomous driving to boosting sales in China.

VW was past the worst of the supply chain crisis that has hit production this year, he added, with volumes starting to rise and next year’s outlook improving.

The group’s premium brands were practically sold out next year and order books were full, Diess said — a more optimistic outlook than the company gave at its third-quarter results a month ago. VW Group includes the Audi, Porsche and Bentley premium brands.

“You can see that my mood is very good, because we have made a lot of progress in the last few weeks,” Diess said.

Diess’s position as VW Group CEO has been hanging by a thread in recent weeks amid tensions over his management style and electrification strategy.

VW’s supervisory board will meet on Dec. 9 to agree on a five-year investment plan. But the lead-up to the meeting has been clouded by uncertainty over whether Diess will remain in his position and disagreements over the future of the company’s home plant in Wolfsburg, Germany, where workers fear is being left behind in the transition to electric vehicles.

A decision on whether Diess will stay or go is expected by the end of this week, two sources close to negotiations who declined to be named told Reuters, with the latest round of discussions on the matter taking place last weekend.

On the question of Wolfsburg, management and the works council were discussing building the VW ID3 full-electric compact hatchback at the plant — “it could certainly make sense to produce such a model,” Diess said.

The plant would become unrecognisable by 2030, he promised, with changes underway that would make it “very competitive to Gruenheide” – Tesla’s new European factory near Berlin which, pending final approval, could start series production in December.

Diess has in recent weeks issued frequent warnings about Tesla’s better efficiency and speed compared to Volkswagen’s, expressing fear that VW will quickly fall behind on its own turf.