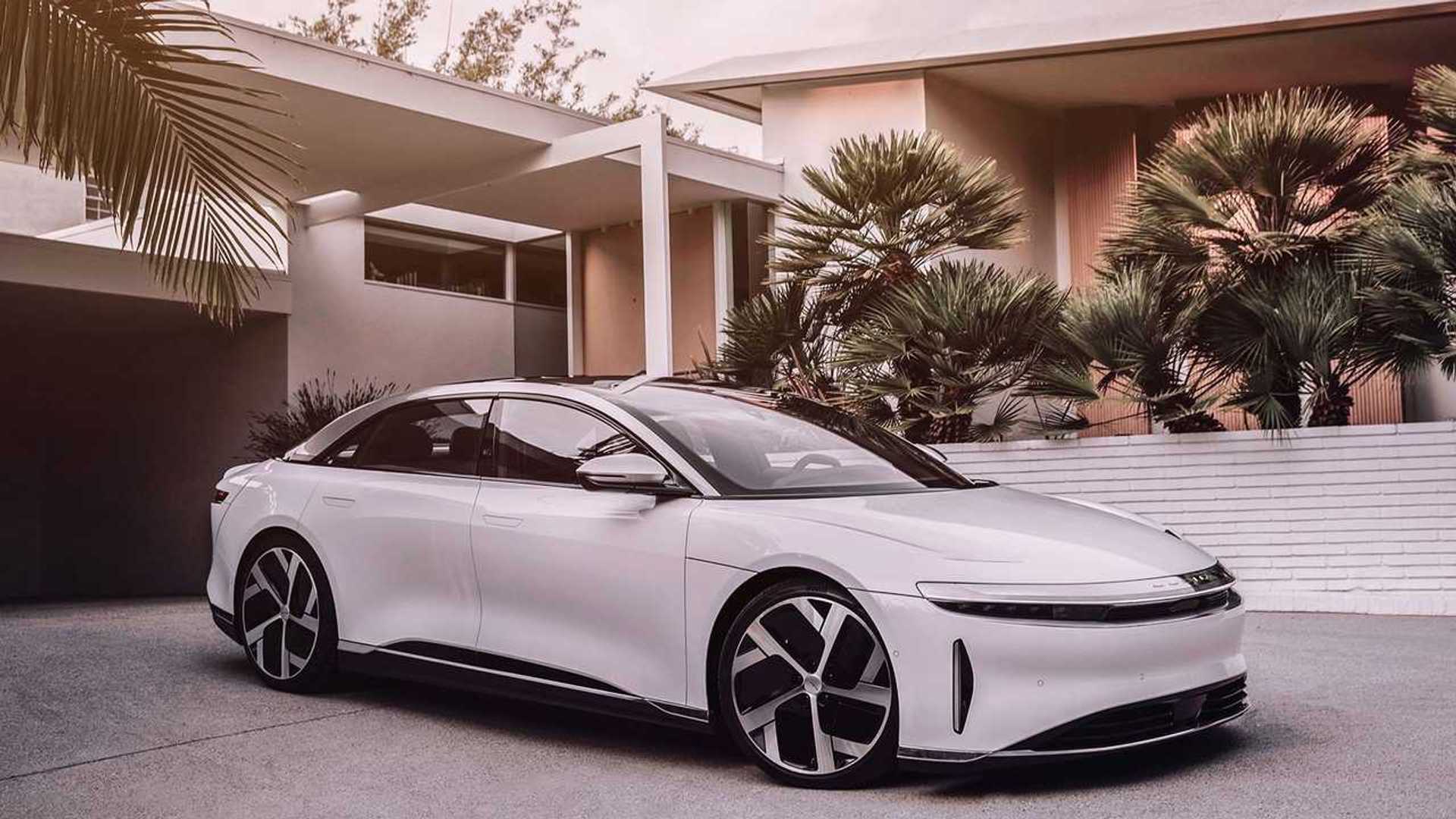 InsideEV’s Senior Editor Tom Moloughney recently had the high honor of performing and reporting on the world’s first third-party, unsupervised 0-100% fast charging test session on the Lucid Air Dream EV. He posted the resulting video on his State of Charge YouTube Channel and in this IEVs article.

The video presented a textbook example of the “perfect” charge session and confirmed Lucid could talk the talk and walk the walk. This independent test demonstrated what well-executed new current-generation premium EVs can do.

Unfortunately, some viewers and readers misinterpreted the charging results as “proving Lucid lied about the battery pack size”, apparently suggesting that Lucid is “cooking the books” and installing a larger-than-claimed battery pack to make puffed-up charging speed and range efficiency claims. They appeared confused by the fact that Electrify America billed Tom for 134 kWh of electrical energy delivered to the vehicle during the charge session. Delivered to a pack with only 118 kWh capacity.

But that is, indeed the case. The pack is 118 kWh and if the EA charger billed Tom for 134 kWh to fast-charge it from 0-100%, then either EA incorrectly billed or that is what it actually takes. I suspect the latter. The amount does not surprise me. I know of which I speak.

I have studied and reverse-engineered dozens of different battery packs from all the various new and legacy OEM’s through the years, estimating or confirming both kWh capacity and charging speed performance. With George S Bower, our findings have repeatedly been published through IEVs. We have a very clear and informed technical understanding of how packs are constructed and how they operate.

The slides below speak for themselves. These screen-shots from an October 30th InsideEVs article by Mark Kane clearly show exactly how the Lucid modules and pack are constructed, the number of cells per module and the number of modules in the Dream pack. Summarizing the slides: 300 cells/module. 22 modules. 6,600 total type 2170 cells. Using currently-available 2170 cell amp-hour and nominal-voltage specs, the estimated total pack capacity would be between 117-120 kWh. So 118 kWh is a very reasonable number. 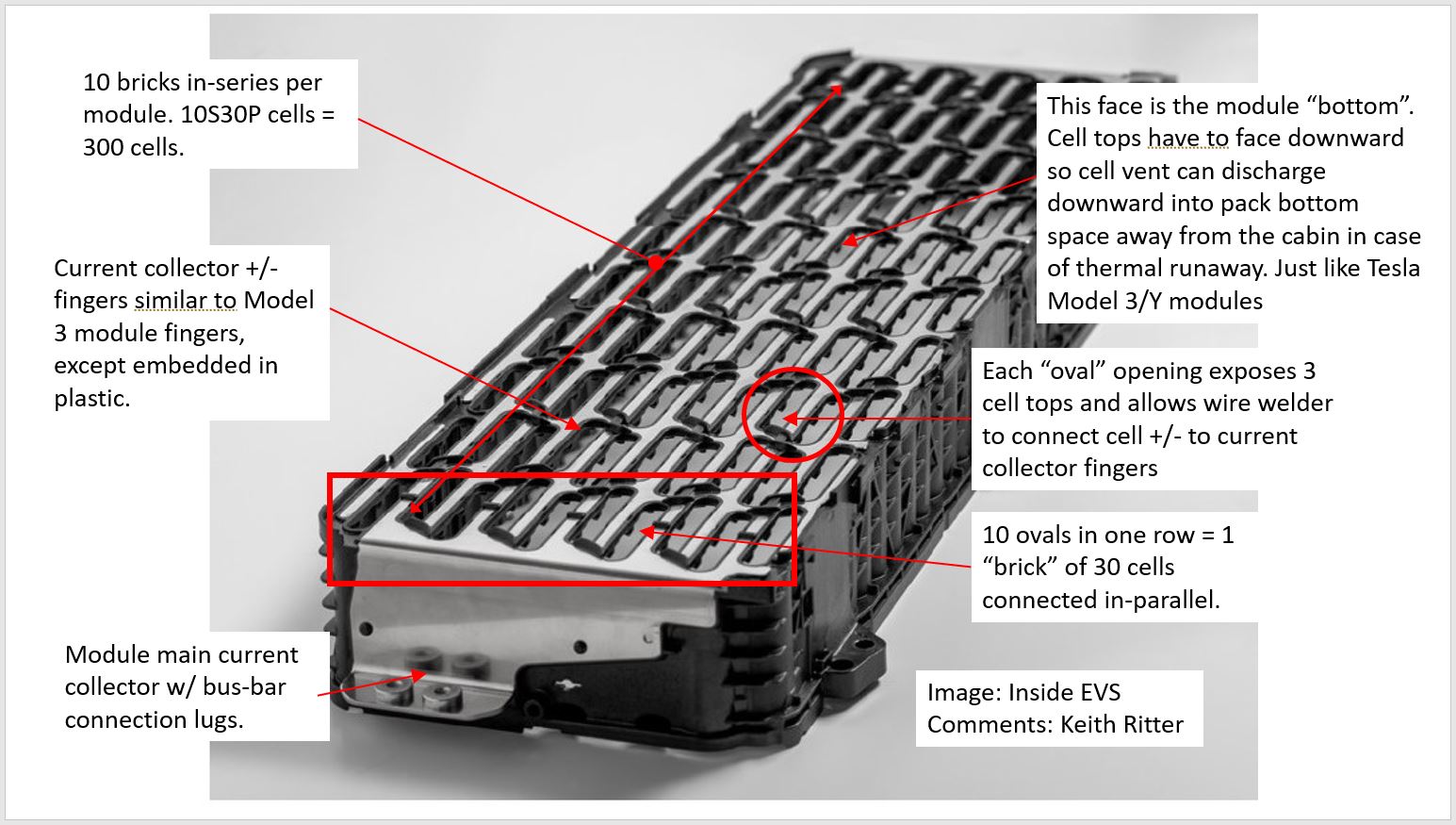 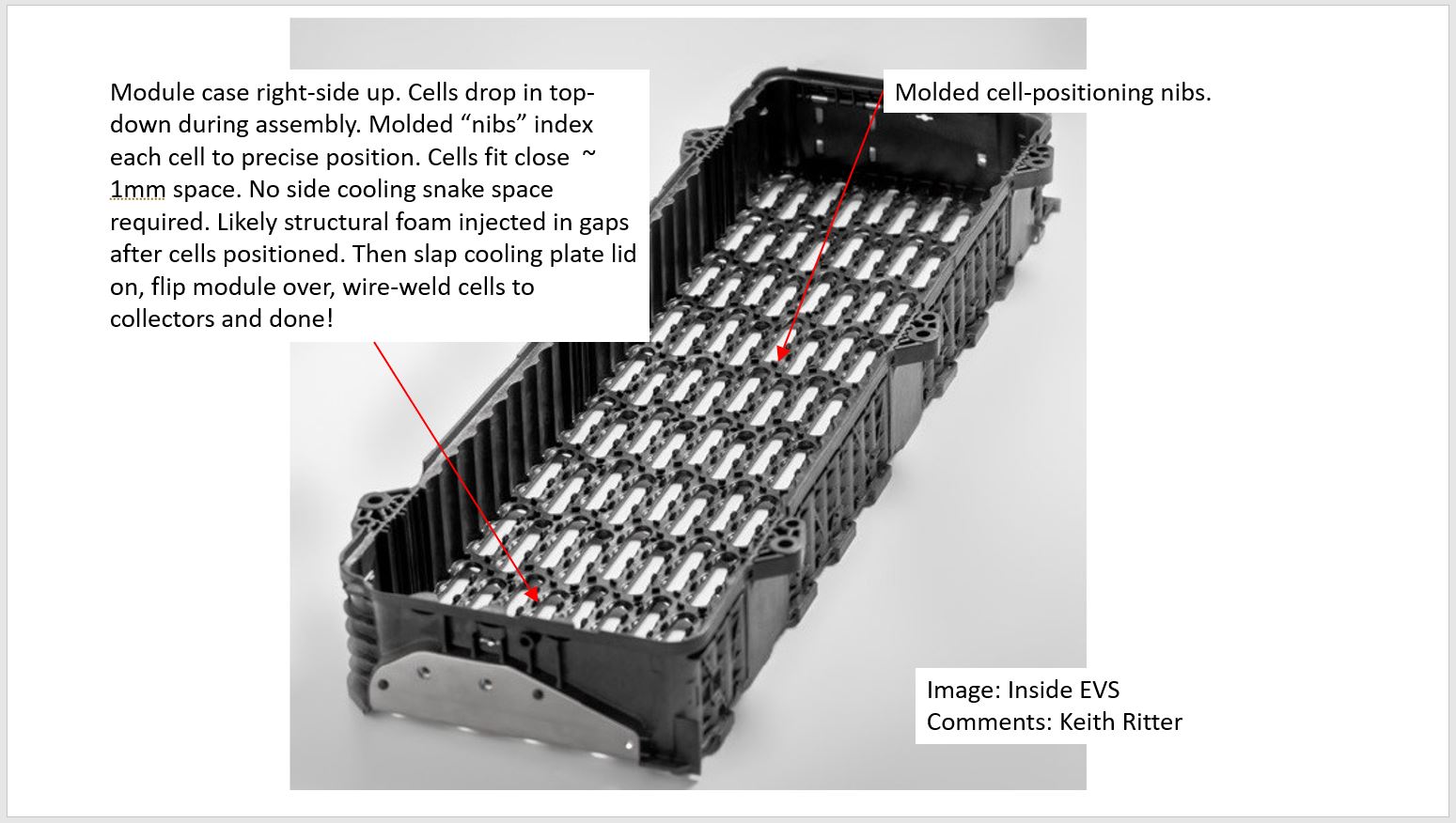 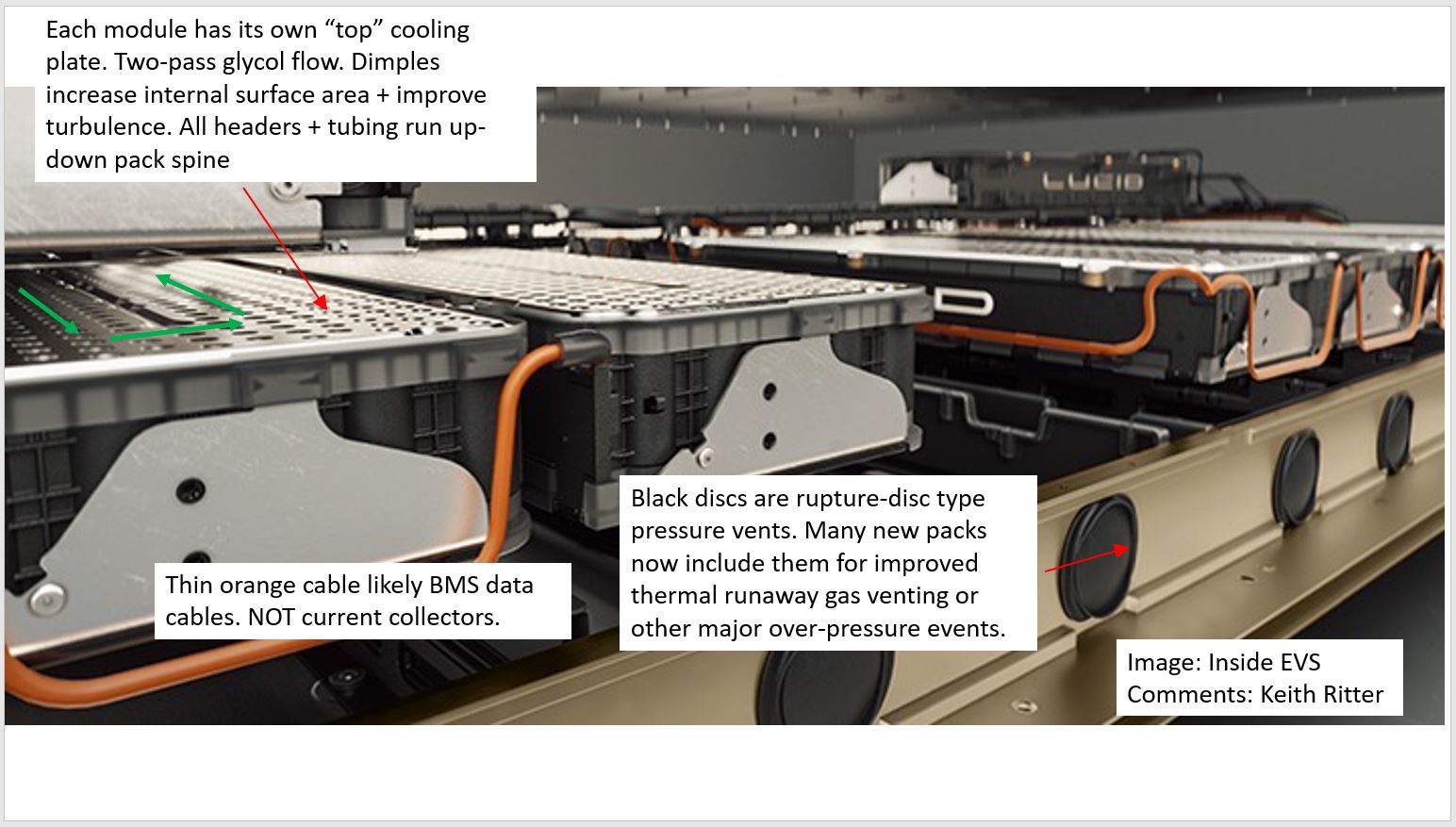 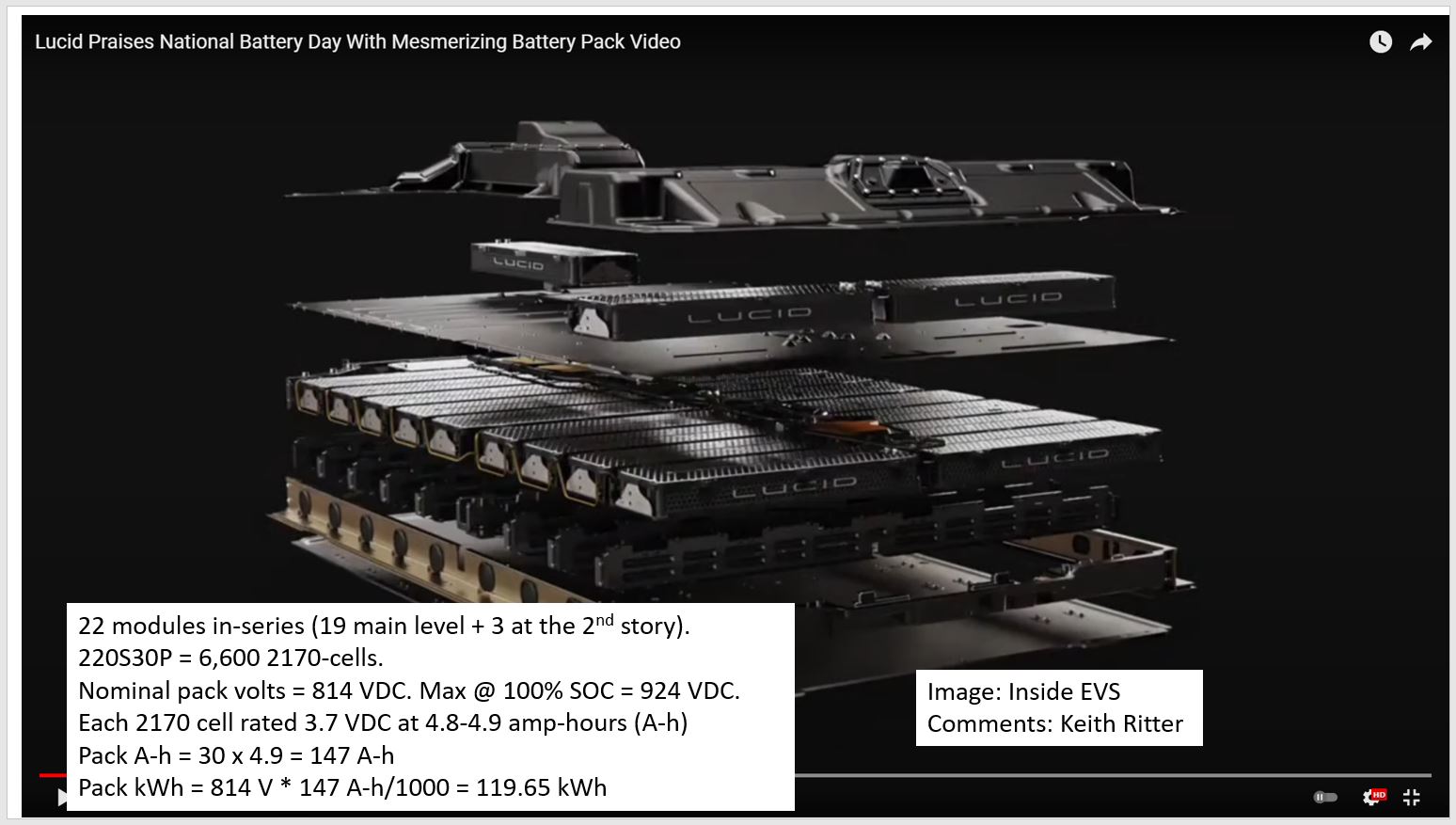 But why, then, was Tom billed for 134 kWh? Based on my experience, thermal-modeling the heating losses incurred in extreme fast-charging sessions, it’s the law. Ohm’s law. And the 2nd law of thermodynamics. The 2nd law says “there are always losses in an energy transfer process”. And in an EV battery charging session, those losses are determined by Ohm’s Law. Heat generated in a circuit = the current I (in amps) squared x the circuit’s resistance R (in ohms).  Heat = I2R

The detailed math of the current flows, resistances, cumulative heat generated, and auxiliary power consumed in this particular charging session is complex and would be the subject of another article.

Suffice to say that for the first five minutes of charging at 300 kW and 350 amps, the battery pack resistance was generating over 20 kW of heat. That pack weighs over 550 kg, yet that 20 kW heat is so intense it likely heated up every cell in that mass from 31⁰ C to their maximum rated 45⁰ C temperature in those first few minutes, with the AC compressor, glycol pumps, and radiator fan all screaming at peak load, drawing an extra 4-5 kW of power.

As the charging amps declined, so did the heat, but it was a long charging session. My back-of-the-envelope calculation suggests the combined pack heat + vehicle cooling system energy losses add up to about 10 kWh by the session’s end.

And then there are the internal distribution HVDC component and system resistance losses. The high voltage cables, the bus bars, the main contactors. The resistances can be less than a milli-ohm at each, but with just 5 milli-ohms total connector resistance, that can add another 5-6 kW of heat losses.

And then there are the CCS charging port contacts. EA liquid-cools their cable. They also liquid-cool that big CCS plug and handle, as the contact resistance between EA’s plug and the EV’s port contacts, with 350 amps flowing through their interface, generates enough heat to scald you and melt the plastic if they didn’t.

CCS head heat losses add another 0.5- 1 kW. See how it adds up? And this is using state-of-the-art equipment, battery design, silver-coated contacts, and high-voltage electronics. Rapidly adding 118 kWh to this pack and only suffering 16 kWh of 2nd-law losses is an EV engineering miracle, not a false-marketing conspiracy.

Yes, the Lucid Air Dream battery pack is probably 118 kWh capacity, and yes, it probably does take 134 kWh to charge it from 0-100%. There is a tsunami of amazing new, fast-charging EV’s approaching us in the months and years ahead. Tom, Kyle and others will perform many more tests with similarly fast results and some significant fast charger losses. It’s time we get educated about how battery packs and fast chargers really work so we won’t be having this argument again.