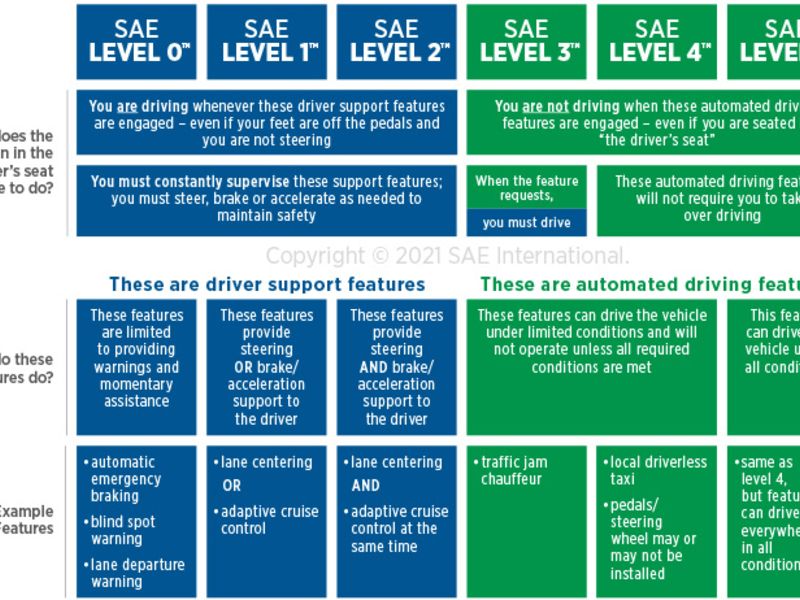 For many people, an automated vehicle means a car that’s fully self-driving in all locations and all conditions, where the occupants could safely nap in the back seat if they wanted.

But there are lower levels of automation to navigate first.

Today’s hands-free driving systems, such as General Motors’ Super Cruise or Tesla’s Autopilot, are considered Level 2 on the scale developed by SAE International. It runs from Level 0, for fully manual, to Level 5, for full-time autonomy, where vehicles might not even have a steering wheel or brake pedals.

The Level 2 systems available today require drivers to stay alert and ready to take over the driving at all times. Level 2 is the most advanced form of automated driving currently available on personally owned vehicles in the U.S. market. The more advanced Level 4 vehicles, such as the robotaxis being tested in various cities, offer full autonomy, but only in certain defined areas such as high-speed, divided highways and pre-mapped city streets.

In between is Level 3, also called “conditional driving automation.” At Level 3, the vehicle does all the driving. That is, until it encounters a problem it’s not equipped to handle, such as an unexpected stretch of road under construction, slippery conditions or a system failure.

When that happens, the driver has to take over, even though the person was not required to pay attention while the Level 3 system drove. If the driver-monitoring system detects that the driver isn’t responding, the vehicle immediately has to find a safe place to park.

That scenario presents some obvious problems — especially the question of who’s liable in an accident.

Some automakers have introduced a limited number of Level 3 systems in other global markets, but not in the U.S.

Honda Motor Co., for instance, introduced a small production run of Level 3-equipped Honda Legend models for the home Japanese market only in March. Audi also has vehicles equipped for Level 3 Traffic Jam Pilot technology, but the German luxury brand still hasn’t turned on that capability.
The U.S. infrastructure is not compatible with the Honda Sensing Elite system that enables hands-free driving in the Legend sedan in Japan, said Jay Joseph, Honda vice president of marketing and customer experience.

In a presentation at the Center for Automotive Research’s Management Briefing Seminars in August, he said the patchwork of regulatory situations in individual states, insurance company policies and other issues are holding back deployment of the Level 3 technology.

“At Level 4, things get cleaner,” Cooke said in a phone interview. “Within geographically bounded boxes, the vehicle is completely responsible. Driver intervention should not be required. Level 4 is straightforward, from a liability standpoint.”

Today’s Level 2 is straightforward, too, he said. “In Level 2, the human is always in charge. Level 3 is where it gets interesting. The vehicle is in charge, until it’s not.”

Meanwhile, studies show it can take up to 15 seconds for a driver who hasn’t been paying attention to get reacquainted with the driving situation, Cooke said. But Level 3 systems, in testing, hand over control with as little as one second’s warning, he said.

Richard Truett contributed to this report.