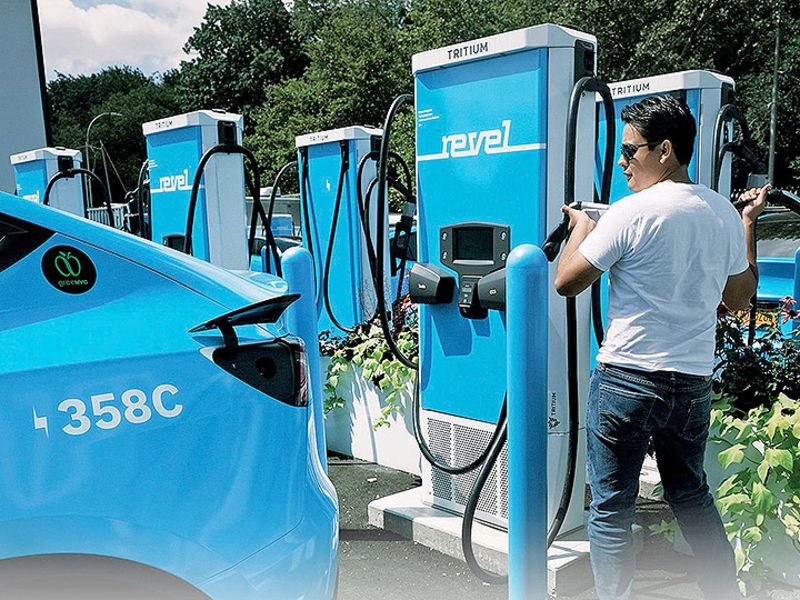 Electric vehicle owners in New York City, many of whom don’t have a driveway or garage where they can plug in, in June got a new place to charge their cars. Revel, the startup best known for its moped-sharing service, opened a charging depot in a former Pfizer building in Brooklyn. The Superhub, as Revel calls it, has 25 fast chargers built by Australian manufacturer Tritium, each capable of adding about 100 miles of range in 20 minutes. For Tritium, which specializes in building weatherproof fast chargers for public networks, the Revel installation is part of a boom in U.S. orders.

In May, when the company announced plans to begin trading in the public markets via a Decarbonization Plus Acquisition Corp II, a special-purpose acquisition company, or SPAC, it had more than 4,400 chargers installed around the globe. Today, the number stands at about 5,250, with an increasing share found on roadsides in North America.

Hunter, formerly of Boeing, joined Tritium in 2019 and became CEO in March 2020. She spoke with Bloomberg in October about the EV tipping point in the U.S., the company’s decision to do a SPAC merger and how Tritium’s hardware stands apart. Here are edited excerpts.

Q: You had a pretty good job at Boeing. What brought you to Tritium?

A: I was the chief operating officer for the international Phantom Works division of Boeing, which was a phenomenal job, headquartered in Brisbane [Australia] with operations in Saudi Arabia, India, South Korea, the U.K. and the United States.

We were doing autonomous systems — unmanned aerial vehicles, unmanned underwater vehicles. I had just secured the Royal Australian Air Force to co-invest in the Loyal Wingman, which is a 38-foot stealth drone. So it was a very hard job to top. But it just was such an interesting time for electric vehicles, just before the tipping point. Everyone was saying, “It’s coming. It’s coming.” But people in the industry had been saying that forever. Our founders have been together for 20 years and working on these chargers since 2012. Everyone could see that e-mobility was about to take off in a big way. And at Boeing, we knew that Tritium had something because we were working in drones and were looking at the potential to electrify charging for those. They had the only liquid-cooled charger successfully being sold globally.

It seemed like an amazing opportunity with a technology that is not yet fully commoditized. We have a world-leading technology, with a technology moat, at a point where if all we do is hang on to our current market position, the total addressable market is enormous.

Why is liquid cooling important for chargers?

It allows for a fully sealed enclosure. For everyone else, you’re sucking air in across filters and pushing it out the back. That’s how you’re cooling the power electronics, which get hot. For us, you’re not pulling any particulates into the charger.

The liquid cooling works its way around the enclosure and keeps it at the right temperature, and that lasts for five years before you need to replace the coolant. If you look at one of our chargers, you’ll see there’s a grille down the bottom, which may look like an air-intake vent. That doesn’t take any air into the top of the charger.

The heat moves into the base of the machine via the coolant and allows you to push the warm air out through that vent while the electronics are fully sealed in the top. It matters a lot where it’s corrosive or dusty or highly polluted. And it also matters where you have things climbing into chargers to nest inside.

We know competitors have issues with mice, rats, geckos, ants, all manner of things. You can imagine why a technology like this might have developed in a country where we have every creepy-crawly known to man, including snakes and spiders. They all are looking for somewhere warm and dry to nest. The sealed enclosure improves uptime (the share of hours when the chargers are working), which is critical. Liquid cooling enables that because you’re not pulling things across the insides of the charger; you’re not getting outages.

There are few things worse for an EV owner than to roll up to a broken charger, especially if there are not options nearby.

That hits the nail on the head. At the gas pump, if there is an outage, it has a sheath over it that says “out of order,” so you know not to queue there. But charging is an entirely different experience. We’ll go into PlugShare.com and read about the user experience and watch some of the YouTube videos that people post as they cross [the] country. They might have to move the car three times. A charger is out. They move it again, plug in, and it doesn’t work. It’s just a horrible experience. One thing that we really discourage our customers from doing is having only one charger at a key site.

What’s finally brought the EV industry to this tipping point?

In every country where the uptake of EVs is high, government has driven it. That’s very clear across the globe. It doesn’t have to be subsidies, but what it does take is an indicator from the government that they’re going to support the technology, that the change is coming and that next time you buy a car, you should buy an EV. People are waiting to hear that.

What you’re seeing with President Biden now is the kind of indicator that you need. It’s the government saying, “This is what’s coming.” That allows people to go out with confidence and buy an EV. The other thing is that several of the car manufacturers decided to go in, boots and all, and make the shift to EVs. So there’s no longer a choice for government to say, “We’re not shifting to EVs, we’re going to stick with internal combustion engine, or we’re going to do hydrogen,” because unless you make the cars yourself, you are not going have enough models.

Tritium seems like a relatively mature business for a SPAC. Why go that route?

It is one of the more mature. The SPAC vehicles are often for more speculative technology. Tritium had been around for quite some time and had been slowly building up revenue.

The company had been very tightly held by three large Australian industrial families, with one institutional investor.

And at the end of 2019, you could really see the market starting to pick up, and they recognized that they were going to need to capitalize in order to compete globally. So they had a very wide look across the market at trade sale options at the option to list. That was exactly as the SPAC market was starting to kick off. I remember the directors, and there’s a number of them who are older gentlemen, were saying, “What’s a SPAC?” But they were very quick to realize this is a phenomenal way of getting to market quickly and to access a material amount of capital, which the company was going to need to scale.

Do you think North America will be your biggest market anytime soon?

I am starting to think that may actually happen. I would never have said that before because we have made most of our money in Europe for quite some time, and North America was slow to take off. But it’s just kicked up so much for us over the last six months. We’re seeing a magnitude of sales that we haven’t seen in the past. The size of the average sale has shifted.

Last year, we would have really sat up and taken notice at, say, 50 chargers in one lot, whereas now 100 to 200 is a big sale. We recently made a sale of 202 50-kilowatt chargers, but the next sell that the customer is talking about, if this installation works well, is 1,000.