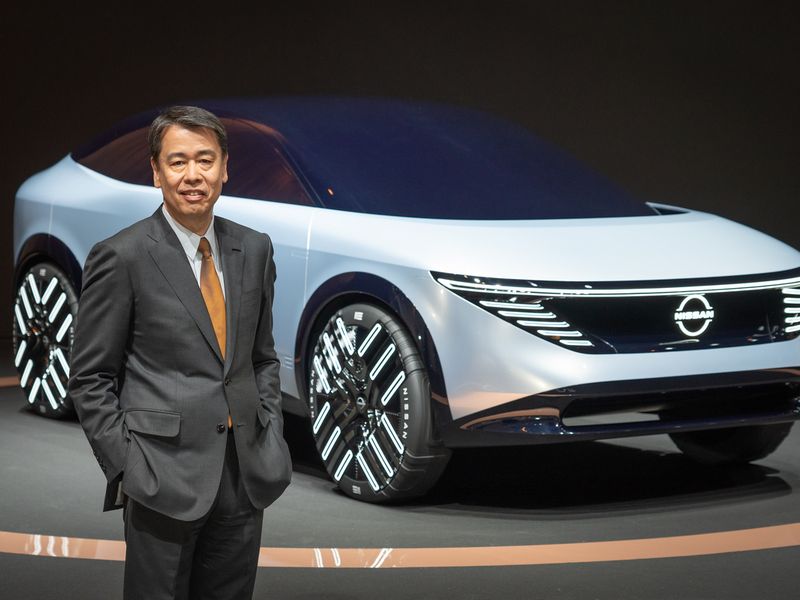 Editor’s note: An earlier version of this story misstated the name of the electric pickup concept Nissan has developed.

TOKYO – Nissan Motor Co. will invest 2 trillion yen ($17.65 billion) in the next five years to amp up an electrified vehicle push with 23 new entries worldwide by the end of the decade, the breakthrough development of solid-state batteries and a plan to derive 40 percent of U.S. sales from pure electrics in nine years.

The presentation included a sneak peek at three fresh concept vehicles that foreshadow the next generation of Nissan’s electrification lineup.

The concepts include a compact all-electric pickup truck called the Surf-Out that is envisioned as an outdoorsy activity vehicle. The others are a sleek, bullet-shaped, open-top sporty model called the Max-Out and a squat utility vehicle called the Hang-Out.

All three are envisioned as running on next-generation solid-state batteries, which Nissan said enables more creative designs and better uses of interior spaces.

Nissan is aiming for a global electrification mix of 50 percent across the Nissan and Infiniti brands by the fiscal year ending March 31, 2031. On tap are 23 new electrified vehicles, including 15 new EVs. Nissan will also dial up deployment of its e-Power hybrid systems.

In the next five years, the company plans to introduce 20 new EV or e-Power models.

Nissan’s quickening pace comes as the industry rushes to plow hundreds of billions of dollars into electrification amid tightening regulations, concern about emissions and shifting consumer tastes. Nissan’s upcoming outlays come on top of the 1 trillion yen ($8.32 billion) the company has already spent to date on electrification technologies, Uchida said.

Nissan’s continued support of hybrid technology puts it in a camp with Toyota Motor Corp. and other rivals that are betting on a gradual shift to all-electric mobility.

“The role of companies to address societal needs is increasingly heightened,” Uchida said. “With Nissan Ambition 2030, we will drive the new age of electrification, advance technologies to reduce carbon footprint and pursue new business opportunities. We want to transform Nissan to become a sustainable company that is truly needed by customers and society.”

Nissan was among the world’s EV pioneers, when it introduced the Leaf hatchback more than a decade ago as the world’s first affordable, mass-produced EV. But it has lost ground in the global EV race as rivals leapfrog it in investment and technology.

Nissan Ambition 2030 could put the Japanese car company back into contention.

“Batteries will be the key to transition,” Uchida said. “With batteries made smaller and thinner, we can offer flexible layouts, with more dynamic performance, expanding to larger segments, like pickup trucks.”

Nissan envisions the breakthrough batteries as slashing the recharging time to one-third that of current batteries while knocking down costs to $75 per kilowatt-hour, below the critical $100 level, by the fiscal year ending March 2029.

Nissan sees further cost gains for solid-state batteries to a level around $65 and eyes eventual price parity between EVs and gasoline vehicles, though it offered no timeframe.

“Battery cost reductions will drastically change the dynamics of EV pricing,” COO Ashwani Gupta said. “We are redefining the role of the car.”

Nissan’s billions of dollars of investment will also fund the expansion of global battery production to 52 gigawatt-hours by the fiscal year ended March 2027, and then to 130 gigawatt-hours by the end of the decade. That will be achieved with partners, it said, though it didn’t mention alliance members Renault or Mitsubishi in a news release.

“With the introduction of breakthrough ASSB [all-solid-state batteries], Nissan will be able to expand its EV offerings across segments and offer more dynamic performance,” Nissan said.

Nissan will also step up localization of manufacturing and sourcing for electrification, based on the EV36Zero electric vehicle hub concept it created in the United Kingdom. The company will build similar EV manufacturing hubs in the U.S. and China. Nissan will amplify that with new battery refurbishing facilities in the U.S. by March 2025 and in Europe by March 2023.