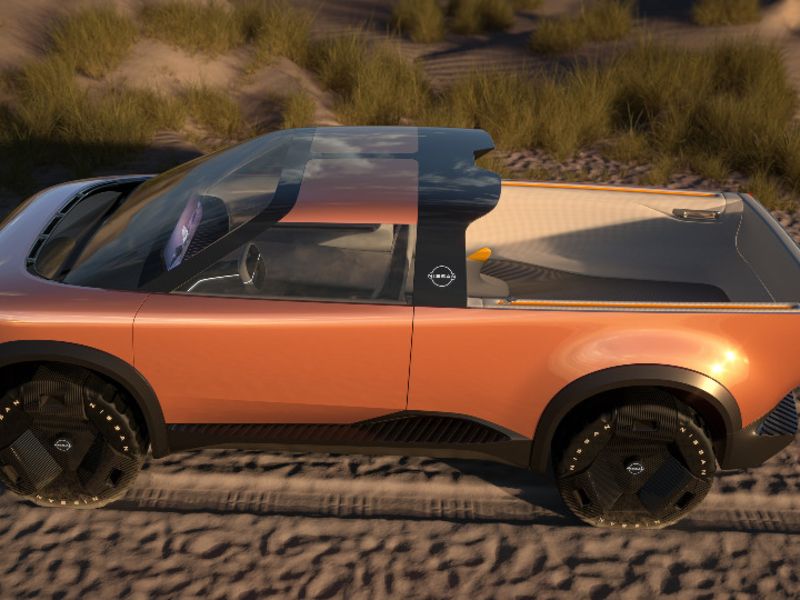 TOKYO — Nissan is teasing a full-electric pickup truck as part of its next-generation product plan, in a possible riposte to off-road offerings being pitched by everyone from Ford to Tesla.

The Surf-Out concept is a funky, outdoorsy activity vehicle with what looks like an open cabin-back for easy access to the pickup bed. The tailgate is fully digitalized for lighting as well as messaging. Meanwhile, a sleek canopy can be pulled over the cargo space for privacy and protection.

Up front, the grille is encircled in wrap-around lighting and emblazoned with brand’s name.

The Surf-Out is one of three new all-electric concepts shown by Nissan on Monday as the company announced investment of 2 trillion yen ($17.65 billion) over the next five years to ramp up an electrified vehicle push with 23 new entries worldwide by the end of the decade.

“Batteries will be the key to transition,” CEO Makoto Uchida said while unveiling the concepts in an online briefing. “With batteries made smaller and thinner, we can offer flexible layouts, with more dynamic performance, expanding to larger segments, like pickup trucks.”

Nissan’s concept comes as competitors rush into the full-electric pickup segment, especially in the U.S. market where pickup trucks remain a top pick, with about 18 percent of the U.S. market.

Nissan has long struggled to claim a bigger slice of the key pickup market. Its Titan full-size pickup sits at the bottom or its segment, while the Frontier hovers mid-pack in the midsize group.

Ford, the pickup king with its best-selling F-Series, is developing a battery-powered version called the F-150 Lightning. Chevrolet plans an electric Silverado in 2023, Tesla has its Cybertruck and startup Rivian is in the race with the R1T. There is also the GMC Hummer EV.

“The vehicle’s variety of power outputs, and low and flat cargo space are aimed to help you go wherever you want and amplify your experience when you get there,” Nissan said.

But it appears Nissan is waiting for the solid state battery breakthrough before it ventures into pickups, and that will only come at the very end of the decade.

Executives said the new batteries will not only allow more creative packaging but also bring down the cost of EVs, partly because solid-state batteries are expected to be safer than today’s lithium ion power packs and not require as much cooling and structural protection.

The other next-generation concepts shown by Nissan include a sleek, bullet-shaped, open-top sporty model called the Max-Out and a squat utility vehicle called the Hang-Out.

Nissan says the next-generation EV platform will be ultra-lightweight, use front and rear motors, have a very low center of gravity and use advanced systems of e-4ORCE and the company’s ProPilot automated driving system.

As part of its announcement, Nissan said it wants a global electrification mix of 50 percent across the Nissan and Infiniti brands by the fiscal year ending March 31, 2031. On tap are 23 new electrified vehicles, including 15 new EVs.