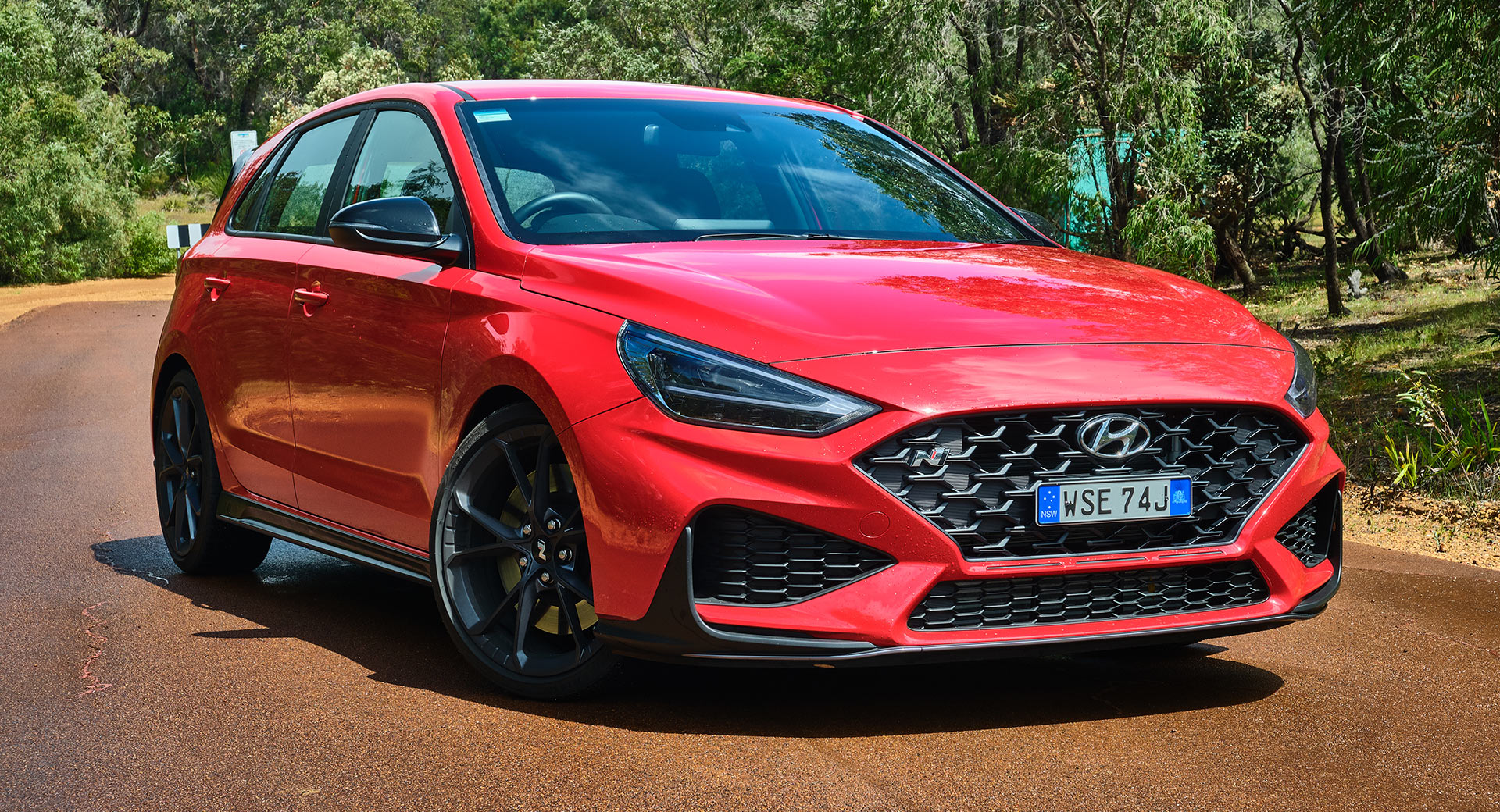 From the moment the Hyundai i30 N was launched, it put the hot hatch market on notice. Now, four years on, it has been facelifted and with its mid-cycle update, is now available with a dual-clutch transmission. We recently put it to the test.

Hyundai didn’t go back to the drawing board when updating i30 N – and it didn’t need to. After all, the original model proved itself to be exceptionally well-rounded and was priced competitively against its rivals. This isn’t to say the updates made aren’t welcomed. They very much are.

The most notable update made to the facelifted model, at least from a styling perspective, are the new headlights. They come complete with V-shaped LED daytime running lights that have a transformative effect on the overall look of the hatch, providing it with a much more menacing and in-your-face design. Complementing these new headlights is a revised grille and angular air intakes. 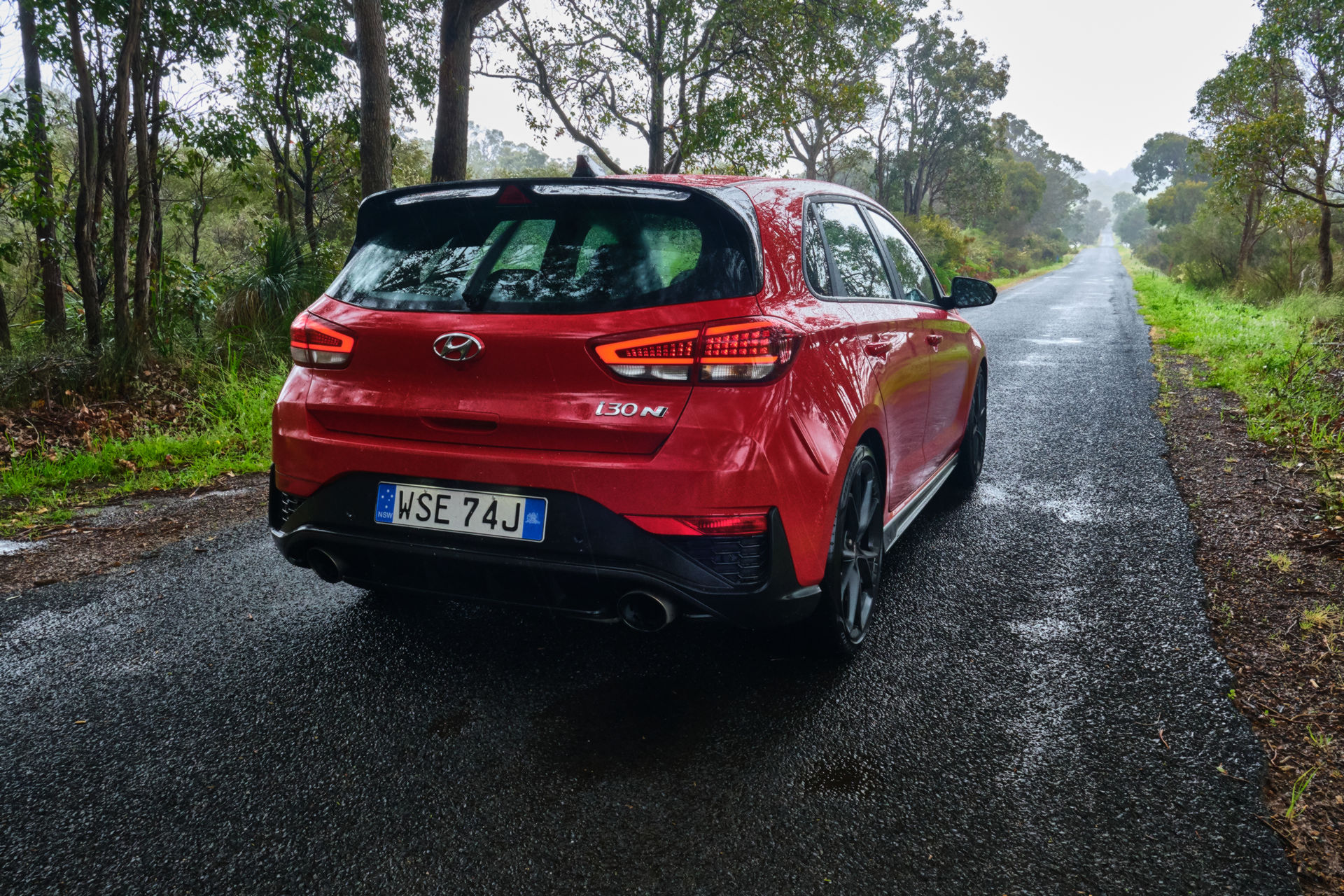 Some important updates have been made in the cabin of the facelifted model. The most significant upgrade is a new 10.25-inch infotainment screen that rocks the automaker’s latest software. This system is more akin to the infotainment you’ll find in a new Genesis model than the one it replaces. Not only is it bigger, brighter, and clearer, but the screen is more responsive to the touch. It would be nice if it was angled towards the driver, though. 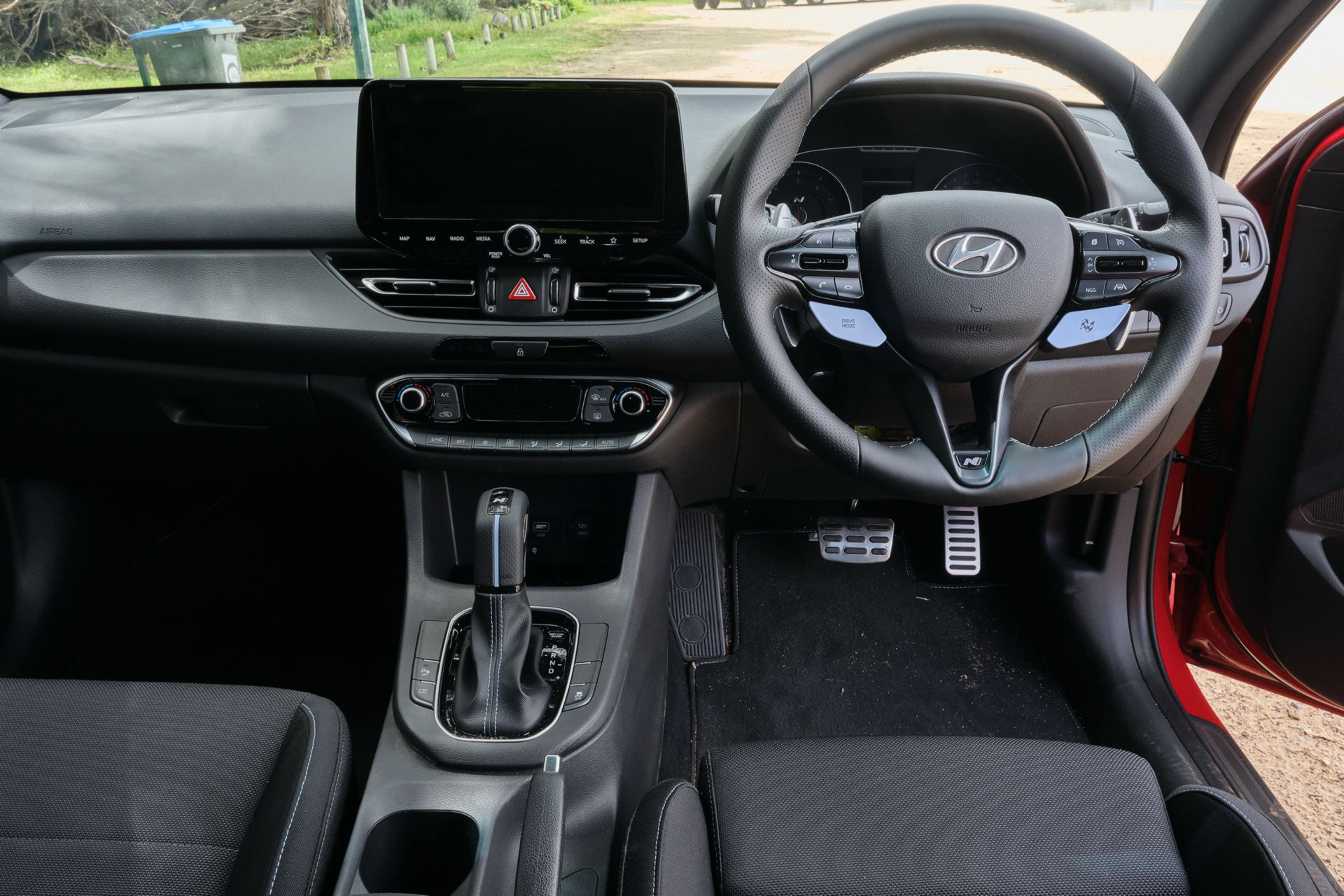 Among the key standard features include a tire presure monitoring system, wireless phone charging, and dual-zone climate control, while the infotainment display also includes digital radio and satellite navigation. There is also a reversing camera with parking sensors.

New for the 2021 model is the availability of Alcantara-appointed lightweight front bucket seats, complete with an illuminated N logo. Unfortunately, these seats are not available in the entry-level model and only offered with the i30 N Premium variants. I haven’t personally sampled these seats but have heard good things about them, with one owner telling me they are more supportive than the standard ones and sit much lower. By comparison, the standard i30 N retains the same front seats as the pre-facelift model. They are solid units with good bolstering but for taller drivers, cannot be lowered as much as we’d like.

The rest of the cabin is a nice place to be, although it is starting to feel a little dated when compared to some newer Hyundai models. The dashboard, door panels, and transmission tunnel are dominated by hard, scratchy, black plastic. The steering wheel, however, is a key highlight and clad in lovely, soft-touch leather. 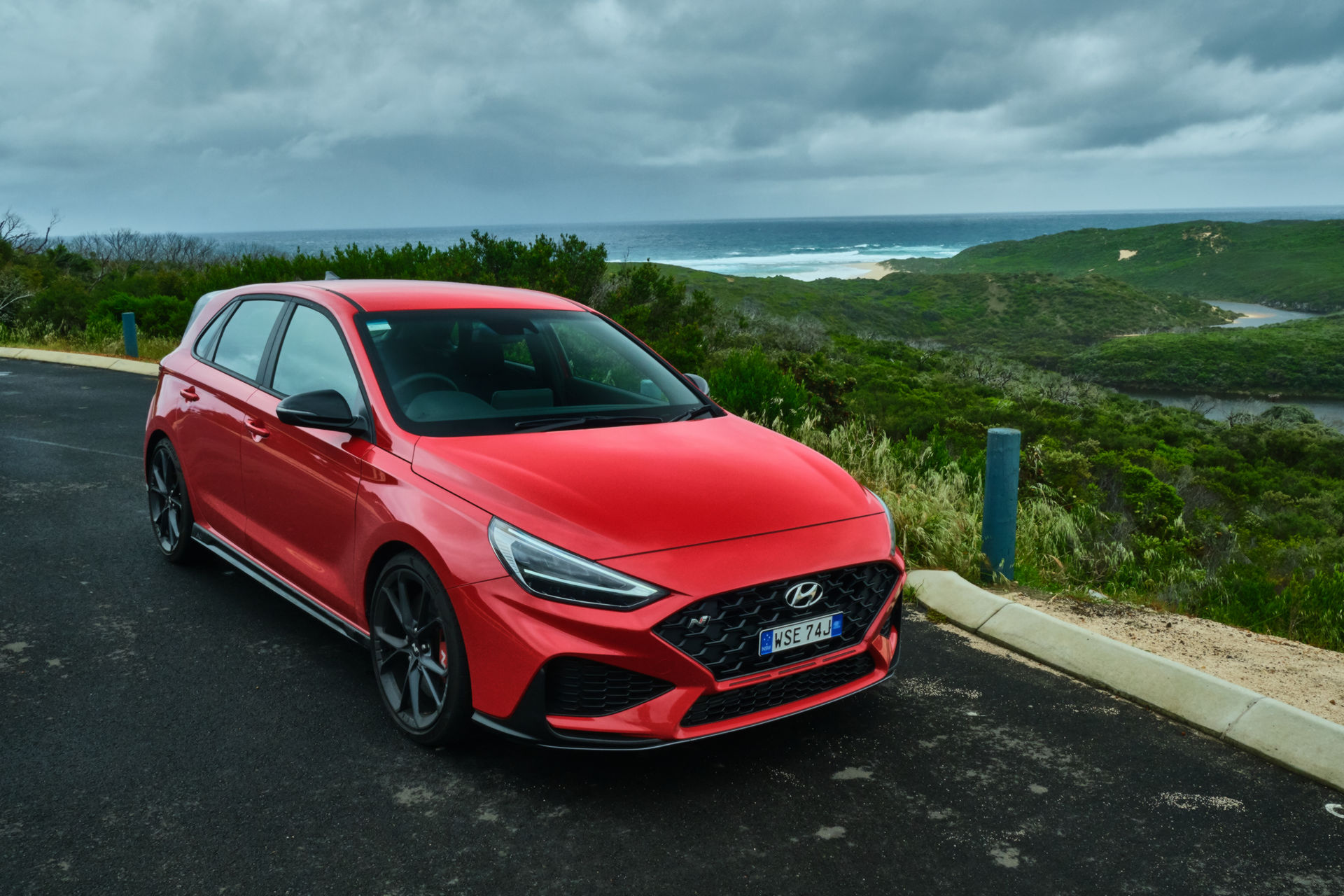 I’ve always liked the Hyundai i30 N and for 2021, the car continues to be powered by a 2.0-liter turbocharged four-cylinder. In certain markets, this engine is sold in two different flavors with the entry-level model rated at 246 hp (183 kW) and 260 lb-ft (353 Nm) and the Performance Package variant pumping out 276 hp (206 kW) and 289 lb-ft (392 Nm) of torque. Horsepower-loving Australians are only offered the latter.

This engine has always been a strong point of the i30 N and it remains so. It produces solid power and torque across the breadth of the rev range and starts to pull particularly strong after 3,000 rpm. Throttle response is also good.

A key characteristic shared among most front-wheel drive hot hatches with over 250 hp is torque steer and the Hyundai has loads of it. Whenever you pin the throttle and regardless of what gear you’re in, the steering wheel will tug to the left and the right as the car tries to put all of its power to the ground. The torque steer is not as prevalent as the Renault Megane R.S. Trophy but Hyundai clearly hasn’t tried to engineer-out the torque steer like Honda did with the FK8-generation Civic Type R. Personally, I quite like torque steer as it adds some theater to the driving experience, making it feel like you’re driving a car with more power than the spec sheet actually reads. However, it is something shoppers should be aware of.

And that all-important gearbox?

Coupled to this engine is the new dual-clutch eight-speed automatic transmission. No beating about the bush here: it is exceptional.

Hyundai’s decision to originally launch the i30 N exclusively with a six-speed manual transmission helped to appease driving enthusiasts but also restricted the car’s sales prospects. By adding a dual-clutch to the mix, Hyundai hasn’t just broadened the appeal of the hot hatch but has also created a dual-clutch system that rivals the very best in the segment.

While driving the car for the first time with the transmission in its automatic mode, I was immediately impressed with the fluidity of the eight-speed at low speeds. It is no secret that some dual-clutch gearboxes out there can be jerky when driving slowly but Hyundai has done an excellent job of ironing out these inconsistencies, resulting in a transmission that is smoother at low speeds than the DSG used by the Mk7.5 VW Golf GTI and Golf R (I haven’t yet sampled the Mk8 models). Helping to make the transmission as smooth as it is is a Creep start function that allows the car to creep forward when you let your foot off the brake from a stop, somewhat mimicking a traditional torque converter automatic. 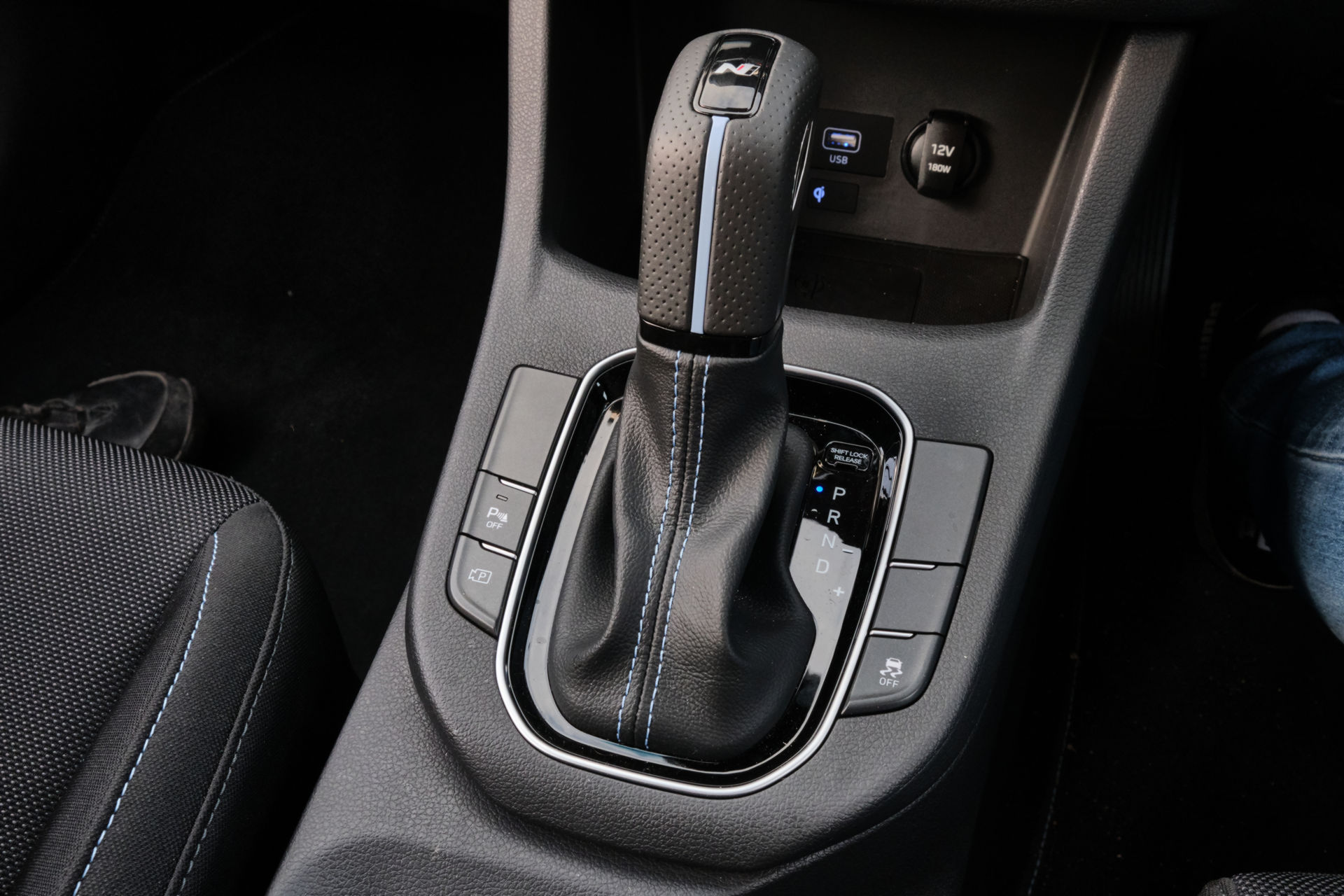 It’s not just at slow speeds where the new transmission works well. Hyundai was clearly keen to inject as much emotion and excitement into the gearbox as possible when developing it and has equipped it with N Power Shift, N Grin Shift, and N Track Shift functions. Just what do they do?

Well, N Power Shift (NPS) kicks in when you depress the throttle more than 90 per cent and is designed to mitigate any reduction in torque during upshifts. This function is particularly noticeable when enabled as it gives you a nice shove while changing gears, adding some theater to the dual-clutch.

N Grin Shift is another neat feature and can be enabled with a button on the steering wheel. It maximizes engine and transmission performance for a period of 20 seconds, automatically shifting down to the lowest possible gear and producing a cacophony of pops and bangs from the exhaust whenever you lift off the throttle. It is particularly useful when overtaking. As for N Track Sense Shift (NTS), Hyundai says it optimizes shifting for racetrack driving and is activated automatically but as it operates in the background, it doesn’t add anything to the driving experience.

DCTs can be fun too

Like the six-speed manual model, the i30 N DCT also has a launch control function, although you have to go into the vehicle settings to enable it each time, which is a pain. It works well in managing wheelspin in dry conditions, enabling us to record a best 0-100 km/h (0-62 mph) time of 5.5 seconds, very close to the claimed 5.4 second time. If the road is wet and you use launch control, the car will happily ping off the rev limiter in first and second before finally getting traction in the higher gears. A set of nicely positioned paddle shifters behind the wheel round off what is a very good transmission. 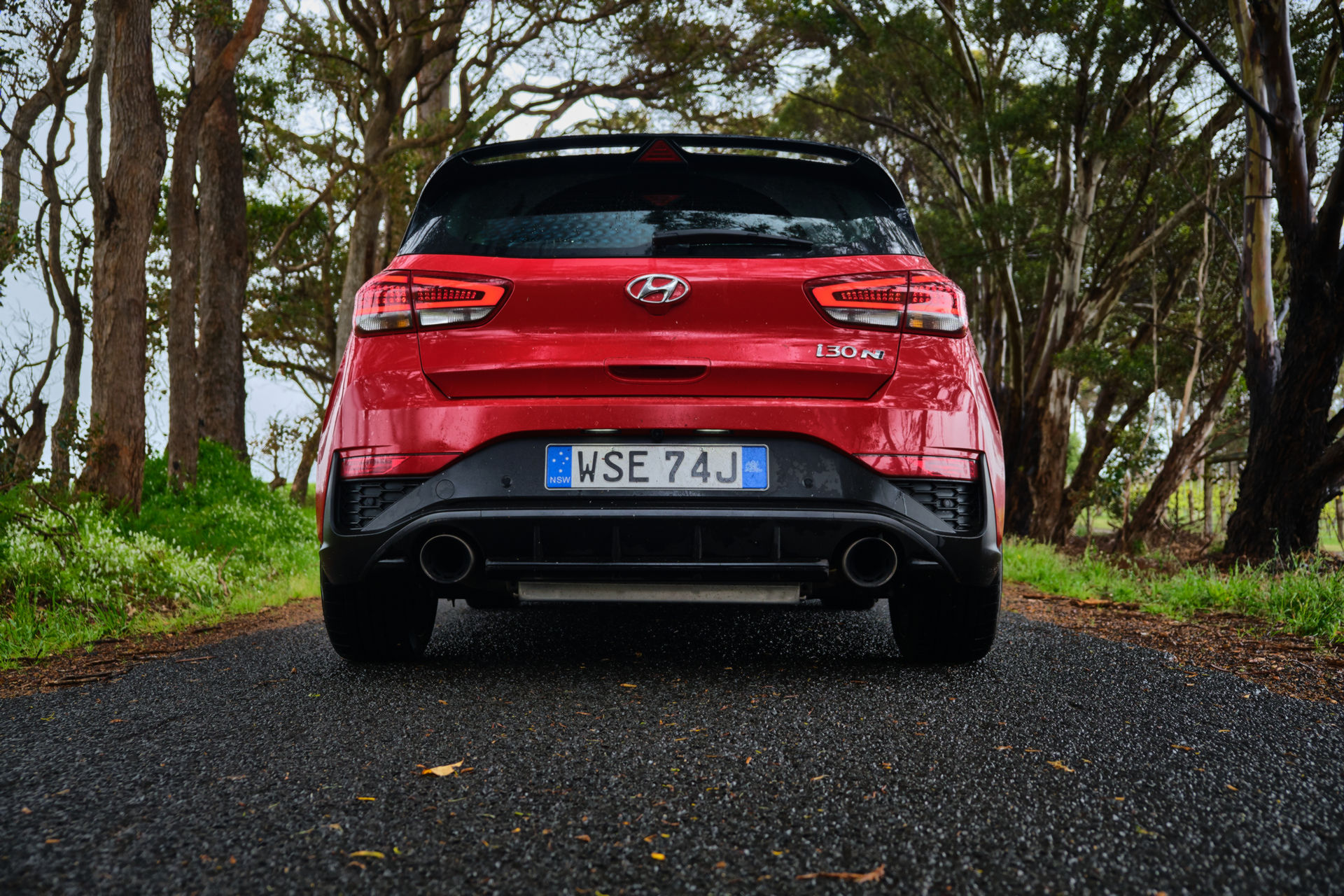 Like the pre-facelift model, this new one handles just as well thanks to the electronic limited-slip differential (Hyundai calls it the N Corner Carving Differential…) that shuffles power through the front wheels. A handful of different settings are available for the eLSD but regardless of which one you choose, you’ll experience insane levels of grip, even if you mash the throttle in the middle of a corner. Push the car beyond the limits of adhesion and it is often the rear end that starts to step out before the front begins to understeer, resulting in a very playful hot hatch to drive on the limit. A set of stickier tires would make it even better.

Driving enthusiasts will be pleased to know the facelifted i30 N offers the same N Custom mode as the model it replaces, allowing you to customize everything from the engine to the exhaust sound, e-LSD, transmission, steering, suspension, and ESC. The interface for the N Custom mode has been updated for 2021 and while it does take a couple of minutes to get acquainted with, it is easy to understand. Throughout our week with the car, we drove it primarily in N Custom with everything dialed up to the most extreme settings, albeit for the suspension and steering which we left in Normal.

It is certainly possible to drive the car with the suspension and steering in their Sport and Sport+ settings but you’ll be worn out at the end of the day. With that being said, the Sport+ setting for the suspension isn’t unbearable on shorter journeys as it delivers a ride similar to the fixed dampers of the Renault Megane R.S. Trophy. 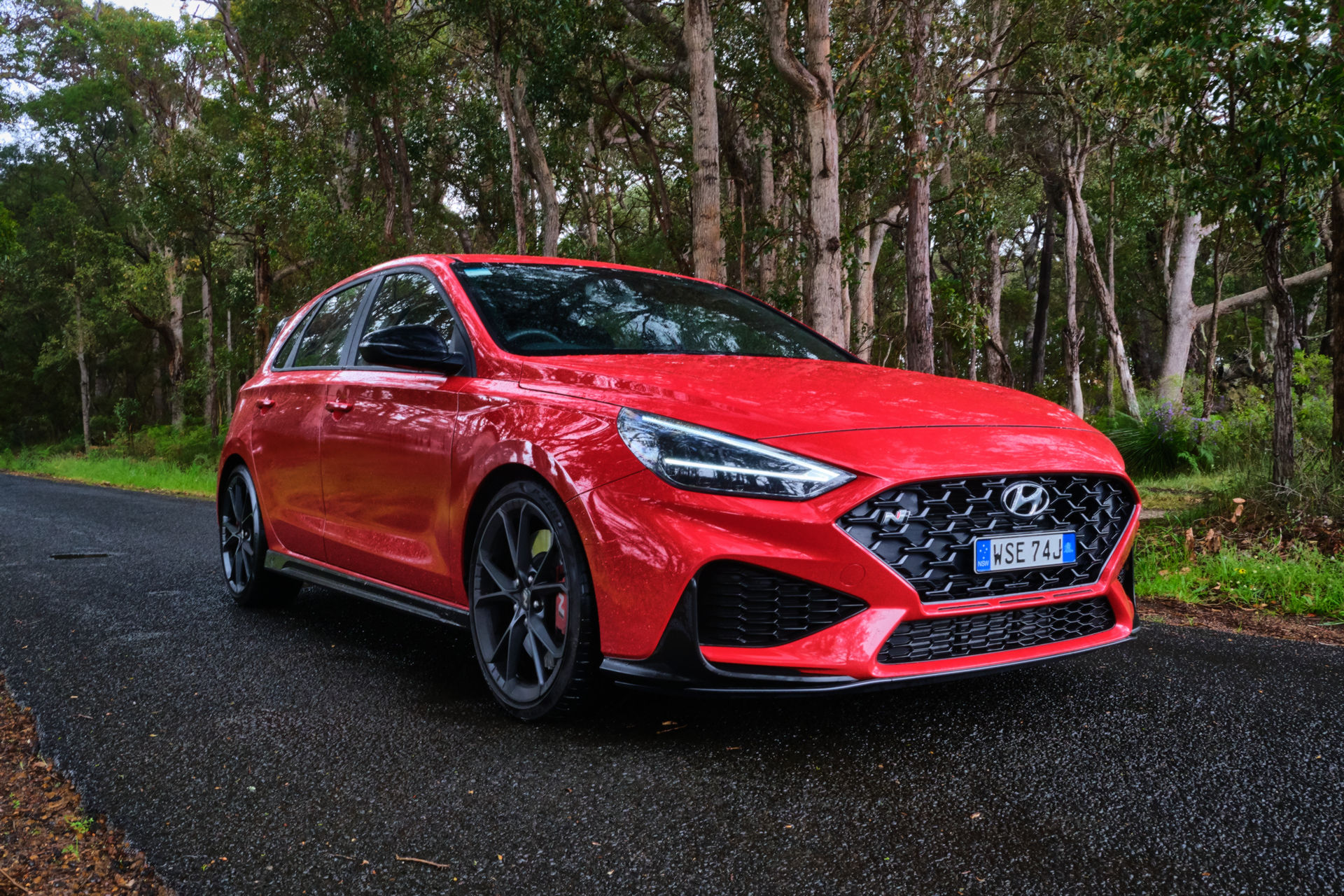 The well-rounded character of the 2021 Hyundai i30 N DCT impressed me the most. The inclusion of a dual-clutch transmission gives it a breadth of abilities that the six-speed manual can’t match as with a simple toggle of the drive mode selector into Normal mode, the DCT-equipped i30 N drives exactly like a regular i30. Tap the N or NGS buttons, however, and it transforms into something much more visceral that thrives when driven at ten-tenths.

I’ve never owned a car with an automatic transmission before and even I’d be tempted to opt for the DCT over the six-speed. We’d be surprised if DCT models didn’t account for at least 75 per cent of sales – that’s how good it is.