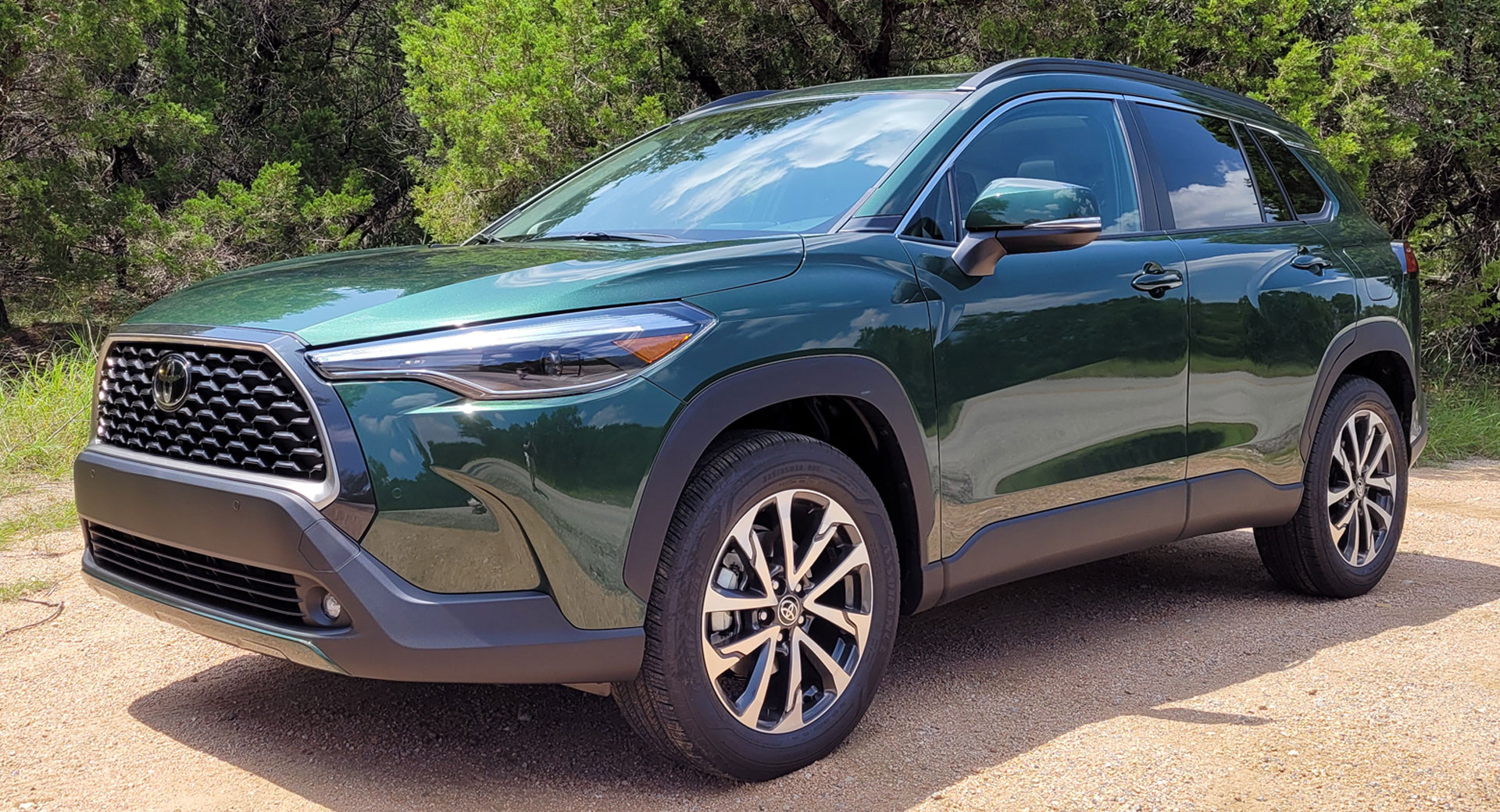 The Toyota Corolla was introduced 55 years ago and, with 50 million units, is the best-selling vehicle of all time.

However, a lot has changed in the past five and a half decades so the Corolla is following suit by spawning a crossover variant.

Known as the Corolla Cross, the new model seeks to build on the car’s reputation as being an affordable and reliable people mover. Of course, the company’s ambitions are bigger than that and this is clearly reflected in the decision to build the crossover at an all-new plant in Alabama, which has the capacity to turn out 150,000 units annually.

Not Your Typical Corolla 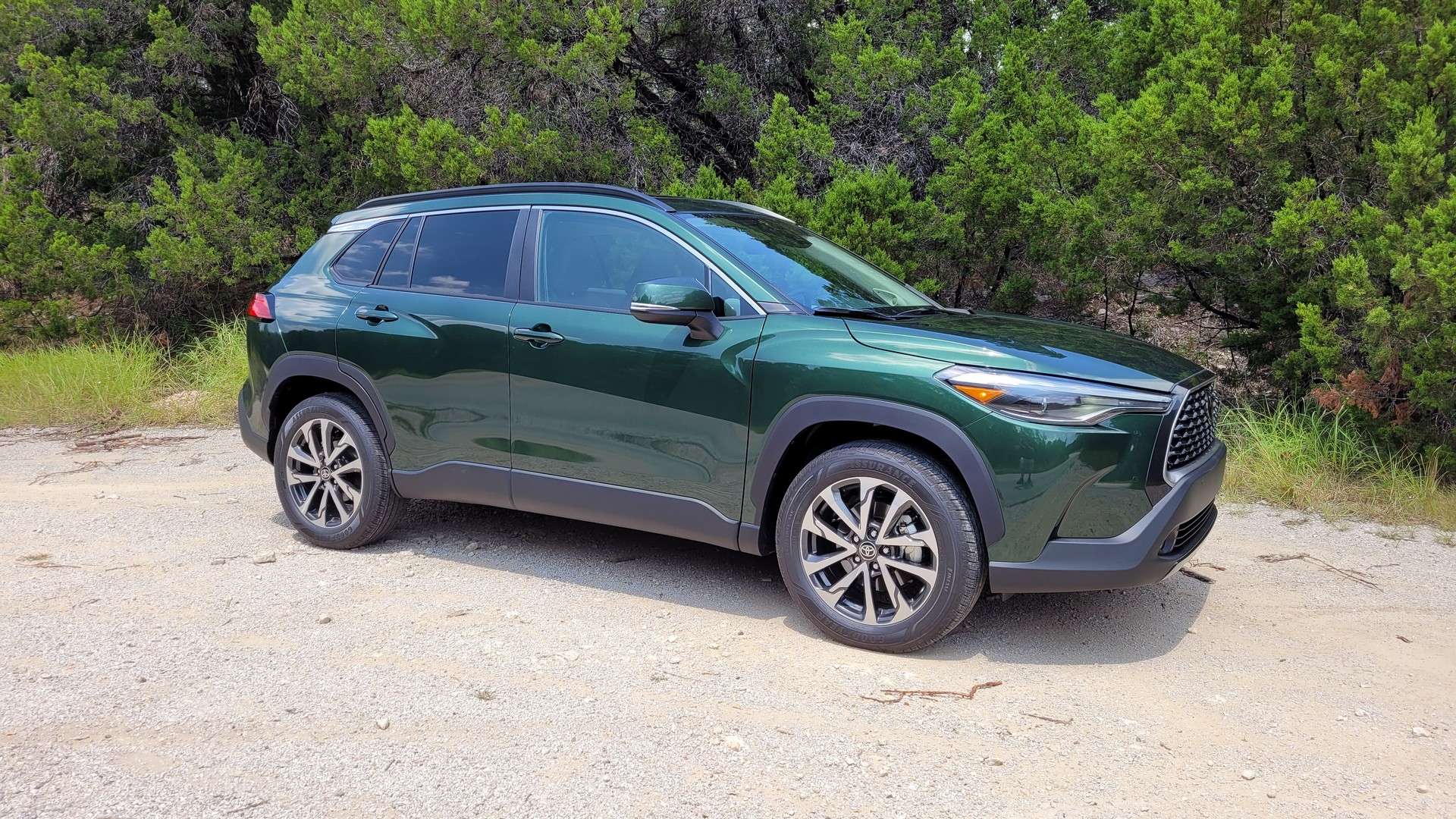 While the 12th-generation Corolla features an aggressive design, the Corolla Cross goes in a slightly more generic direction which is typical of the segment. It’s far more conventional than the C-HR and adopts traditional crossover styling cues such as plastic body cladding and faux skid plates.

The resulting design is fairly conservative, but reasonably handsome especially in Cypress Green. Three different trims are available, though all Corolla Crosses come with a black grille, body-color door handles and LED headlights. However, you can easily spot the entry-level variant thanks to its 17-inch steel wheels and a lack of privacy glass.

At the opposite end of the spectrum, the range-topping XLE boasts LED fog lights and 18-inch alloy wheels. Buyers will also find additional chrome trim including a “Corolla Cross” badge on the rear pillar.

A Familiar But Cozy Cabin 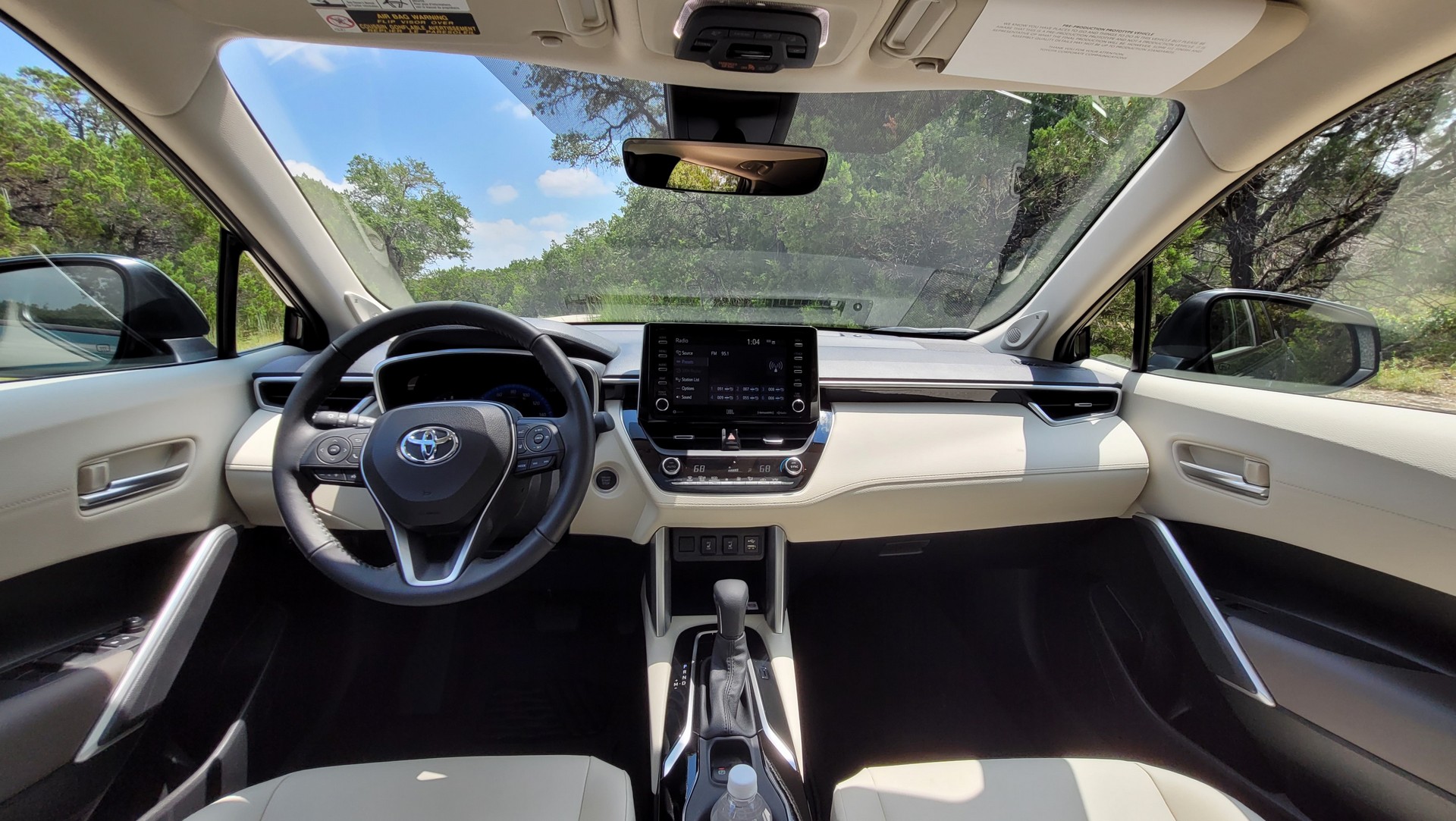 While the model is virtually unrecognizable as a Corolla from the outside, the same can’t be said about the interior as the cabin is heavily influenced by its namesake. This is a bit of a mixed bag, but the design is thoroughly modern thanks in part to a freestanding 7- or 8-inch infotainment system with Android Auto, Apple CarPlay and Amazon Alexa compatibility.

The infotainment system is easy and intuitive to use, but it’s interesting to note navigation isn’t even available as an option. We talked to a handful of Toyota officials about this and the company believes Corolla Cross buyers would rather use Android Auto or Apple CarPlay instead.

On the topic of screens, the crossover eschews a digital instrument cluster for analog gauges and a small 4.2-inch multi-information display. That being said, the range-topping XLE has a 7-inch display that acts as a digital speedometer. 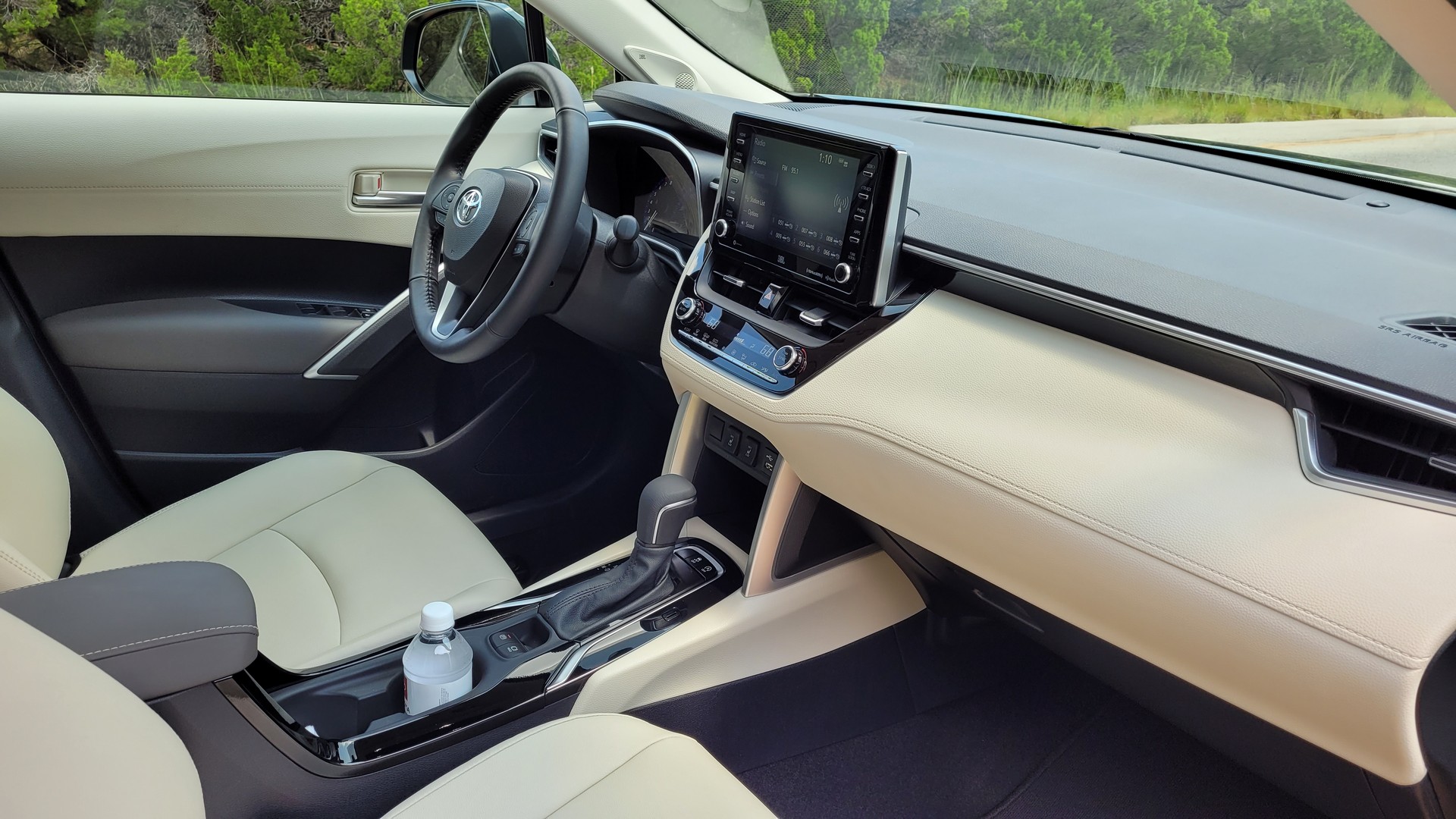 Given the model’s focus on value, it comes as little surprise the entry-level variant has a manual climate control system, a urethane steering wheel and vanity mirrors without illumination. Buyers will also find a single upholstery option, but there are niceties such as power windows and locks as well as rear air vents.

Also: Want A New Toyota? Here’s What’s Best Suited To You According To Your Star Sign

These are basic accommodations, but a majority of buyers will opt for the mid-level LE trim which boasts amenities such as a leather-wrapped steering wheel, a wireless smartphone charger and a larger 8-inch infotainment system. They’ll also find an automatic climate control system and a passive entry system with a push button ignition.

Buyers looking for more luxury can opt for the XLE trim, which adds heated SofTex front seats with 10-way power adjustment on the driver’s side. They’re a little firm, but the available two-tone design helps to spruce up the cabin. 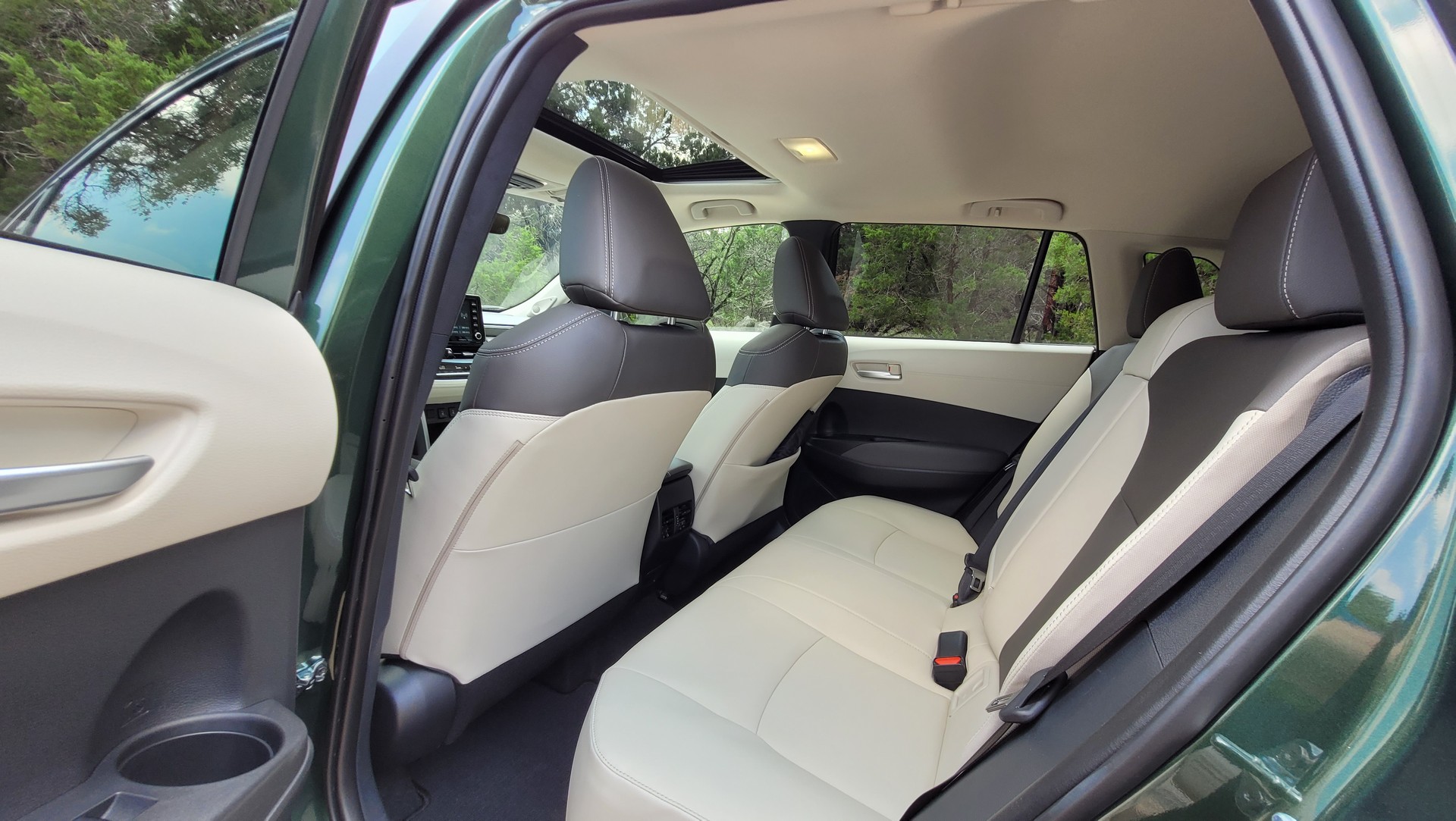 While the front seats are reasonably spacious, the back seats leave something to be desired as there’s a scant 32 inches (813 mm) of rear legroom. That’s less than the Corolla sedan and it’s a bit of a squeeze for adults, who would be much happier in the roomier Chevrolet TrailBlazer, Kia Seltos or Volkswagen Taos. Those models offer an extra 5.9 – 7.4 inches (150 – 188 mm) of rear legroom and that’s a huge difference.

The cargo compartment holds up to 26.5 cubic feet (750 liters) of luggage. If that isn’t enough, folding down the rear seats increases the expanse up to 66.8 cubic feet (1,892 liters) and that’s more than competitors such as the TrailBlazer and Seltos. However, the load floor isn’t flat and instead resembles a ramp worthy of Evel Knievel.

That isn’t the only demerit as the cabin has hints of cheapness. This isn’t unusual for the segment, but some plastics and switchgear look low-rent. That being said, there are plenty of bright spots including a modern design, a classy climate control system and stylish metallic accents.

Four-Cylinder Power With A Hybrid On The Horizon 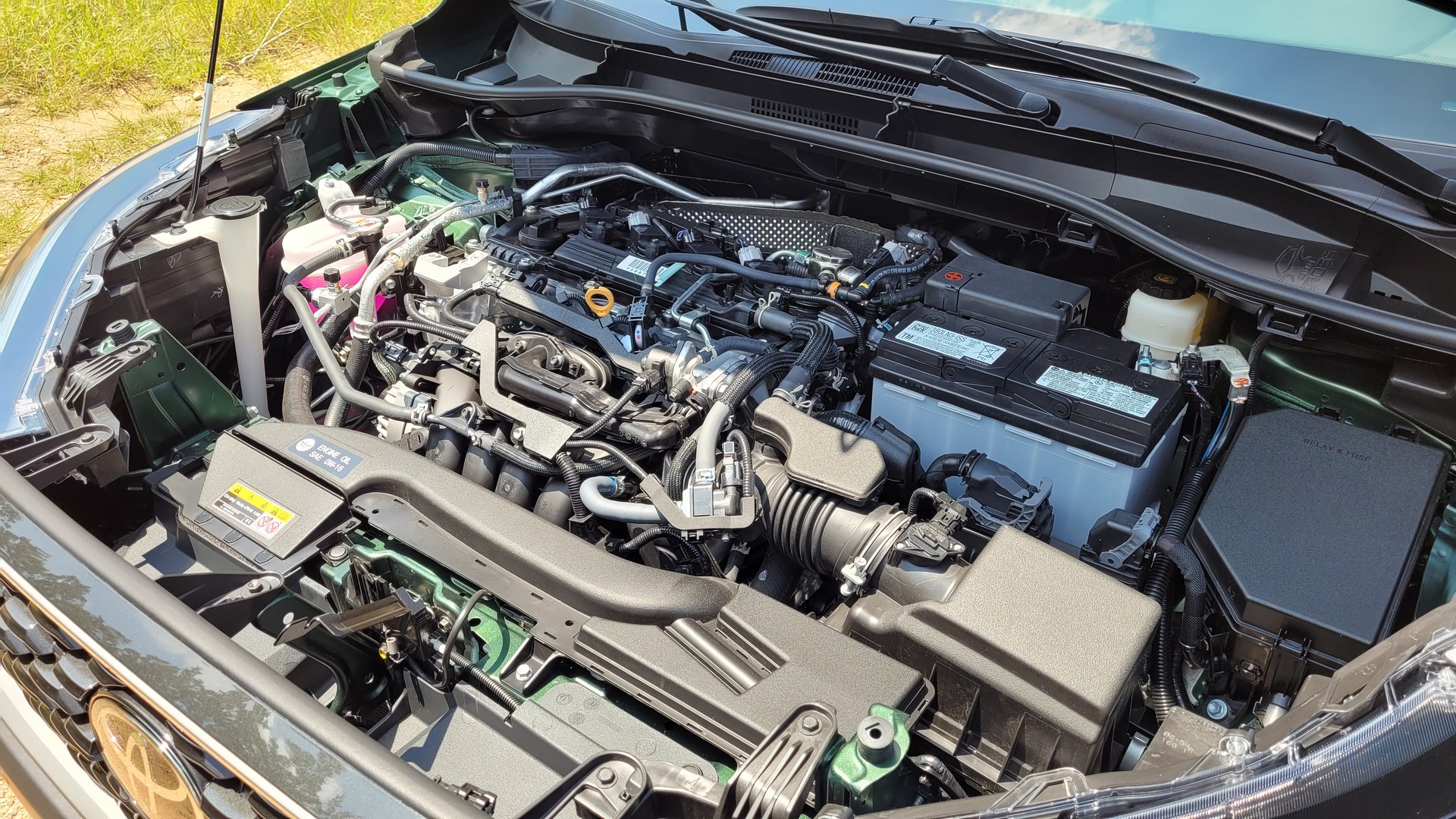 Like higher-end versions of the Corolla, the Corolla Cross is powered by a 2.0-liter Dynamic Force four-cylinder engine that produces 169 hp (126 kW / 171 PS) and 150 lb-ft (203 Nm) of torque. It’s more than adequate around town, but we kept the accelerator busy on the hilly outskirts of Austin, Texas.

More power would certainly be welcome, but the engine’s output is pretty competitive for the crowded segment. In particular, it easily trounces the Honda HR-V’s 1.8-liter four-cylinder with 141 hp (105 kW / 143 PS) and 127 lb-ft (172 Nm) of torque. However, it’s a closer battle with modern competitors such as the Seltos, CX-30, Taos and Trailblazer. 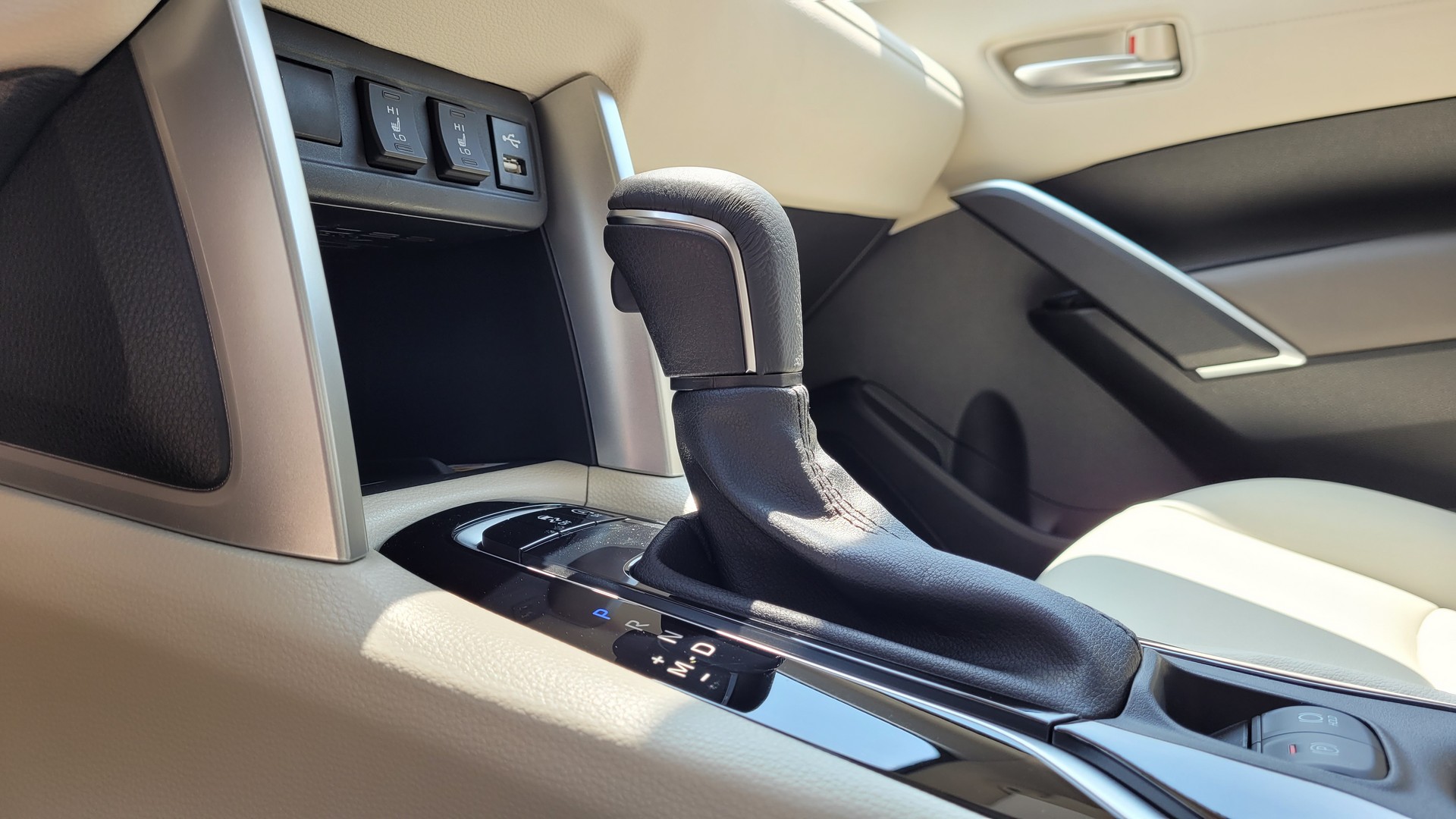 The engine is connected to a Direct Shift continuously variable transmission, which is sourced from the Corolla S. It’s notable for having a physical first gear that helps to improve acceleration as well as give the gearbox a more natural feel. While this might not appease the CVT haters, it’s an interesting idea and works pretty well in practice.

Those figures are competitive with key rivals and Toyota has confirmed plans for a hybrid variant. Little is known about it, but officials said we can expect to learn more details next year. 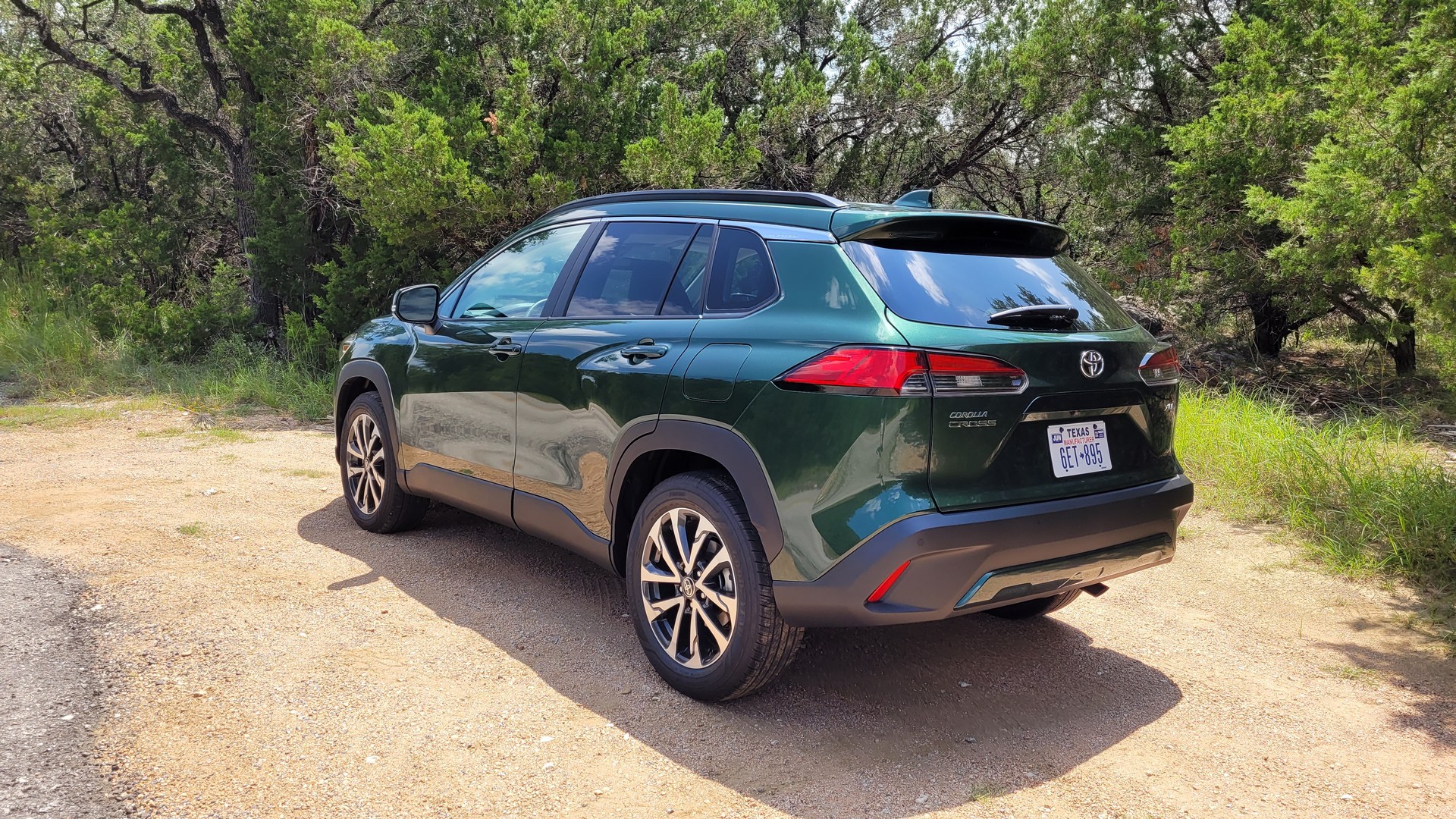 Like the Corolla and C-HR, the Corolla Cross rides on the TNGA-C platform and this serves as a solid foundation for the crossover while also enabling the model to tow up to 1,500 lbs (680 kg).

As is typical in the segment, the driving experience isn’t terribly exciting but it’s comfortable nonetheless. On the smooth roads around Austin, the Corolla Cross was well mannered as its suspension soaked up minor imperfections without fuss.

On the dynamic side of the equation, the Corolla Cross seems to offer capable handling. A more extensive test would yield a definitive result, but it didn’t protest on the twisty roads outside the city. It’s also worth mentioning body roll was virtually non-existent and the crossover felt planted, except when pushed to the limit. 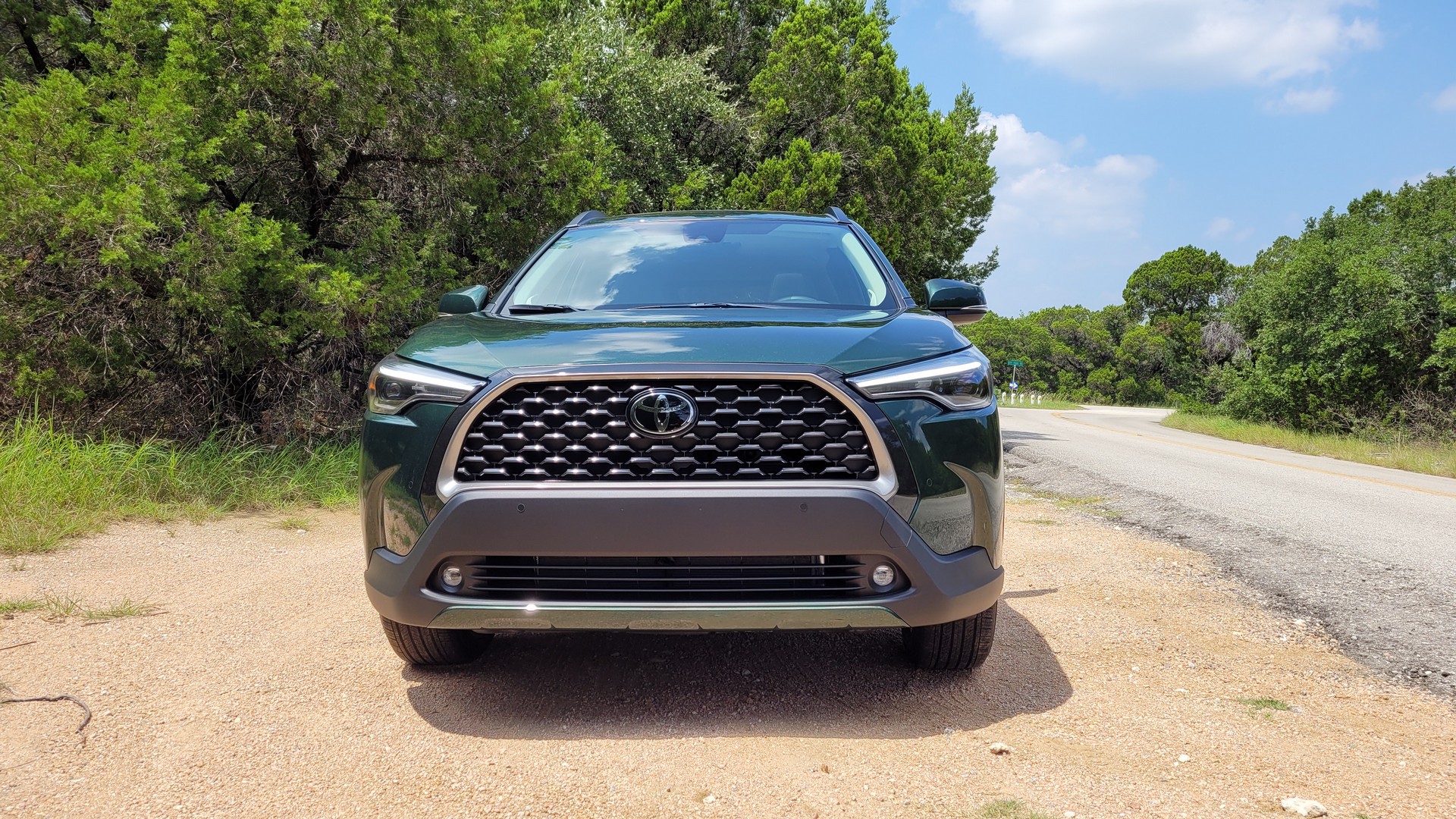 While the Corolla Cross comes standard with front-wheel drive, customers can upgrade to all-wheel drive for $1,300. That’s a bargain as many automakers charge between $1,500 and $2,000.

Speaking of the all-wheel drive system, it can send up to 50 percent of the engine’s power to the rear wheels and disengage when not needed. As an added bonus, all-wheel drive variants trade the standard torsion-beam rear suspension for a more advanced multi-link setup.

In typical Toyota fashion, the electric power steering system is tuned a little light for my liking but it’s still perfectly acceptable. The steering is also responsive, although it isn’t particularly engaging. 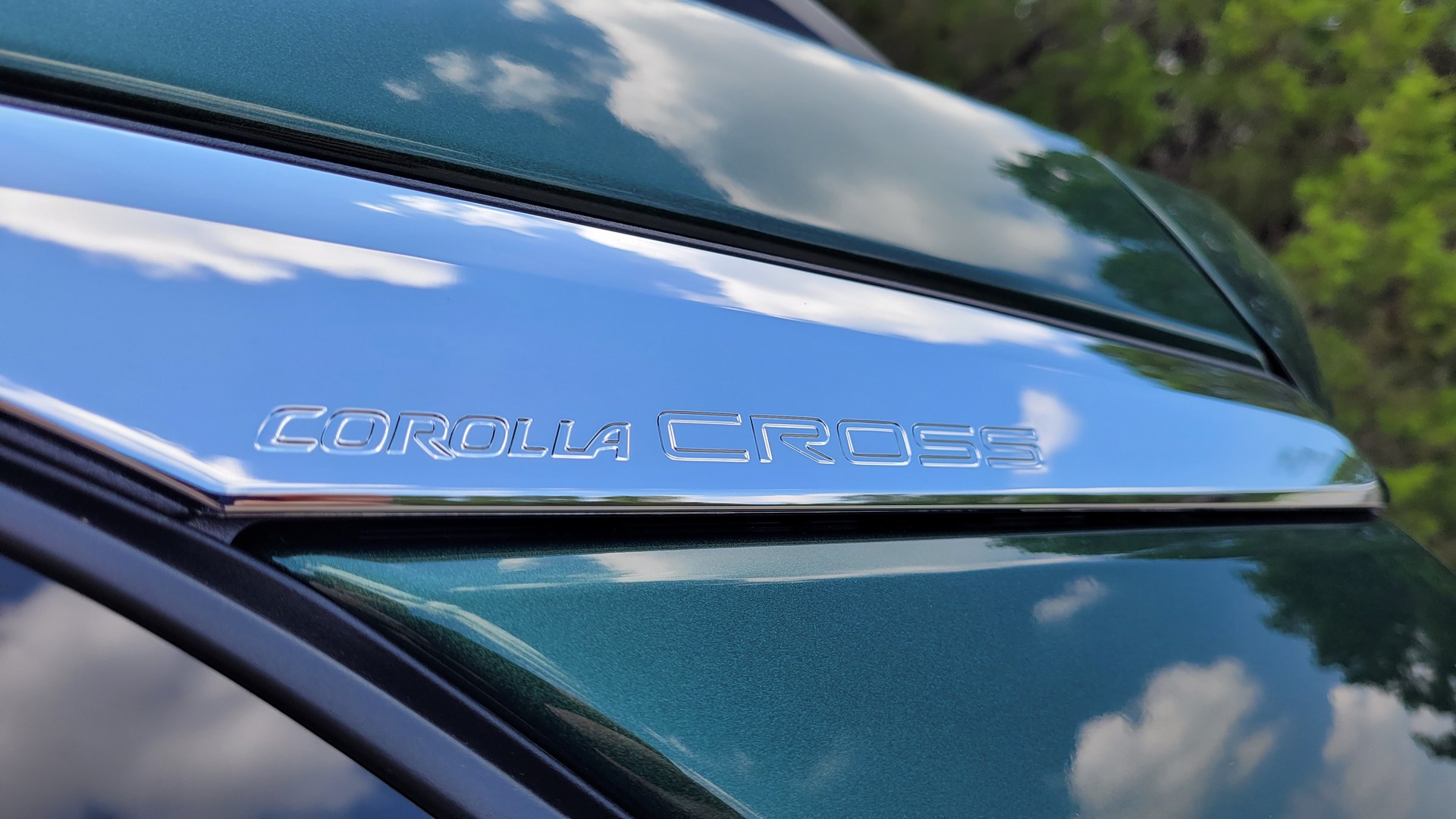 One of the biggest things about the Corolla Cross is its price tag. It starts at a reasonable $22,195 and you can get a well-equipped Corolla Cross LE with all-wheel drive for $25,845. Even the range-topping XLE starts at an affordable $26,325 before the $1,215 destination charge is factored in.

We’ll break down the pricing and equipment in a separate post, but the Corolla Cross costs $4,155 less than the 2021 RAV4 and that’s a significant saving. It’s also worth mentioning there’s only $500 separating the Corolla Cross and the C-HR, so the decision is a no-brainer unless you’re infatuated with the latter’s styling.

Despite the affordable price tag, the Corolla Cross comes with an impressive amount of standard safety equipment. Even the base model features Full-Speed Range Dynamic Radar Cruise Control, Lane Tracing Assist (lane centering), Road Sign Assist, and a Pre-Collision System with Pedestrian and Cyclist Detection. These are typically options and pretty expensive ones to boot.

A Welcome Addition To The Corolla Lineup 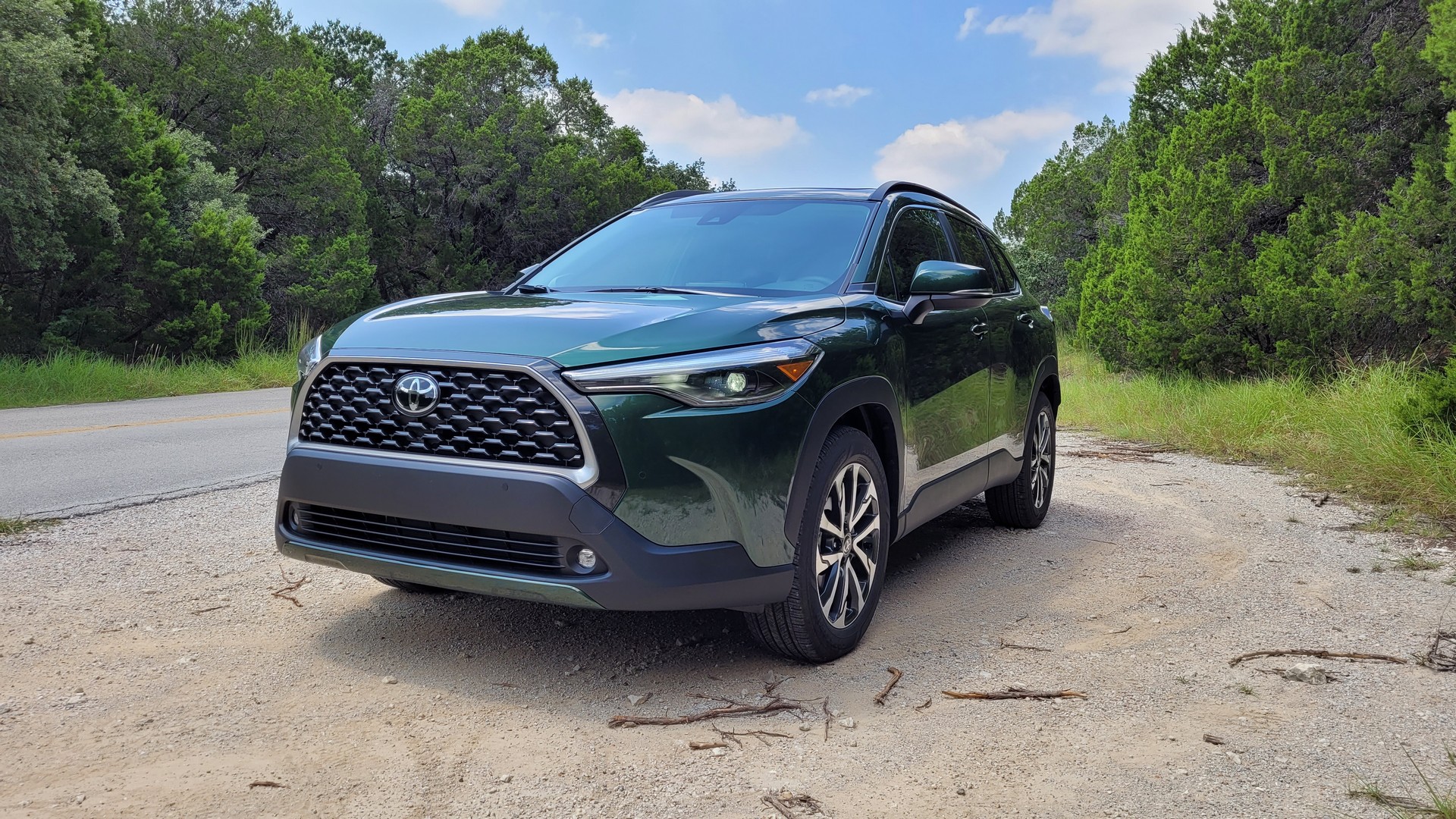 The Corolla Cross plugs a major hole in Toyota’s lineup as the company finally has an entry-level crossover that is available with all-wheel drive, the lack of which has hurt C-HR sales, but the model isn’t going anywhere as Toyota believes the segment is large enough to support two entries.

Furthermore, the Corolla Cross gives Toyota a natural stepping stone to the RAV4 and its affordable pricing should make the crossover appealing to young families, entry-level professionals, and parents shopping for new drivers in the family.

While it resides in a fiercely competitive segment, it has a number of things going for it including a comfortable ride, standard driver assistance systems and an agreeable interior. It’s also impossible to discount Toyota’s sterling reputation for quality and reliability, which will undoubtedly draw some customers into the fold.

That being said, a number of things seem average and customers can find roomier interiors elsewhere for similar money. It really comes down to where your priorities lie, but we have little doubt the latest addition to the Corolla lineup will be popular when it goes on sale in the United States this October.