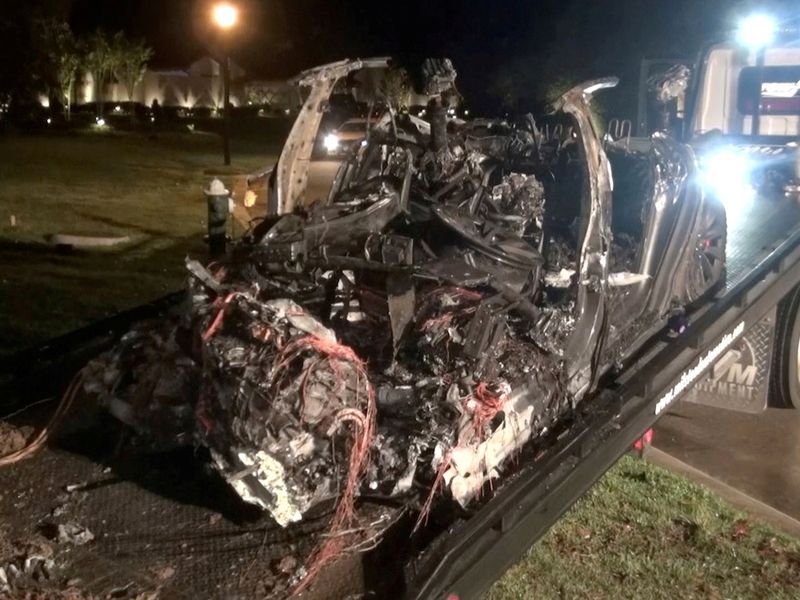 The Tesla owner killed along with a friend last spring in a fiery crash outside Houston had almost twice his state’s legal limit of alcohol in his system, an autopsy report first obtained by Bloomberg News shows.

The gruesome deaths of anesthesiologist William Varner, 59, and Everette Talbot, 69, in the wealthy neighborhood of The Woodlands on April 17 drew widespread attention because first responders found the driver’s seat was unoccupied.

Initial comments from local police said that “no one” was driving, which generated news headlines about a “driverless” Tesla and speculation on whether the Autopilot driver-assistance system on Varner’s car was engaged at the time of the crash. Tesla shares fell the next trading day and two federal agencies — the National Highway Traffic Safety Administration and the National Transportation Safety Board — launched probes.

The owner’s alcohol level at the time of the crash adds complexity to a case that has riveted Tesla owners, industry executives and safety advocates alike. Police and autopsy reports obtained by Bloomberg provide new details about the crash while doing little to solve its most enduring mystery: How Varner — whose home security camera showed him entering the car’s driver seat — was found minutes later in the left rear passenger seat of the burning Model S.

The two men were discussing the vehicle and its “self-driving ability” before taking the Model S for a short, high-speed drive that ended in flames, according to the police report obtained from the Harris County Constable’s Office via a public-records act request. Blunt-force trauma and thermal injuries were cited as the cause of both deaths, according to autopsy results obtained from the Harris County Institute of Forensic Sciences. Smoke inhalation also is cited as a cause of death in Varner’s autopsy.

The reports show alcohol in both mens’ bloodstream, consistent with statements in the police report that the men had drinks at dinner earlier that evening. Varner had 0.151g/100mL of ethanol in his blood after death, while Talbot’s reading was about 0.075g. In Texas, the legal intoxication limit is 0.08 percent.

“The toxicology results from the autopsy report shows that the blood-alcohol content is about two times the legal limit,” said Lee Ann Grossberg, a forensic pathology consultant in Houston who reviewed Varner’s autopsy report for Bloomberg. Grossberg provides expert testimony in both criminal and civil cases.

Though several names are redacted, the police report says the men and their wives had gone out to dinner prior to the accident and returned home around 9 p.m. One woman said her husband drank a beer before dinner and then 1-1/2 martinis while at dinner; the other man had a glass of white wine at dinner, according to the report.

The car was traveling “at a high rate of speed” when it drifted off the roadway, struck a raised curb, entered a grassy area, traveled about 100 feet, struck a tree and caught on fire, according to the police report. A neighbor observed “flames described to be like that of sparklers.” It went on to say that “the driver’s seat was unoccupied. The wives of the victims advised that they had just returned home from dinner when [the men] were talking about the vehicle and its self-driving ability. A short time later the two men departed their residences to do a test drive when the crash occurred.”

Varner’s widow could not be reached for comment. The Houston law firm that is working with Talbot’s family declined to comment on the autopsy and police reports.

The police report on the Houston crash doesn’t address why no one was found in the driver’s seat. In May, a preliminary report from the NTSB said images from the owner’s home security camera showed that Varner initially entered the car’s driver’s seat. Roughly half an hour later he was pronounced dead. When the car was found burning about 550 feet away, the doors were shut and Varner was discovered not in the driver’s seat, but rather behind it.

“The NTSB continues to collect data to analyze the crash dynamics, postmortem toxicology test results, seat belt use, occupant egress, and electric vehicle fires,” the regulator said in its May report. “All aspects of the crash remain under investigation as the NTSB determines the probable cause, with the intent of issuing safety recommendations to prevent similar crashes.”

Tesla’s Autopilot is a driver assistance feature and the carmaker warns on its website that its vehicles are not fully capable of driving themselves — something which would require regulatory approval. The Center for Auto Safety alleges Tesla has a history of deceptive advertising, and warn that the use of the term “Autopilot” leads consumers to believe that Teslas have more self-driving capabilities than they actually do. A few days after the crash, Consumer Reports said that under certain conditions Tesla vehicles could be tricked into operating with no one in the driver seat.

“This is completely false and those journalists should be ashamed of themselves,” Musk said.

Lars Moravy, Tesla’s vice president of vehicle engineering, said it was likely that someone was in the driver seat at the time of the crash.

Moravy did not respond to an email seeking comment about the latest details.

While Varner’s Model S was equipped with Autopilot, the car’s automated steering system appeared not to have been switched on, NTSB investigators said in their May report. An NTSB test of a similar vehicle showed other automated driving features could have been activated, but not the so-called Autosteer.