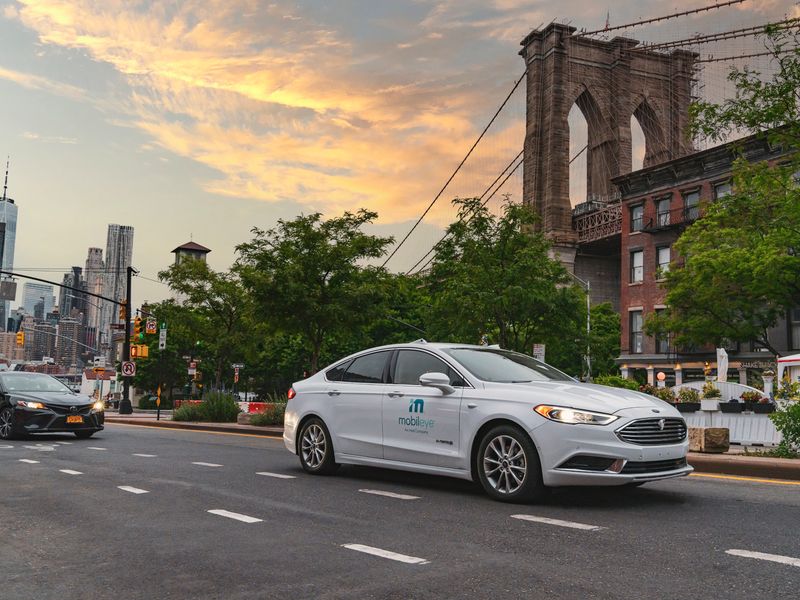 In a 40-minute video posted to YouTube, dashcam footage shows a car maneuvering around double-parked trucks, closed lanes, pedestrians and an endless stream of other vehicles on a trip from Midtown Manhattan to Queens—all while the driver keeps his hands off the wheel.

The footage, taken in July, is from a vehicle equipped with technology from Mobileye, an Intel subsidiary that is the first company to test a self-driving car on New York City streets. The arrival of the autonomous vehicle industry has prompted action from the city—with Mayor Bill de Blasio’s administration launching a permit process for companies testing self-driving cars.

The effort is an early step in a long road of technology advances and policy challenges that experts say will be required for wide-scale adoption of autonomous vehicles.

“New York City has probably the least predictable street environment in the country,” said Sarah Kaufman, associate director of the NYU Rudin Center for Transportation Policy and Management. “Cars will have to be made ready to manage an environment with pedestrians, blocked-off roadways, construction, unloading trucks—that will require a highly intelligent vehicle.”

The city Department of Transportation held a hearing Wednesday on the proposed autonomous-vehicle testing permit, which would add to an existing state certification program.

The permit has received pushback from several industry players including the Self-Driving Coalition for Safer Streets, a group representing Alphabet’s Waymo and other autonomous-tech companies. General counsel Ariel Wolf questioned an “unprecedented” requirement that the city be indemnified against legal liability from the vehicle trials. Additionally, the permit would require companies to certify that their autonomous vehicle is safer than a human driver.

“Since there is no widely accepted method for making this comparison,” Wolf said, the requirement “may discourage AV operation in the city, as companies would be unsure of how to make this certification.”

The permit also would require that companies pay $5,000 per year, keep a human supervisor in each test car and stay within certain zones.

Some residents at the virtual hearing voiced concerns about the risk of having technology tested on city streets.

There are more than 100 active testing sites for autonomous vehicles across the country, according to federal data, including Waymo driverless taxis in the suburbs of Phoenix. But outside of tests on private streets in the Brooklyn Navy Yard launched in 2019, autonomous vehicles had avoided the complicated streets of New York.

The city represents a crucial market for the industry’s future, however.

“The whole metro area is easily the highest-demand marketplace for taxi-based services in the U.S.,” said Adie Tomer, a senior fellow focused on metropolitan policy at the Brookings Institution. “That matters, because the first movers on self-driving vehicles will be, by all market estimates, fleet-based services.”

The permit plan marks the first of several local policy challenges that self-driving cars are likely to bring, as described by Kaufman and Tomer. There is the potential displacement of more than 200,000 professional drivers in the city; the privacy and storage issues concerning the huge amounts of data that self-driving cars collect; and the need to ensure self-driving cars do not contribute to congestion, which has been heightened by the Covid-19 pandemic.

“There are also equity questions about how we can deploy these services,” Kaufman said. “Private-sector services focus often on the most potentially profitable neighborhoods. We need to make sure a diversity of New Yorkers who want access to these services have it.”

‘Class of its own’

Mobileye, best known for developing advanced driver-assistance systems, launched its driverless test vehicle, a white Ford sedan, under a permit from the New York State Department of Motor Vehicles. The company, purchased by Intel for $15.3 billion in 2017, equipped the vehicle with a camera-based system that analyzes the environment surrounding the car to feed software that mimics the action of a human driver.

The technology is adapting in its early tests by picking up certain local behaviors, as Mobileye CEO Amnon Shashua said in a July event announcing the launch. That includes slowly shifting into crowded lanes and “nudging” toward pedestrians from a safe distance rather than stopping completely when one is in sight.

“Jaywalking in New York City is really a class of its own,” Shashua said.

Chen Feng, an associate professor at the NYU Tandon School of Engineering, said services built around driverless vehicles could come within the next decade, but there are plenty of technical challenges ahead. Closely tracking the location of vehicles can be tricky near tall buildings, for instance, as can mapping city streets with constant lane closures and new obstacles.

“When you talk about a larger scale deployment, especially into crowded urban areas, there are factors to consider that go well beyond the technology and need to be discussed by society and policymakers,” Feng said.